When Will Swami Lakshmanananda’s Killers Be Brought To Justice? 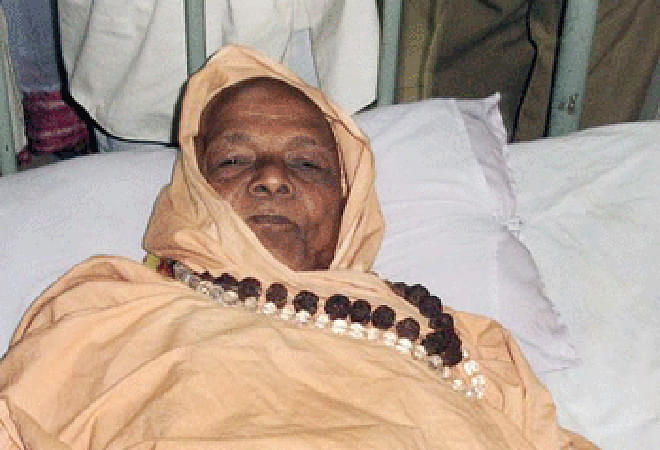 Eight years ago, on this holy day of Janmashtami, Vedanta Keshari Swami Lakshmanananda Saraswati was brutally killed along with four of his followers at his Jaleshpata Hermitage in Odisha’s Kandhamal district.

It was 8pm on 23 August, 2008. Swami Lakshmanananda was busy in a spiritual discourse along with his followers. As many as 30 masked men, armed with guns and axes, barged into the swami’s ashram and pumped several bullets into the frail body of the 84-year-old sanyasi and four of his followers. A female saint was also among those killed. After spraying the bullets, the assailants cut Lakshmanananda’s leg joints and wrists.

Six months after the brutal killing of Lakshmanananda and four of his followers, Maoist leader Sabyasachi Panda claimed responsibility for the gruesome murder in an interaction with three Left-leaning journalists of Odisha – Sampad Mahapatra, Prafulla Das and Apurba Mohanty – in a deep forest hinterland.

Sabyasachi Panda — who is currently in Berhampur Circle Jail — had allegedly carried out the gruesome crime through two of his key lieutenants – Azad and Uday. Azad is currently lodged in Jharpada special jail in Bhubaneswar and Uday is in Kandhamal jail.

The Maoists might have pulled the trigger on the 84-year-old sanyasi, but several intelligence inputs suggest that the heinous crime was committed at the behest of Christian missionaries. Intelligence sources further indicate that a US-based Pentecostal Church funded Maoists to execute the attack on the revered Hindu monk.

Panda has said on record that most Maoist cadre in Odisha are Christians, pointing to a deeper Missionary-Maoist nexus in Swami Lakshmanananda’s murder.

Before the fatal attack, there were nine attacks on Lakshmanananda. It was common knowledge that every attack had a missionary hand behind it.

In December 2007, Lakshmanananda was seriously injured in a violent attack at Daringbadi, the centre of missionary activities in Kandhamal. The attack was allegedly masterminded by Radhakant Nayak, former Congress Rajya Sabha MP and chief of the missionary organisation World Vision. Following the attack, several complaints were registered to boost the swami’s security. But they all fell on deaf ears of the Naveen Patnaik government.

On 13 August 2008, a letter threatening Swami Lakshmanananda was circulated among the Kandhamal district administration and state authorities. A copy of this letter was also sent to Lakshmanananda.

On 22 August, 2008, the swami appealed to the district magistrate of Kandhamal to strengthen his personal security. But surprisingly, police protection was thinned down at his Jaleshpata ashram.

The next morning, on 23 August, local media flashed the news that the life of Lakshmanananda was under threat. In the evening, the swami and four of his followers were killed during the spiritual discourse.

This outlines an abysmal administrative failure by the Naveen Patnaik government to protect a social reformer from terrorists. Till date, the Odisha government has not bothered to give any explanation on the serious lapses.

Ashok Sahu, Assam’s former additional director-general of police and senior Odisha BJP leader, says the conspiracy to kill Laxmanananda was hatched in a meeting convened by Christian missionaries at Raikia Community Centre of Kandhamal on 9 August, 2008.

“Nakul Nayak, former Lok Sabha MP from Phulbani, was among those who attended the meeting along with some Catholic priests,” Sahu said.

“Dayal was imparting theological training at Baliguda, 40km away from Jaleshpata, since February 2008. He left for Bhubaneswar only the previous day of the murder along with the then Congress Rajya Sabha MP Radhakant Nayak and then Archbishop Raphael Chinnath.”

Born in 1924 in Anugul district of Odisha, a young Laxmanananda left home for Rishikesh and practised sadhana in Himalayas caves for nine long years.

In 1966, he joined the Goraksha Andolan (anti-cow slaughter movement). It was in those days that Laxmanananda came in close contacts with MS Golwalkar, then sarsanghchalak of the Rashtriya Swayamsevak Sangh (RSS). Golwalkar once told him, “Swamiji, cannot you hear the call of Bharat Mata and Gomata?” These words rang in his ears and prompted him to dedicate his life for the cause of the motherland.

In 1967, Laxmanananda returned to his home state to spearhead the Goraksha Andolan. Meanwhile, the Sangh requested him to go to Kandhamal (then a part of the erstwhile Boudh-Kandhamal district) to serve the poor tribals and to combat the rampant conversion by the Christian missionaries.

Swami Lakshmanananda fought fraudulent conversion by Christian missionaries. He was working for the socio-economic well-being of the marginalised and indigent in Kandhamal and thereby earned the ire of the missionaries who use charity as a façade to convert people away from their native faith.

Lakshmanananda exemplifies ‘Manava Seva is Madhava Seva’ (Service to mankind is service to God). “Never have fear of death when you are working for the cause of the motherland.” Those were his last words.

Swami Lakshmanananda was relentless in his struggle for the cause of the tribal welfare for nearly four decades. Undoubtedly, he crafted a new template for selfless social service. His work will inspire many others for generations to come.

Two commissions of inquiry were set up to investigate Lakshmanananda’s murder. In November 2008, the Odisha government had appointed Justice Sarat Chandra Mohapatra as the one-man commission to probe Lakshmanananda’s killing and the subsequent riots in Kandhamal. In July 2009, the SC Mohapatra Commission had submitted its interim report to the Odisha government. The commission took serious note of the rampant religious conversion in Kandhamal by Christian missionaries.

In 2012, justice Mohapatra passed away, and justice AS Naidu was appointed to head the one-man probe panel. In December last year, the Justice Naidu Commission submitted its report to the Odisha government. It has been eight months since the report was submitted. But no one knows its contents. As per the provision, the state government is supposed to present the report on the floor of the assembly along with an action taken report. But the Naveen Patnaik government choose to sit on the Naidu Commission report.

It seems that the Odisha government is not even willing to probe the conspiracy surrounding Swami Lakshmanananda’s murder. While the Naveen Patnaik government never pays heed to civil society’s continuous demand for a CBI probe into the murder, the ongoing inquiry by the state crime branch has failed to establish the source of the conspiracy.

Eight years have passed and the masterminds of the heinous act are still at large. This brings into doubt the sincerity of the Naveen Patnaik government to pursue the case.