Why Bengal Is A Safe Haven For Islamist Terrorists 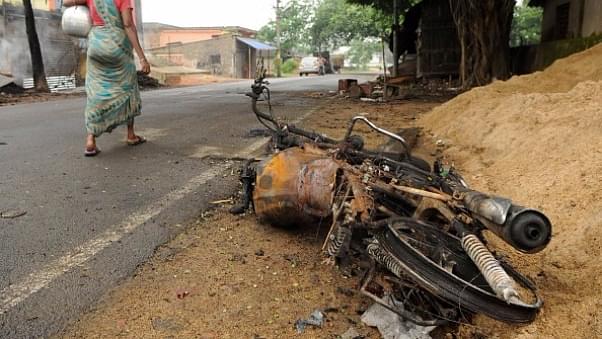 The arrest of two Bangladeshi Islamist terrorists on Tuesday (21 November) is not just another case of intelligence agencies busting a terror module. The arrests hide a darker, and deeper, secret – Bengal has, for many years now, been made a safe haven for Islamists by (first) the Marxists and (now) the Trinamool, and the Islamists are funded by the hawala operators and money launderers who operate with impunity from Kolkata.

Islamist radicals from Bangladesh, especially those belonging to the Jamaat-e-Islami, the Jamaat-ul Mujahideen Bangladesh (JMB), the Ansarullah Team Bangladesh (ATB) and the al-Qaeda in Indian Subcontinent (AQIS) – all of them having strong links with Pakistan's Inter Services Intelligence (ISI) – have always found it very easy to slip through the porous Indo-Bangladesh border into Bengal. The state Chief Minister Mamata Banerjee may glibly and conveniently blame the Border Security Force (BSF) for failing to intercept the infiltrators at the international border, but the undeniable fact remains that these Bangladeshi Islamists find easy and safe havens in Bengal, thanks to the politics of minority appeasement that has been pursued by successive regimes in the state.

Thanks to this blind and suicidal policy of appeasing minorities, Bengal provides an ideal political and social ecosystem for Islamists to carry on their insidious anti-India activities unhindered. The terror network that is thus created is then funded by hawala operators who have close ties with the Middle East and Pakistan. It is a fact that Kolkata has become an important hub of hawala operators and a lot of black money belonging to politicians and businessmen from the rest of the country is routed through these operators to South East Asia and other parts of the world. These operators enjoy the protection of the ISI and other agencies which facilitate their money laundering operations.

According to senior Intelligence Bureau (IB) sleuths, some politicians in Bengal are closely linked to the hawala operators and provide protection to them. These hawala operators are also a major source of funds for a major political party in the state, say IB officials. Some leaders of this political party are Islamist hardliners and have strong links with Islamist groups, some of which have even been proscribed. “This political ecosystem in Bengal facilitates the presence of Islamist terror modules. It is easy for Islamists from Bangladesh to escape to Bengal and get citizenship and other documents from the state,” said a senior IB officer who is currently in Kolkata.

Also, the state government’s strange and dangerous reluctance to act against Islamists has led to a perilous state of affairs. These Islamists are sheltered by clerics who have strong links with Trinamool Congress politicians. With the state machinery, including the police and its investigating arms, controlled very tightly by the functionaries of the ruling Trinamool Congress, the Islamists feel safe and operate with alarming impunity in Bengal.

The Bengal police’s eagerness to protect Islamist terrorists was exposed when it attempted to obliterate evidence after the Khagragarh blasts in Burdwan in October 2014. The state had strongly resisted the move by the National Investigation Agency (NIA) to probe the blast in a house rented by a Bangladeshi who had illegally entered Bengal and was enjoying the patronage of some politicians. The NIA probe then went on to reveal the strong Islamist terror network in Bengal that had the patronage of some politicians.

According to IB officers, demonetisation had dealt a big blow to the Islamist terror modules in Bengal. But thanks to the money launderers in the state who received huge sums of money from opposition politicians and businessmen from across the country for conversion to new currency, the Islamist terrorists are back in business in Bengal.

The Bengal police has not been proactive in cracking down on Islamist radicals in the state. The state police has also, often, been very reluctant to share information about Islamist terrorists with central intelligence agencies. This, say IB officers, stems from Mamata Banerjee’s rabid anti-centre stance and her opposition to state officials maintaining close links with their counterparts in Delhi. This works to the advantage of the terrorists. In fact, Tuesday’s arrests of the two Islamist terrorists (belonging to Bangladesh’s ABT) from Kolkata came after tip-offs from and repeated prodding by the IB.

Corruption and terror have close links, point out top IB officers. Black money generated by corruption is laundered and parked in safe havens abroad by hawala operators who have to seek protection from external agencies like the ISI, who often have their anti-India agenda. These agencies use the hawala operators to fund terror networks. Add to this the policy of minority appeasement, and what emerges is a toxic mix that endangers the security of the nation.