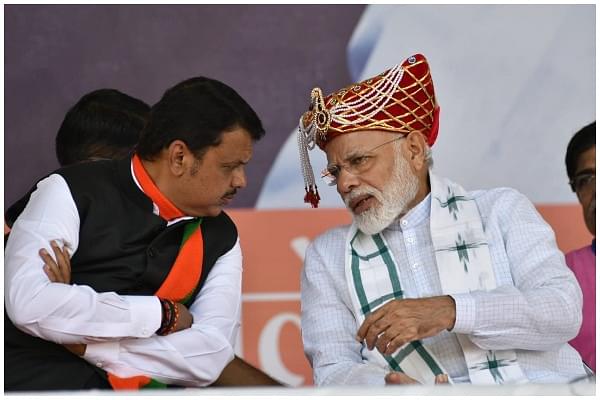 After Devendra Fadnavis informed the people of his decision to step down from the post of Maharashtra Chief Minister, a large group of mostly self-flagellating BJP supporters as well as assorted analysts started talking about how Fadnavis and BJP “lost moral ground” by the gambit last week where they tried to ally with NCP leader Ajit Pawar by inducting him as Deputy Chief Minister of the state.

While this form of virtue-signalling from social media warriors isn’t new, it is altogether too easy to miss the woods for the trees and hence, a quick write-up on why, even if it didn’t succeed, BJP’s attempt to retain power is a net positive for the party as well as state politics as a whole.

To begin with, those who think Fadnavis and BJP have ‘lost face/moral ground’ are assuming a standard of morality that an ordinary voter, under no pressure to live up to her social media following, rejects as simply too unrealistic.

Had it not been so, the same Ajit Pawar that the critics seen as morally irredeemable would not have registered the biggest margin of victory in the election.

Voters understand and accept realities of the political marketplace, and, in fact, have no patience for politicians who refuse to play the game.

Outside the virtue-signal enhancing echo chambers, such refusal is seen as a sign of weakness.

It is also important to remember that the mandate won by BJP under Fadnavis’ leadership essentially belongs to the ordinary voters of Maharashtra who not only sent a record 70 per cent of BJP candidates to the Assembly, but also voted for many Shiv Sena MLAs as part of strategic alliance voting.

In this light, BJP owed it to its voters to explore all possible avenues to respect their mandate. Engineering a split into an opposition that fired the first salvo by luring away your alliance partner is fair game in this rough and tumble style of politics.

If leaders like Fadnavis had chosen to shy away from this to protect their personal reputations, it would have meant protecting Fadnavis’ record was being prioritised over respecting voters’ wishes.

In the given limitations, a government with BJP as the senior partner and Fadnavis as the chief minister reflected the mandate of the people with greatest accuracy.

BJP’s effort to give such a government must be seen as an indicator of how much it values the popular will expressed through the ballot-box.

The tactical importance of this isn’t lost on anyone either. Friday night, Uddhav went home planning for a coronation the next day. Half a week later, he still had to put up a great struggle. Though eventually, and at least for now, he got what he wanted.

In football terms, this was like a muscular tackle when a goal from the opposition seemed certain. Even when the outcome isn’t eventually avoided, one must have some admiration for a side that plays hard and cedes no ground.

Let’s also not forget how did we reach this situation. It was Shiv Sena who chose to stomp upon the mandate by first trying to hold BJP hostage, and then by allying with the parties it fought the election against.

Sena’s claim of some behind-closed-door agreement on CM’s post is fooling nobody. Due to the mainstream media’s blatant bias against BJP, and their fawning admiration for Sharad Pawar, Shiv Sena has got a free pass in spite of setting a very dangerous precedent.

There is no doubt that Shiv Sena’s actions would continue to haunt India’s electoral politics in the days to come. By forcing Uddhav and team to run to the Supreme Court on a Sunday, and subjecting their MLAs to the hilarious spectacle of a parade, BJP has imposed costs on its former ally and sent a message to other allies in future.

As counter-intuitive as it sounds, this might act as a deterrent for smaller, regional parties, and make them follow the dharma of pre-poll alliances better than Shiv Sena did.

“So then why should it be called a party with a difference” you ask? Well, the difference, my friends, lies in the fact that BJP didn’t break the ceasefire.

They fought elections on pre-decided terms, and kept their part of the bargain after winning. Their response was solely brought on by Shiv Sena’s unilateral actions.

Most of us understand the difference between beating someone up for selfish motives (say in order to rob), and self-defence.

As long as BJP doesn’t walk away from an alliance after the results, its higher moral ground remains safe.

This episode has brought the long existing fault lines within the NCP to the fore, that might be exploited in future by one of its opponents.

It has also put Uddhav Thackeray on notice, knowing that BJP hasn’t given up. A three-party alliance is tricky at the best of the times.

Knowing an aggressive and motivated opposition is waiting to pounce might make Uddhav’s job even trickier.

The fact that the average voter sees his predicament primarily as brought on by his personal ambitions wont help matters either.