Why Brahmin Priests In Govardhan Are Angry With Yogi Adityanath 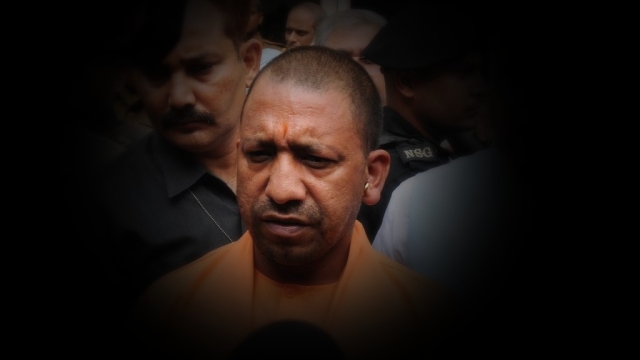 All is not well in Yogi Adityanath's Braj. The issue of temples, arising this time in Uttar Pradesh, another state ruled by the Bharatiya Janata Party (BJP), has riled up Brahmins in the land of Krishna and his leelas.

Govardhan, a prominent pilgrimage centre, situated near Mathura, is one of the sacred heritage sites known for the Govardhan Hill, which Krishna is believed to have lifted to protect the people of Braj from the thunder, rain and floods lashed and showered by Indra. While Yamuna is a flowing reminder of Krishna, Govardhan is celebrated as the sthhai chinnh, his stationary symbol.

In the three prominent temples, the deity is worshipped in the form of a stone. People from across the world, Hindus and devotees, those from the Vallabh and Vaishnav sampradayas, visit the three temples and Govardhan Hill for parikrama, a ritual where a 21 km stretch (saat koas, in Hindi) is covered on foot or in dadavat parikrama. Some sadhus and rishis perform a 108-dandvati parikrama, which is tough and long. The parikrama is a quiet journey through Govardhan, its lanes and green areas also marked with sacred water bodies – Kusum Sarovar and Mansi Ganga Lake. The Yogi Adityanath government, on National Green Tribunal (NGT) recommendations, is looking at restoring the essence of the parikrama.

The Press Trust of India (PTI) reported earlier this month that preparations were "underway to acquire and manage" these three temples in Govardhan and that the UP government has said that acting on orders of the NGT, a shrine board for the protection of Govardhan would be set up.

Welcoming, reluctantly, the setting up of the shrine board, Brahmins affected by Uttar Pradesh government's acquisition bid are protesting against, what they understand, is the government's move to control the three temples. Manish Sharma, sevayat purohit at Daanghati temple says, "The government's move towards temple acquisition is an attack on Brahmins. We have been at the forefront of seva. We rely on the temples and related activities for our income. Temple acquisition will take away our seva and our source of income. What will our families do?"

Sharma warns that the protests could escalate in February. He adds, "We approached Shrikant Sharma, cabinet minister in Yogi Adityanath-led government. He has said that he will take the matter to the chief minister."

Meanwhile, their protests are catching momentum and even some heat in the winter chill. On Wednesday (17 January), sevayat purohits, priests of the three temples, performed the “Buddhi Shuddi” yagya at Daanghati temple. They made offerings to the holy fire, praying for the purification of wisdom for three men – Prime Minister Narendra Modi, Yogi Adityanath and Shrikant Sharma.

The priests describe the acquisition move as "anti-Brahmin and anti-Hindu". "What sort of hindu-vaadi governments do we have in Uttar Pradesh and the centre? They want to take over temples. They are losing wisdom and really need "Buddhi-Shuddhi". We have performed this yagya to help them think bigger and better," Sharma adds.

According to Sharma, Uttar Pradesh Energy Minister and member of legislative assembly (MLA) from Mathura, the government is bound to follow recommendations from NGT and deliver on the front. In a telephonic conversation with Swarajya, the minister asserted that the matter will be handled with sensitivity and efforts will be made to protect the rights of the temple sevadars. He said, "The government will consider the welfare of the sevadars of the three temples while addressing this issue. The three temples have their receivers. Sevadaaron ke hiton ka sanrakshan hoga. The shrine board has to be formed, as per recommendations from NGT, but, despite that, we will certainly raise the matter of the rights of the sevadars."

How did NGT come into the picture? Stage was set for these developments years before the Yogi Adityanath-led government came to power. The tribunal’s order came after Giriraj Parikrama Sanrakshan Sansthan, an organisation based in Mathura, raised several issues regarding municipal solid waste, discharging of solid waste into ponds, cutting down of trees, encroachment in the parikrama route, reserved forest land, public land and water bodies in Govardhan.

Among the 17 recommendations made in the order, the NGT had stated that:

“An independent organisation on the lines of other shrine Board in the country may be constituted for the proper management of this religious place, providing all the required facilities and maintain and upkeep the sanctity of holy places/ kunds, cultural heritage, environment protection, sanitation, pollution control, eco-balance of the Green cover which includes Kund, Pokhar, Talab and Jhari and related aspects.”

Irked by the non-compliance of its orders, NGT had warned of “coercive action” in 2014. And it seems that the current government in Uttar Pradesh doesn't want to leave any stone unturned in following NGT's orders and carrying out several other changes concerning the environmental realignment of Govardhan and its temple ecosystem.

In September 2017, the state government announced renewed compliance of NGT orders. The line of action might appear fair, so far. Yet, the locals have a perception that the Yogi Adityanath-led government is overstepping a bit.

Then, news reports from the regional press suggest that the build-up of anger, on what the locals understand as “interference” in the matter of temples – "private entities", is becoming thicker. The feeling emerging among the people of Braj is that the Braj Teertha Vikas Parishad, which was recently in the news for the rejuvenation of the Govardhan Parvat, a sacred site for Hindus, with Dwapar Yug flora, is not understanding the impact of acquisition on the priests and families involved. Though the setting up of the shrine board is as per the orders of the green court, the perception building up quickly is that the Yogi Adityanath government is whipping up an environment for the acquisition of the three temples in Govardhan, using NGT’s order.

Priest Manish Sharma adds, "We, the purohits of the three temples have not received any notice from the government so far. We came to know about the proposal to acquire the three temples through news reports filed from Lucknow, the power centre of Uttar Pradesh. The temples are private entities. Is the Hinduvadi government after temple money?"

With doubt comes the urge to defend. The priests say that they will protect their temples, tradition, and heritage from government control, without caring for who stops them, and do everything necessary to ensure no one goes after their temple money. "The offerings made by the devotees have helped nourish these three temples. We accept the support from the government for the upkeep of Govardhan, its natural and cultural heritage. But we are angry with the way the orders from NGT are being cited as the reason for temple acquisition," the priest adds.

A feeling of doubt lingers in the priest fraternity. Deepu Pandit, a priest from Daanghaati temple, says, "We are ready to cooperate with NGT and the government on environmental recommendations and rejuvenation drives. But the shrine board will drive us out from our temples. Perhaps, the differences among the temple societies have led to an impression that temples are mismanaged. Temple acquisition is regressive and uncalled for."

The opposition, too, could ruffle the issue soon. Vishvendra Singh, Congress MLA, Deegh-Kumher constituency, Bharatpur, joined the protests against the acquisition. He earlier asserted, in his interaction with the local press, that the Mukharvind temple belonged to his ancestors and now belongs to the Bharatpur Royal Family Religious and Ceremonial Trust. Singh wrote to Swarajya, "The High Court and Supreme Court have already ruled in favour of our Trust and the government or shrine board cannot supersede these rulings."

The controversy, if not calmed in time, could end up placing Adityanath on the wrong side of the plane in the cultural churning among Hindus in and outside Uttar Pradesh. "If the Uttar Pradesh government does not end its interference in temples, Purohits and Brahmins from across India will join us in protests," adds Manish Sharma.

The beginning of efforts and the steps being taken for the restoring of the glory of this sacred site should be supported and appreciated. However, there is a thin line that divides compliance of NGT recommendations and control of temples. The line should remain solid and sacrosanct. In Braj, in Uttar Pradesh, and outside.