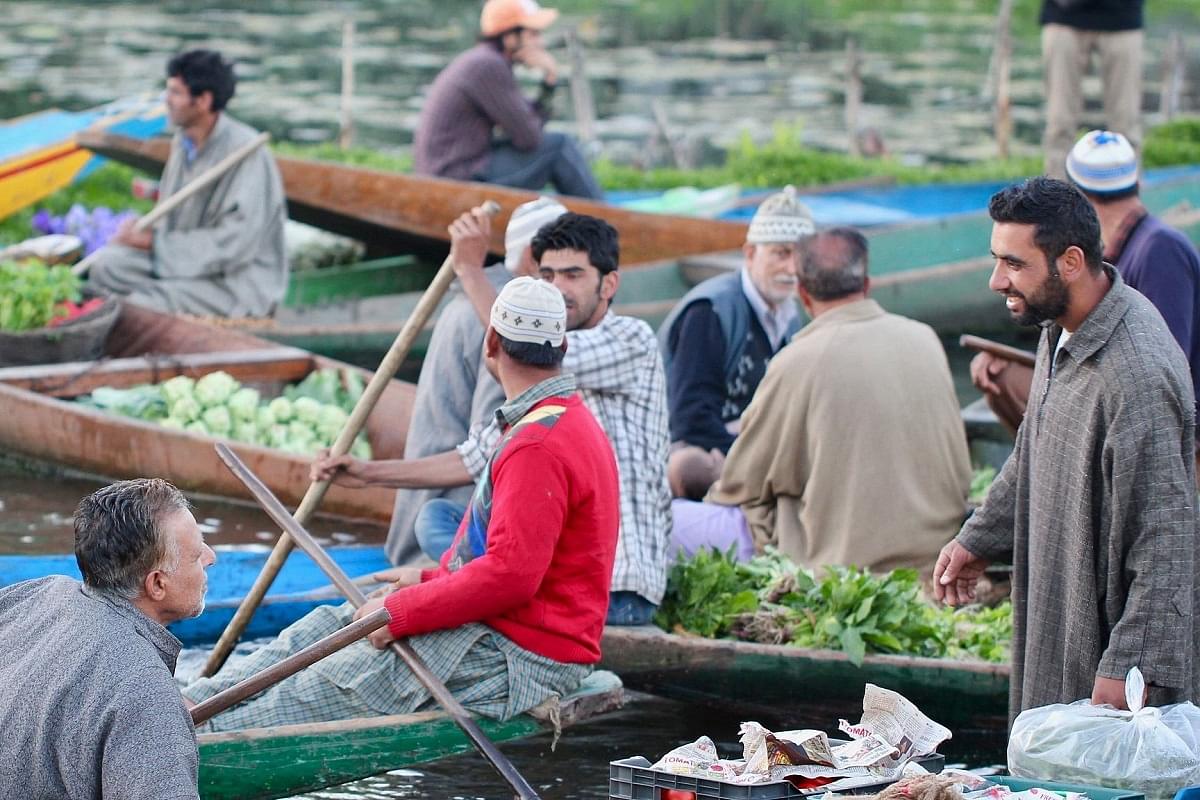 This week, Kashmir and Kashmiris were witnesses to five gruesome murders. In Srinagar, a renowned Kashmiri Pandit, Makhan Lal Bindroo was shot dead at his pharmacy, one that he had kept running even during the 1990s, at the peak of the exodus of the Hindus. Near the pharmacy, a vendor from Bihar, Virendra Paswan, was also shot dead. He used to sell chaat as a street vendor.

Outside Srinagar, in Bandipora, in northern Kashmir, terrorists gunned down Mohammad Shafi Lone, who was the president of the Sumo Union, a local transport traders’ body. The Resistance Front, a terror group, claimed responsibility for the murders.

As per some locals, Lone was targeted by the terrorist group because of his closeness with the army and for allegedly working as an informer. He was also instrumental in motivating young Kashmiris towards pursuing a pro-India cause.

Earlier today (7 October), two teachers, Satinder Kour and Deepak Chand were killed. According to the statement released by the The Resistance Front, the teachers were gunned down for asking parents to send their wards for 15 August celebrations.

In the last three decades, since the Hindu exodus, many different definition of Kashmiriyat have been floated, each suited to the political interests of the speaker.

For the local parties, Kashmiriyat is the tolerance of the local Kashmiri Muslim population against the 'invading nationalism' of Delhi.

For the extremists, Kashmiriyat depicts the 'will of the people to fight, endure, and overcome what they believe is an illegal occupation of their land by India'.

Historically, Kashmiryat was meant to denote religious and communal harmony where festivals, traditions, and culture of both the communities are celebrated with fervour. However, realistically speaking, that ship has long left the harbour and sunk.

In a world post the revocation of Article 370 and the spread of Covid-19, Kashmiriyat is beginning to acquire a new definition. No longer are the local parties in a strengthened position to hold on to their imaginary fight against the Indian state. No longer can the extremist elements in the valleys, supported by terrorist groups on the ground, use young innocent Kashmiris as the trigger, as was the case across late 1980s, much of 1990s, and early 2000s.

More than the military present in the valley, it is the local population that is now willing to unshackle the communal constraints of decades and embrace the new reality, one that favours their future.

Kashmir today, on ground, is a unique experiment. It is a transition of a majority of the population from the religious fanaticism sold to them for decades since independence by the likes of Abdullahs and Muftis to economic nationalism pitched to them by the Centre and the current government in the valley.

And therefore, it is all grey. However unfortunate, the episodes from earlier this week cannot be used to define Kashmir as a perpetual war-zone. At the same time, the curtailed extremism and curbs on other anti-national activities do not guarantee eternal peace in the valley. For every terrorist looking to gun down a Bindroo, there are thousands of tourists looking to visit the valley, thousands of locals willing to welcome them, as was the case this year. It is all too grey.

There are multiple shades within this grey.

Within the spectrum, one has terrorist groups like The Resistance Front. The Front is in a pursuit to hunt down any Kashmiri, irrespective of their religion, looking to work towards the cause of peace or with the pro-India forces. Thus, Bindroo or Lone, to them, non-locals and Muslims are the same if they are aligned to the pro-India cause.

Supplementing their efforts politically are the likes of Muftis and Abdullahs. While the Gupkar declaration is laughed off as a non-existing threat in the security circles, these local leaders along with their promoters in Delhi, are the biggest stakeholders of the conflict economy, a phrase used commonly to define the monetary and political incentives achieved by ensuring Kashmir continues to burn.

These stakeholders are visible everywhere. They are on news channels, giving hour-long interviews reciting the historic importance of Article 370 while negating the lack of development it led to.

They are on the pages of newspapers, opining how Kashmir was a heaven before 5 August 2019. Before the pandemic, they were in the fanciest hotels of New Delhi, hosting conferences, inviting think-tanks, and proclaiming themselves as the protectors of the population of Kashmir while denying them even basic infrastructure.

Within this grey spectrum, the average Kashmiri is also gaining prominence.

Today, an average Kashmiri above the age of 40 has more or less given up on the hope of any change, and any promises made to them are taken with a grain of salt. The pessimism is a result of years of terrorism and the political futility in tackling it. For the ones on the younger side of 40, there is hope, and for the ones in their teens and early twenties, the hope is supplemented by an untapped vigour.

Yet, many young Kashmiris continue to battle an internal conflict, for they are unable to find the answer to this one important question. Are they Kashmiris first or are they Indians first? If one puts this question to a room full of young Kashmiri Muslims, the answer is a lesson in diplomacy. Most say their belonging is situational, that is in Kashmir, they are Kashmiris first, and anywhere else in India, they are Indians first.

They cannot be faulted for this confusion or convenient diplomacy, for they have inherited it from their ancestors who themselves inherited it from the political realities of the day. It is this internal conflict and confusion the local parties, the stakeholders of the conflict economy, and the terror groups want to bank upon, and it is this very confusion the government today in the valley and the armed forces are trying to eradicate.

The government at the Centre, thankfully, is not oblivious to this reality and their efforts towards an integration are not restricted to Srinagar alone. Already, many initiatives are being undertaken across northern and southern Kashmir, including some of the terror hotspots like Pulwama, Sopore and Baramulla.

Many parliamentary delegations have also reached out to trader groups and lobbies to further an economic integration. Beyond tourism, investments in road and railways infrastructure, manufacturing, and agro-processing units are already being looked at. As of today, the government in the valley is anticipating investments to the tune of Rs 50,000 crore in the next two-three years.

The key to economic growth for the valley would require both a short-term and a long-term vision. Firstly, the low-hanging fruits need to be plucked, and therefore, as has been the case this year, tourism in the valley needs revival. This needs to be coupled with the revival of local industries hit by Covid, especially handicrafts. A dry port in Srinagar, a long-pending demand, could do wonders to the export worthiness of the state and the small business groups.

For the long-term, the government must start looking at logistics support for Kashmir. Today, for instance, it takes anywhere between 10 to 20 days for apples to reach Jammu from Kashmir, while apples from Himachal Pradesh are picked, packaged, branded, and marketed across India in less than a week through private investments and collaborations. The logistic support would do wonders for the local dry fruit economy as well.

Already, plans for a film city are being rumoured within the state. In conversation with Swarajya, the Lt Governor elaborated on how many Telugu directors are now visiting the valley to shoot long schedules of their movies. Healthcare and sports economy must also be given a boost with increased investments in infrastructure.

A case in point is that of the Army Goodwill Schools. Operated near cantonments, these schools boast of infrastructure that can put most government schools to shame across India, and offer education at a low price. These schools have been instrumental in ensuring that radicalisation does not take root in the newer generations. Alongside, various sports and cultural activities have been critical in ushering harmony between the two factions.

What about the Kashmiri Pandits?

On ground, the real estate and realities of Kashmiri Pandits are being eroded at a swift pace. The local parties may want to shed crocodile tears, but most Kashmiri Pandits have either moved on, aren't willing to go back, or have given up. However, for the ones who do wish to go back, the new age Kashmiriyat would warrant support not only from the state but also from the locals.

However, as was the case today and earlier this week, there shall always be endeavours encouraged and endorsed by political and terror outfits that would look to disrupt the process. Within the valley, an underlying tension shall always persist, and it is in this tension, that the new Kashmiriyat will have to carve out its identity.

At the end of this difficult transition is when a new Kashmiriyat will arise, one that is as Indian as in any other state, and one that is ready to unshackle itself from decades of religious fundamentalism.