Why Is The Bengal Government Trying To Whitewash The Kaliachak Violence? 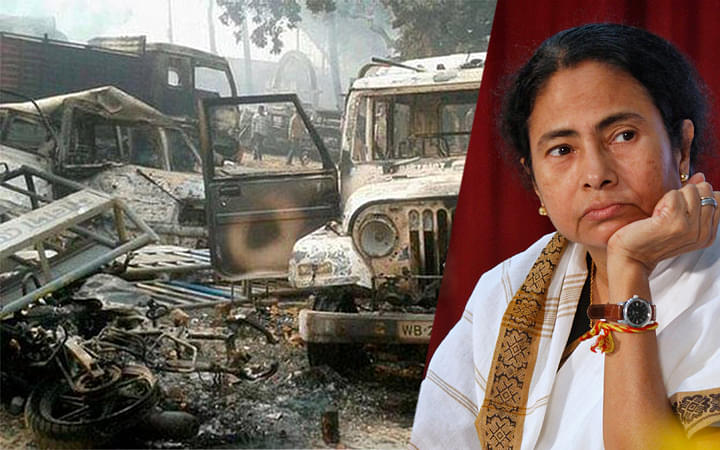 Is the state government trying to hide something nefarious by making claims that peace reigns now in Kaliachak in Malda?

News, in today’s age, is expected to travel at lightning speed. But it took a sensitive piece of news more than a month to travel about 750 kilometers from Uttar Pradesh’s capital to Kaliachak, a small town along the Indo-Bangladesh border in West Bengal’s Malda district.

The news was of a Hindu Mahasabha activist in Lucknow, Kamlesh Tiwari, making some disparaging comments about Prophet Mohammad in response to notorious Samajwadi Party leader labeling RSS pracharaks as homosexuals. And when it did earlier this month, the town erupted in flames.

Therein lies a grave mystery. A little-known Muslim religious group—Idara-a-Shariya—called for a protest meeting at Kaliachak at nine in the morning on 3 January. From early that morning, large crowds started congregating at Kaliachak from nearby villages and towns.

Belligerent men, young, middle-aged and old, clad in skull caps and lungis made their way through National Highway 34 that connects North Bengal with the rest of the state, to the dusty town of Kaliachak from seven in the morning.

And as if on cue, wild rumours started doing the rounds that BSF jawans in the vehicle had fired on ‘innocent’ Muslims. Some in the mob attacked the Kaliachak Block Development Officer’s office and ransacked it.

Another mob made its way to the nearby Khaltipur railway station, ransacked it, and occupied the tracks. The guard of a goods train that they stopped was assaulted severely.

It was then that policemen from the Kaliachak police station decided to control the mobs, but the presence of the khaki-clad had quite the opposite effect: instead of dispersing, the mob got angrier and attacked the police station.

About 20 vehicles inside and outside the police station were torched and a portion of the thana was set ablaze. What is telling is that the mobs brought out files and records from the police station and made a bonfire out of them on that cold January morning.

To be fair to the Idara-a-Shariya leaders, they made desperate appeals to the mob to calm down and not take the law into their hands. But those pleas fell on deaf ears and the organisers, by 10 am, decided to cut short their meeting to prevent more violence.

But the mobs were unfazed—they went on to vent their fury on Hindu households at Balidanga, a locality behind the Kaliachak police station.

A few shops were torched and some houses damaged. Someone fired at one Tanmoy Tiwari, 19, who sustained bullet injuries in his leg. Even a teenage girl was assaulted.

Reinforcements from Malda town, the district headquarters, could not enter the battle zone till three in the afternoon when the marauding crowds had already dispersed.

A lot of questions remain unanswered even 10 days after the flare-up. Primarily, what led to the violence? And why was this protest meeting held a month after the alleged blasphemy by a Hindu Mahasabha activist was committed?

This activist has been arrested and is still in prison and Muslims in many parts of the country had already held protest meetings demanding his hanging in early December itself. It is, of course, another matter that Azam Khan remains free.

A protest meeting being held a month after the alleged blasphemy obviously leads to the suspicion that the accompanying violence was pre-planned. But with what objective?

Kaliachak is a hotbed of Muslim fundamentalists and a den of criminals engaged in cross border cattle-smuggling, drug trafficking, gun-running, human trafficking and smuggling in fake Indian currency.

It is estimated that a large portion of fake Indian currency entering this country is through the Indo-Bangla border in Malda, especially the border villages in Kaliachak block. Also, in recent years, many villages in this block have turned to cultivating poppy from which opium is extracted.

One Asadullah Biswas, who was earlier with the CPI(M) and switched loyalties to the Trinamool Congress after the 2011 Assembly polls (like many fellow criminals) is said to be the local don who controls all crime in the area.

District police officers who did not want to be named said that Biswas masterminded the violence and the attack on Kaliachak Police Station with an ulterior motive—to destroy all crime files containing evidence against his gang of criminals and against Biswas himself.

And, also, to assert his supremacy by showing to the people of the area that he had the guts and the resources to not only engineer attacks on a police station, but also get away with it.

But the larger issue is the impunity with which the police can be attacked in West Bengal. And also the grave issue of appeasement of the minorities in the state.

The Trinamool government in the state, and to a large extent the Left Front government before it, has systematically undermined the police force and made it a poor adjunct of the ruling party.

The police have had to watch helplessly as criminals and ruling party-backed criminals have been taking the law into their hands and creating mayhem.

The appeasement of minorities has also reached endemic proportions in West Bengal. In order to cultivate them and get their votes, Chief Minister Mamata Banerjee and her government has been showering sops on them and has repeatedly turned a blind eye to transgressions—both minor and major—of the law by them.

Emboldened by the belief that they would not be touched, the mobs went berserk on 3 January. It was an ugly assertion of their religious identity and a brazen display of the immunity they enjoy under the current dispensation.

The state government claims that peace reigns now in Kaliachak and asserts that it wasn’t a communal incident. But whitewashing very dangerous facts—that the police have been reduced to an impotent force and the minorities in West Bengal can get away with mayhem—will have very adverse long-term consequences.

Keeping the police bound in chains and turning a blind eye to the minority community transgressing the law may help Mamata Banerjee win the Assembly polls a few months hence, but will bleed Bengal ultimately. And nor will keeping the BJP and other Opposition leaders away from Kaliachak keep a lid on the ugly truth from emerging.