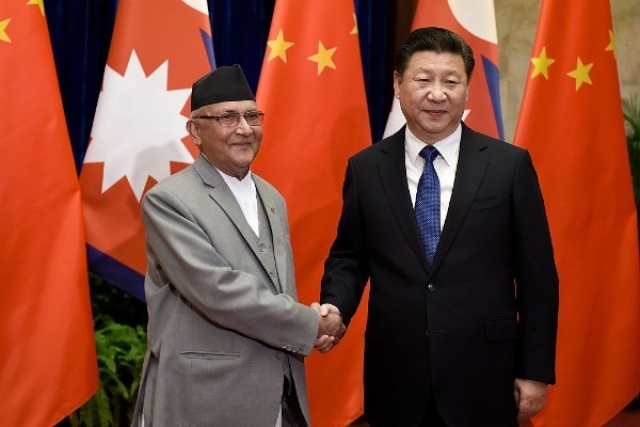 The deal Nepal has inked with China to construct a rail line between Kathmandu and Gyirong land port in Tibet could turn out to be a white elephant and will result in deep economic distress for Nepal. The agreement to construct the 160km rail line, which will link up with the Gyirong to Shigatse railway line now under construction, was one of the many that were inked during the visit of Nepal Prime Minister Khadga Prasad Sharma Oli to China last month.

The rail link to China (Kathmandu-Gyirong-Shigatse-Lhasa and then up to Beijing and Shanghai) is Oli’s pet project. “Oli has taken personal interest in this mega project hoping that it will reduce Nepal’s dependence on India for supplies of foodstuff, petroleum products, construction materials, medicines and many other goods. The blockade India imposed on Nepal in 2015 to punish Kathmandu (for adopting a new Constitution which India-backed Madhesis were opposed to) pushed Oli towards China. Oli had then signed a trade and transit treaty to facilitate supply of goods from China to Nepal through Tibet,” feels Ratanlal Bhandari, a Kathmandu-based political commentator.

But, say many experts, the rail link from Kathmandu to China via Tibet is a bad idea that will not be economically viable at all. Nepal and China have been engaged in talks over the project for the past few years, but it is only after Nepal formally joined President Xi Jinping’s pet Belt and Road Initiative that China has agreed to provide funds for the ambitious rail link. But as with all projects involving the Chinese, the details of this, including the estimated project cost, remains shrouded in secrecy. However, according to this Reuters report a year ago, the project would cost a whopping US $8 billion.

However, the Nepal finance ministry official who gave out this US $8 billion figure would have included the cost of China’s own under-construction 540km rail link from Shigatse to Gyirong that is expected to be completed by 2020. The rail link from Gyirong to Kathmandu, says China, can be ready by 2024. Nepal foreign ministry sources said that the Kathmandu-to-Gyirong link would cost about US $4 billion. That is more than the US $3.5 billion that China spent on constructing the 1,956km rail line from Xining (capital of China’s Qinghai province) to Lhasa, which was completed in 2005. Even taking into account cost escalations, the Chinese estimate for the proposed Kathmandu-Gyirong rail link seems grossly inflated.

China, of course, has a history of imposing extortionist costs on projects it finances (that is, gives loans to at rates higher than the World Bank or other lending agencies) in other countries. For instance, China put a US $7.5 billion price tag on a deep sea port it is constructing in Kyaukpyu in Myanmar’s Rakhine province. A key aide of Myanmar’s popular leader Aung San Syu Kyi has dubbed the estimate “crazy” and “absurd” (read this article). Many experts predict that the port, in which the Chinese have already acquired a controlling stake, will turn out to be a Chinese debt bomb that will ruin Myanmar.

There are enough examples of this having happened and Hambantota port in Sri Lanka is just one. The US $1 billion port that Chinese-state owned firms constructed with loans taken from China’s Exim bank turned out to be a white elephant. Barely any ships docked at the port and ultimately, Sri Lanka gave away the facility on a 99-year lease to China for US $1.2 billion so it could write off its debt (read this article). However, Sri Lanka still owes at least US $5 billion to China and with the mounting interest, the amount will only balloon. China has ensnared Sri Lanka, Myanmar and some other smaller nations, in a debt trap. Nepal, too, would soon fall similarly.

A senior Indian diplomat who has served in Sri Lanka says of the Chinese modus operandi thus: “China dangles the carrot of fast-paced infrastructure development, industrial corridors and special economic zones to leaders of small and poor countries and paints a very rosy picture of that country becoming rich in no time due to such developments. Most fall for the bait and the Chinese then fund these infrastructure projects. What the countries don’t realise is that the Chinese operate very opaquely. China doesn’t allow these countries to take loans from multilateral lending agencies such as the World Bank and Asian Development Bank, and insists that loans for the infrastructure and other projects it executes in another country be taken only from China’s Exim bank or other Chinese funding agencies. Chinese loans are always costlier than other loans.

“The Chinese also insist that their own companies, preferably the state-owned ones, be given the contracts for executing the projects. The Chinese also don’t employ many locals, except as labourers, and there is no transfer of technology involved either. In effect, a country that falls for the Chinese bait takes loans from China at high rates and the money then goes back to Chinese firms that employ mostly Chinese people in these overseas projects. And since most of these projects turn out to be duds, or have limited economic viability at best, the countries are saddled with huge debts which they find impossible to repay. It is then that Beijing tightens the screws and demands huge concessions in keeping with its own long-term strategic and commercial interests, ” said the diplomat.

Kyaukpyu is yet another example of this schema. The Chinese have constructed a pipeline from the port to Yunnan for transporting fuel. It is constructing the port there and a mega industrial park where Chinese firms will set up units and employ mostly Chinese people. All this is being done only to serve its (China’s) own interests while Myanmar’s own interests figure nowhere in the programme. Beijing sees the Kyaukpyu port as a boon for the landlocked provinces like Yunnan, which border Myanmar and India. “Ships transporting fuel and other goods destined for these interior provinces of China will dock at Kyaukpyu instead of travelling around the Malacca Straits and all the way up to Chinese ports. China will thus save a lot of time and money. From Kyaukpyu, crude will go to Yunnan via the pipeline and other goods through an expressway China is constructing from the port to Kunming (the capital of Yunnan province). Chinese industrial units at the proposed SEZ at Kyaukpyu will receive raw materials and then manufacture finished products which will be shipped out from that port. And all this at Myanmar’s expense, since Myanmar will not gain much from the entire mega project, but will only be saddled with huge debt. China may, at best, pay meagre user charges to Myanmar. And in return for writing off the debts, partly or wholly, China will take over Kyaukpyu, which will soon turn into a Chinese colony anyway. This is the Chinese form of colonialism,” said a China expert with a prominent Delhi-based think-tank who did not want to be named.

Coming to Nepal, the proposed Kathmandu-Gyoring rail link will be unviable due to many factors. First, the project cost is too high and the loans that Nepal will be taking from China to finance the project will be just too expensive. The existing highway from Kathmandu to Rasuwa (the land port opposite Gyoring on Nepal’s side) remains blocked for days at a stretch due to frequent landslides. The soil in the eastern Himalayas, which is a young mountain range, is unstable. A railway line, thus, has to cut through tunnels and span the mountains through long bridges if it is to be an all-weather line immune from the routine vagaries of nature; and this is why the project cost will be very high.

Second, if goods are to be transported from China through Tibet all the way to Nepal, they will be far too expensive compared to the ones going in from India through Nepal’s southern border. China will not engage in any charity with Nepal and, instead, will add the high transport costs to all goods that go into Nepal on freight trains through the proposed rail link. Dilip Nepal, an economist based in Kathmandu, estimates that a bar of soap coming in to Nepal through China will cost at least 2.5 times the same bar of soap transported through India. Only Chinese items will be cheaper and the rail link would thus be a Chinese ploy to dump its cheap goods on Nepal.

Third, Nepal’s annual revenue (2017 figures) was US $5.95 billion and its external debt is already US $5.94 billion. Its Gross Domestic Product (GDP) is US $24.07 billion and its current account balance is a negative US $88 million. A US $4 billion rail line built with high-interest Chinese loans will add to the debt and Nepal will find itself in an inextricable debt trap since the entire project will not be a viable one. There is no way that Nepal can pay off another huge debt. China, as it has done in other countries that have fallen into similar debt traps, will offer loans at still higher rates of interest to Nepal for debt servicing (to repay the interest on existing debts) and thus ensnare Nepal further in its grip. In return, Nepal will have to hand over the railway line and other assets, including large chunks of land at strategic locations, to China in return for wiping off the debts.

Oli, thus, is taking his country down the same disastrous path that Mahinda Rajapaksa had taken his country. But he still has time to pull back; all he has to do is look at the dismal record of Chinese investments in infrastructure and other projects in his neighbourhood and around the world.