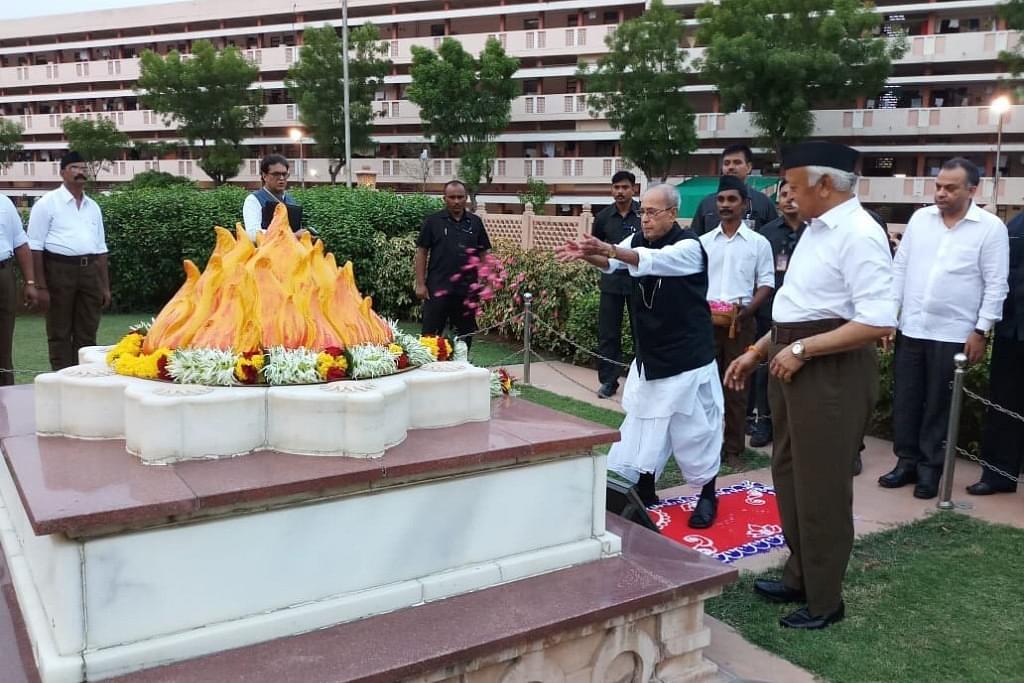 Former president Pranab Mukherjee’s speech at the Sangha Shiksha Varga on 7 June 2018 contains certain contentious issues, the resolution of which will decide the future course of this country in the next few decades. On some such issues, he has firmly sided with the Rashtriya Swayamsewak Sangh’s view. For instance, he firmly rebukes our intellectual friends on the Left who don’t see a nation in India before modern times. On some issues, however, Mukherjee’s views throw a stiff challenge to the Sangh’s ideological moorings. Countering them intellectually should be the major focus for the Sangh and supporters of Hindutva to determine the future of our country’s intellectual and philosophical discourse.

So, the basic question is whether our Constitution and the values enshrined in it are a sound basis for our nationalism. If it is so, then a major component of the Sangh ideology ie cultural nationalism or nationalism based on our civilisational values would lose its significance. Where is the need to be inspired by our ancient roots if all that is needed to feel proud of our nation is found in a recently written book? Why do we need a cultural anchor when around 500 lofty articles of dos and don’ts can define who we are? These are the questions that the Sangh has to confront if Mukherjee’s views on our nationalism are allowed to gain credence.

Firstly, it is difficult to define nationhood on the basis of even the loftiest principles in our Constitution because all of them are shared among many nations that call themselves liberal democracies today. In fact, it is common knowledge that even when it was drafted, our Constitution was inspired by specific provisions of constitutions and political developments in various countries. Much of what is there in our Constitution including its famed Chapter III and principles of positive discrimination, can inspire nationalism in many other countries as India, if they can have that effect. Does Pranab Mukherjee want us to abandon nationalism for some kind of universalism? Then he should say so in as many words so that the debate can move in that direction.

More importantly, the founding fathers of our Constitution themselves attributed only so much significance to their creation. Dr B R Ambedkar, in his last address to the Constituent Assembly, makes it very clear that the goodness of our Constitution does not lie either in its text or in its nature but depends largely on “the part which the people and their parties are likely to play”. Jawaharlal Nehru was very clear that our Constitution “would be only the basis for further work” and not “an end by itself”. In fact, Nehru caused the first amendment to the Constitution, restricting important freedoms, prompting Dr Shyama Prasad Mookerjee to say that it was being treated as a “scrap of paper”.

Any student of constitutional law would acknowledge that much of our Constitution’s significance was gained in later years through judicial interpretation. Such interpretations varied according to the individual ideological inclinations of our judges, the prevailing political atmosphere and various other factors, both benevolent and otherwise. Similar provisions of the Constitution which have great significance for our country’s future have been interpreted differently during different times. This has led to the famous adage that our Constitution is a “living document” which responds to given situations. If the Constitution and its principles have to inspire nationalism, then our nationalism could be as fragile as the dominant socio-political outlook of people interpreting it at any given point in time. Instead, it should be the same values that inspire our nationalism that govern and influence the evolution of our Constitution.

The great American jurist, Ronald Dworkin, said that the constitution has to be read with morality and such morality should fit “the broad story of America’s historical record”. His example is even more telling. He says, “even a judge who believes that abstract justice requires economic equality cannot interpret the equal protection clause as making collective ownership of productive measure, a constitutional requirement because that interpretation simply does not fit American history or practice.”  So while the constitution of any country may lay down several admirable principles, its working and interpretation has to come from a source outside itself, like the history of free enterprise in the American context.

It is also important to note that countries without a written constitution like the United Kingdom have liberal and tolerant societies whereas many countries with constitutions embedding far greater principles than ours have failed to uphold them. If our Constitution has succeeded where others haven’t, then those factors that have led to this success should form the basis of our nationalism. Also, how do we retain affinity and respect to the patriotism of all the great souls who made sacrifices for this country before the emergence of our Constitution? What happens to the nationalism of Swami Vivekananda, Sri Aurobindo and others which was rooted in our spiritualism? Where is Bankim Chandra’s umbilical love in our Constitution? What about the patriotism of Mahatma Gandhi, who saw divinity in his fellow citizens? Can the Constitution alone inspire the sacrifices of our armed brethren at the borders? These are just some of the questions which the Sangh should ask Mukherjee.

One must not discount the attractiveness of the idea of nationalism based on “civic values” to India’s modern youth. As UK’s famous conservative thinker, Sir Roger Scruton, asks in the British context, “years of peace and prosperity, the decline of the Christian faith, mass migration and the spread of global trade and communications – these and other vast changes have produced a generation of young people more attuned to networks that connect them to their peers than to the liberties that their grandparents fought for. They have not been confronted in their lives with the emergency to which patriotism is the only cogent response… So what broad conception of the British settlement and British character can we now rely upon, in exhorting our compatriots to identify with their country as an independent body politic in a place of its own?”

The Sangh’s task is to make Mukherjee’s audience realise that the true spirit of Indian nationalism should rest on a far firmer footing than just the noble principles of our Constitution. It should rest on the same foundation that supports these principles.