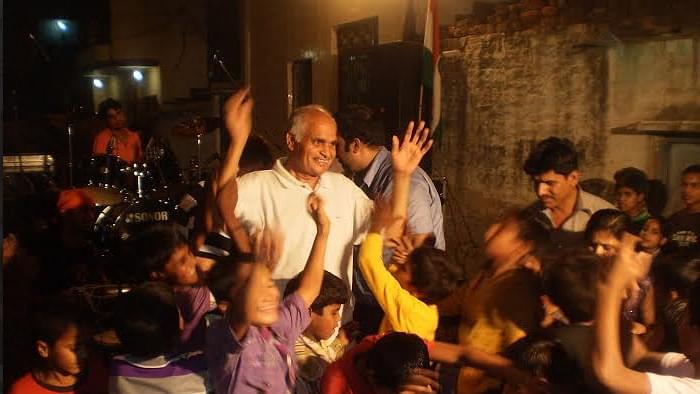 Hindus persecuted in Pakistan and Bangladesh about to find a home in India.

The long-drawn struggles of Omendra Singh Ratnu of Rajasthan and Tajinder Pal Singh Bagga of Delhi are about to draw to a happy close. The Vishwa Hindu Parishad’s Rakesh Ranjan, Santosh Rai, Chandra Prakash et al, and advocate Bhim Singh,who got a stay on the order of deportation of Pakistani Hindu refugees from the Delhi High Court on 21 December 2011, will be happy, too.

But the most relieved of them all will be the few lakh refugees who escaped that hellhole of persecution called Pakistan, using tourist visas with the intention of never returning from India. Swarajya caught up with some of them living in mud and bamboo huts next to Gurudwara Majnu ka Tila (Maharana Pratap Camp), Sector 11 of Rohini and Adarsh Nagar of Jahangirpuri.

Former government employee Chaudhary Nahar Singh, who worked tirelessly to ensure that 940 refugees got some accommodation in Delhi when the UPA government was about to deport them in 2011, sounds satisfied with his work today. When Hindu organisations in this country were yet to put up organised resistance against the senseless attempts of the former administration to deport persecuted people, Singh had offered his own house to shelter hundreds of refugees.

Hari Om Sahu of the VHP, who has been working for the uplift of these refugees by arranging for their employment, food, education of children, and health facilities for all, is happy that the inmates of the camp in Rohini have begun earning decently. This list is not exhaustive; there are many other unsung, heroic volunteers who worked for the cause.

Newspapers reported on 3 June that the NDA government is about to amend the Citizenship Act to change the cutoff date for a migrant-settler to be accepted as an Indian citizen to 31 December 2014. This development was reported in August 2015, too. Fortunately for Sonaram, Sukhnandan, Hanuman, Nehru Lal, etc, whom I spoke to, they had set their feet on Indian soil in the period 2011-13.

In Pakistan, they had no hopes of finding jobs in government, police, military or judiciary; their daughters would sometimes be stalked, molested and raped; their Muslim neighbours in Pakistan and the authorities in that country would suspect them to be Indian agents; whenever India would win a cricket match against Pakistan, the Hindus of Pakistan would face the ire of Muslim marauders of that country. And finally they would be told there was only one way to escape this persecution: Embrace Islam!

Sonaram arrived in India in 2011 with the excuse that he wanted to visit a Hindu shrine in Rajasthan. Sukhnandan had the Kumbh Mela of 2013 as the ruse. In all, 152 families immigrated to Delhi in that period, of which 120 are staying in the Maharana Pratap Camp. Hundreds of others — putting up in ramshackle huts and eking out a living selling fruits and juices or finding some work on daily wages in different cities of the country — had offered scores of other pretexts to the visa authorities to flee the dreadful regimes prevailing in Pakistan and Bangladesh.

Former Home Minister P Chidambaram had tried to deport them back to Pakistan; “He suspected we were here for rioting,” Sonaram says, adding, “Rajnath Singh, who is the Home Minister now, had come to meet us in 2013. He assured us that his party would fight for our permanent settlement in India.”

Volunteer Sahu, who works for 55 refugee families comprising 330 individuals in Adarsh Nagar, informed Swarajya that a VHP-Bajrang Dal delegation met with the current Home Minister towards the end of last year. Rajnath Singh reportedly assured them that the NDA government would change the Citizenship Act of 1955 — rules last amended in 2009 — in due course.

In the meantime, Sahu informs, the inmates of the camp in Rohini toiled so hard and with such dedication that they are now earning between Rs 500 and Rs 1,000 a day from whatever sources of income the volunteers helped them access. The refugees in some other camps, however, continue to struggle to lead respectable lives.

The residents of these makeshift camps tell Swarajya that they used to reproduce as much as they could to get a sense of security in larger numbers. “Each one of our families has 5 to 8 children. While we sought protection in our big families back in Sindh (Pakistan), where we were all farmers, here we are concerned about our children’s education,” a refugee says as I notice some little children in the slum running around naked, some older ones enjoying a swing on a loop of rope hung from a tree, and a girl whose hair is being braided by her mother.

Nahar Singh (61) can’t hide his voice of frustation when he says: “The 1950 agreement between India and Pakistan said the former would take care of its Muslim population while the latter would take care of its Hindu people, but this wasn’t honoured by Pakistan. The Hindus in that country were unnecessarily put through this harassment and humiliation. Pro-Pakistan activists of that era should not have demanded a separate State when they knew they were in no mood to tolerate Hindus in their midst.” He shows a letter written to the President whose content expresses this sentiment.

[Video on the plight of Pakistani Hindus made by Omendra Ratnu]

Electric supply to the Maharana Pratap Camp is scarce. While the inmates make do with the terrible heat during the daytime, darkness after the sunset means that the children cannot do their homework. They hope, once they get Indian citizenship, some area will be identified for their resettlement in better built houses.

Roop Chand offers me sugarcane juice and other inmates of the camp stop me from paying for it to the poor man.

Sukhnandan tells me that each one of the adult inmates makes about Rs 200-300 a day, which is not enough to fend for the family. An inmate of the camp in Rohini, Hanuman, says over the phone that he has some work for the day and, hence, he could meet me not before 5 pm.

Another refugee staying near the gurudwara says none of them earns more than Rs 5,000 a month. They are all looking for loans to the tune of Rs 2 lakh each to set up parchoon ki dukaan (mom-and-pop kind of shops) and live better than what their present daily wages permit them to. But that will be possible only once they turn citizens of this country.

Sukhnandan pleads, “Please write this specially - we pray to all gods may Narendra Modi rule this country as long as he wishes to: 15, 20, 25 saal (years)! He is a great leader. It is for him that we were not thrown back to Pakistan. We now await citizenship status.”

Playing the devil’s advocate, I tell a refugee that the slum dwellers of Delhi in general are worse off; their slums are dirty unlike the clean mud huts here and their rooms are like pigeon holes whereas, inside the shanties here, one could at least stand erect. So, why should the refugees be the government priority when the poor who are already citizens live in more wreteched conditions? “But we don’t do drugs; we don’t indulge in crime unlike many of them,” he retorts, adding, “We will always be law-abiding; we are indebted to India.”

When Sonaram opens his diary to share the phone numbers of Pakistani Hindu refugees putting up in other camps, I notice that the few sentences scribbled in it are all in Nastaliq (the Urdu script); the mobile phone numbers are in Hindu-Arabic numerals. One hopes that they got the good news today from some source other than newspapers, as they cannot read Devanagari and don’t understand English. And there is no television set in the whole camp.

Before we end the report, an editorialised comment will be in order. Granting these refugees Indian citizenship was, in fact, a promise made by the BJP in its Lok Sabha election manifesto. As the report in The Times of India says, the United Nations indeed differentiates between migration caused by persecution and that necessitated by economic reasons (some volunteers like Nahar Singh had approached the UN, too).

Besides, unlike these Hindus, the Muslims who illegally immigrated into this country did not use the visa route; rather, they breached the fences along our western border or exploited lax security along the east. The Muslims of Pakistan and Bangladesh are not told they will experience hell until they convert. Some of the infiltrators come with the specific purpose of doing harm through terror acts. Their cases are not humanitarian by any stretch of imagination. The “liberal” position that asks why India should discriminate between Hindu refugees and Muslim infiltrators is misplaced. Victims of persecution are always treated differently from economic refugees.