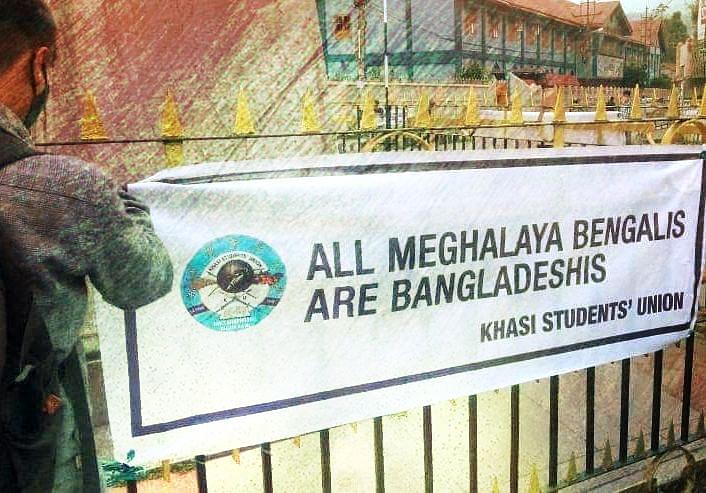 A poster calling non-tribals ‘Bangladeshis’ put up in Meghalaya.

Alok Kumar, a young officer of the Customs and Central Excise department, is battling for his life at a private hospital in Guwahati.

He was brutally attacked in Meghalaya’s capital, Shillong, Thursday (November 24) evening by a mob of young Khasi men protesting against the firing by Assam police that resulted in the deaths of five tribal villagers at Mukroh in West Jaintia Hills district of the state.

Kumar, who hails from Bihar, had nothing to do with the Assam Police. He was in Shillong to attend a two-week training at the National Academy of Customs, Indirect Taxes and Narcotics and was walking back from a popular shopping spot in the city to a guest house he was staying in.

But Kumar was targeted by the Khasi mob only because he was non-tribal. He looked like a non-tribal, and that made him fair game for a vicious attack by the tribal lumpens.

Kumar joins a long list of non-tribals who have had to face assaults, including sexual assaults, and even gruesome deaths just because they were dkhars, a Khasi pejorative for non-tribals.

Just a month ago, many tribal youths participating in a rally brought out by a pressure group to protest rising unemployment in the state viciously attacked non-tribals who happened to be on the rally route.

Such unprovoked attacks on non-tribals are not only quite common, but are the norm in Shillong and many parts of Meghalaya.

Since 1979, when the first attacks on non-tribals started, dkhars have had to face unspeakable brutalities and indignities in Meghalaya, especially Shillong. This has led to a significant exodus of non-tribals from the state.

The hate crimes against dkhars first started in 1979 after some Khasi boys who desecrated a murti of Goddess Durga were reprimanded by non-tribals. The Khasis took it as an unacceptable affront and a widespread violence against dkhars, especially Bengalis, started.

Properties belonging to non-tribals were attacked, looted and torched, and many dkhars were killed. One particularly gruesome incident stands out: eight Bengalis were asked to disembark from a government bus that was on its way to Shillong, taken to a deserted spot and stoned to death in a manner that would surpass all medieval brutalities.

Since then, successive waves of violence against dkhars have claimed many lives (of non-tribals), rendered hundreds homeless, deprived thousands of their livelihoods and forced lakhs of dkhars to leave the state.

In fact, the exodus of dkhars from Meghalaya over the past four decades is nothing but the result of ethnic cleansing by the tribals, especially the Khasis.

And the crimes against non-tribals are nothing but hate crimes, and have to be called out as such.

The non-tribals are fair game for hate crimes since the large mass of tribals in Meghalaya have been led to believe by the state’s politicians that dkhars are solely responsible for all the ills afflicting the state.

The campaign against non-tribals started within a few years of Meghalaya being carved out of Assam and attaining full statehood in 1972. Many tribal politicians started preaching hatred against non-tribals, accusing the latter of cornering jobs and economic opportunities and depriving the poor and backward tribals.

The politicians kept on raising the bogey of non-tribal dominance to hide their own failure in improving the lives of their fellow tribals. As corruption became endemic in the hill state and loot of the public exchequer became the norm, little of the central funds for development projects and social welfare schemes reached the poor tribals. This only made poverty and unemployment more acute.

Politicians thus found the dkhars to be a convenient punching bag. In a devilish tactic darkly reminiscent of Nazi-era Germany, dkhars were blamed for the poverty and backwardness of the state’s indigenous tribals.

However, a disclaimer would be in order here: this hate campaign against dkhars was largely confined to the Khasi and Jaintia Hills; the politicians in the Garo Hills generally steered clear of such evil tactics.

Non-tribals, especially in the Khasi Hills, were portrayed as the hated ‘other’ who were cunning and exploitative (of the tribals). It took little after that for the pent-up anger of the tribal youths to get unleashed in a brutal manner on the hapless dkhars.

Successive waves of violence visited the non-tribals since 1979, forcing lakhs to move out of the state for their own safety and in search of livelihood opportunities denied to them in the hill state.

It is not only the continuing hatred for the ‘exploitative’ and ‘cunning’ dkhar that has caused the unrelenting attacks on non-tribals. A lot of that has happened because of the culture of impunity and immunity (from prosecution and punishment) that has been perpetuated.

None of the tribals who have been responsible for the often gruesome attacks on non-tribals have ever been prosecuted and indicted for their hate crimes. The few arrests that have taken place have been mostly perfunctory and the guilty have been booked under mild and bailable sections, thus allowing them to go scot-free.

None of the rapists, molestors and murderers, none of those responsible for the unspeakable hate crimes against non-tribals, none of those who attacked and injured or maimed the thousands of dkhars or looted and torched properties belonging to non-tribals have ever been prosecuted and indicted for their crimes by any court of law.

This has only emboldened the tribals to carry out more hate crimes against the non-tribals.

Alok Kumar, the young Inspector-rank Customs and Central Excise officer who was undergoing the training in Shillong to get promoted to the rank of Superintendent, won’t be the last non-tribal to face a hate crime in Meghalaya.

There are bound to be many, many more like him whose only fault is that they happen to be dkhars in the tribal state.

Till the hate crimes being perpetuated on non-tribals by the tribals in Meghalaya are called out, condemned and prosecuted, these atrocities will continue with impunity.