Why Reservation Is A Disincentive Rather Than An Incentive 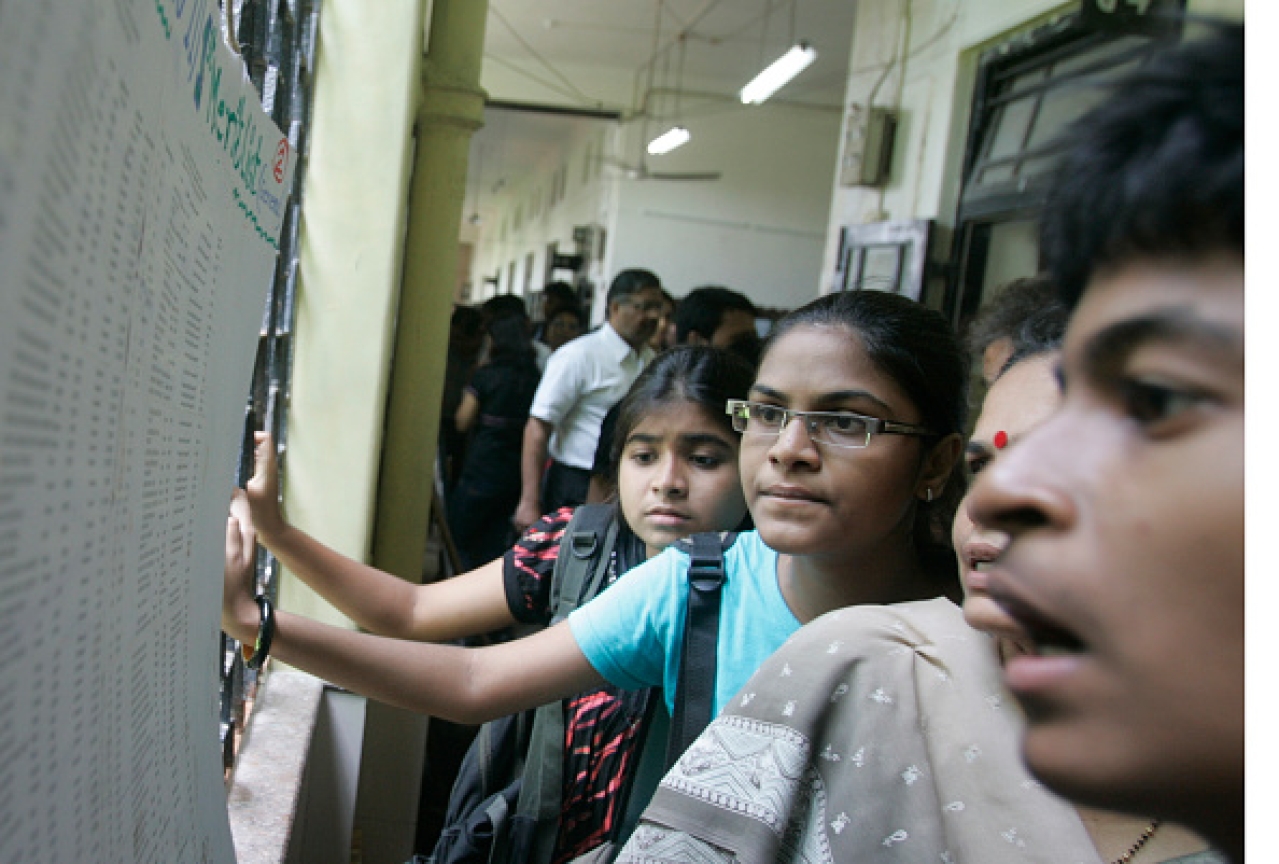 Students scan the merit list put out at their college in Dadar, Mumbai. (Kunal Patil/Hindustan Times via Getty/Images)

Around 67 years ago, our Constitution makers decided to create a nation which fosters the ideals of social justice and equality. It was observed then that a few groups such as the tribes and some specific class groups had been lagging far behind in the prosperity ladder. It was then decided that constitutional safeguards would be provided to these groups (Scheduled Castes and Scheduled Tribes) to ensure they catch up with the rest of the country. Therefore, reservations in educational institutions, government jobs and electoral representation were granted to these groups. Reservations in electoral representation were for a temporary period.

We must note here how the Constitution makers have specifically mentioned the word “temporary”, as those visionaries knew of the problems that could arise if we neglected merit for a long period in the name of equality.

After about three decades, instead of re-examining this temporary measure, the V P Singh government in 1990 decided to provide additional groups reservation based on the Mandal Commission report. A new category called ‘Other Backward Classes’ was created based on a highly debated methodology and awarded reservation.

From then on, there has been no turning back. Anyone even wanting a rational discussion on this subject was branded a ‘merit monger’ and ‘insensitive’ to the needs of all sections of society. The political class, which has used reservation as an appeasement policy, now fears its removal will hit its vote bank interests in relation to certain communities. This system suffers from problems such as a lack of robust data on castes and research-backed reservation, absence of a proper, timely and rational review mechanism. This system fails to recognise that reservation, in fact, divides society rather than the other way around. This has been discussed by many scholars in the past. However, I argue here why this system is structurally flawed as a policy and has the capacity to stall India’s progress.

Let us look at a simple example of how incentives work: If a school teacher wants her class students to perform better, she incentivises the process, declaring a small reward, such as a cookie, for those securing a certain grade. This acts as a motivating factor for the kids and encourages them to work harder and achieve better grades.

Similarly, in many parts of the world where fiscal devolution of funds is practised, from the federal or union government to the state governments, performance is used as one of the criteria to devolve funds. The reason is simple: If a state is told that it will receive more funds based on improvement in performance rather than just where they stand currently, there is a higher motivation to perform better. Just imagine a scenario where the school teacher in the previous example says every child in the class will get a cookie irrespective of whether they perform well or not – the motivation levels of students to perform better will certainly be lower because they are guaranteed a reward in any case. The same can be extended to the fiscal devolution example.

This is exactly what is happening with our reservation system. There is little incentive for the groups which are currently enjoying reservation to develop faster and climb up the ladder of prosperity (at least not claim that they are not backward).

It is interesting to note that this, in fact, is creating an incentive in the opposite direction (disincentive). Over the years new groups have only been added into the reservation list rather than removed after reaching a particular stage of development.

Even today, more number of caste groups and communities countrywide run to the government by the day, seeking reservation, claiming to be backward. The Jats in Haryana, the Patels in Gujarat and Marathas in Maharashtra are recent examples.

It is appalling how suddenly after 70 years of independence, communities realise they are backward and explore ways to prove the same, racing to the bottom of the ladder to enjoy the benefits of reservation.

At this juncture, one cannot but revisit the golden words from the 1983 Rane Commission report in Gujarat. “We have found that some of the castes, just for the sake of being considered as socially and educationally backward, have degraded themselves to such an extent that they had no hesitation in attributing different types of vices to and associating other factors indicative of backwardness of their castes”.

Also, this system, apart from creating a demand-side disincentive for the groups to climb the development ladder, has a supply-side effect too. While the caste and community groups demand reservation, the government and the political class form the supply side. The political class is, in fact, incentivised to keep the groups under the reservation net and even consider adding other groups from time to time in return for electoral gains. Given the deep interlink between the reservation system and the vote bank in our country, there is very less incentive for any political party to even moot the idea of a systematic impact analysis and remove developed groups from the list.

An example of this dates back to June 1965. The government appointed a committee headed by the then law secretary B N Lokur to review the list of Scheduled Castes and Tribes entitled to reservation. The committee concluded that 14 tribes and 28 castes are “relatively forward” and their reservation benefits needed to be phased out. The political class rejected this idea, and the Parliament few years later passed a bill to amend the list of Scheduled Castes and Tribes receiving reservations, without excluding any of these groups.

It is an irony that as a nation in the macro sense we want to move forward and develop rapidly; yet individual groups in micro sense want to move in the opposite direction and climb down the ladder. This paradox is bound to cause friction to development.

This not only impedes development but also impacts efficiency in society to a large extent. As we saw in the school example, students are invariably motivated to put in more effort when they are provided with an incentive. In this case, it is most likely that students work at a higher efficiency while studying, thereby the quality of the whole class increases. It is noteworthy that many companies around the world follow the practice of ‘variable pay’, which is part of the salary that depends on performance, to ensure that a competitive environment is created and employees work at full efficiency. While a lack of incentives in the private sector may affect the employee and their company alone, it has larger ramifications in the public sector. The public sector runs the country, decides the allocation of resources, provides basic necessities for human existence and masterminds nation-building.

It should be noted that the system’s entry-level benefits for reserved categories were later extended to promotions in service also. This means that in these groups, excepting those with individual passion and motivation, others have very little incentive to perform and excel at every stage, from entry into educational institutes to getting jobs and even promotions thereafter.

Therefore, shouldn’t the pivotal public sector create a competitive and challenging environment at entry as well as promotion stages, where only the best of performers move up? If we as a society disregard efficiency at every stage of work, will we move in the right direction and at the right speed? Will we be able to generate capable officials, executives and professionals who run our institutions of public importance? These are questions which we need to ask ourselves.

If we go in for reservation on communal and caste basis, we swamp the bright and able people and remain second-rate or third-rate. I am grieved to learn how far this business of reservations has gone based on communal considerations. It has amazed me to learn that even promotions are based sometimes on communal or caste considerations. This way lies not only folly but disaster. Let us help the backward groups by all means, but never at the cost of efficiency.

Yes, certain groups such as Adivasis, tribes and certain backward communities who have been discriminated and kept out of the development cycle need to be given a boost. However, it should be a well-defined and structured policy where a specific period is agreed upon and fixed. For instance, if a person has become an Indian Administrative Service officer through reservation or a family has got three or four generations of reservation benefits, their future generations must be removed from the reservation cycle. If this does not happen and the family still claims to be backward, either this model is failing or they are hiding behind the veil of reservation and only claiming to be backward.

Also, what happens when we as a society fail to relegate such a race-to-the-bottom model is that we systematically create a disincentivising force among these groups and create less efficient people, leading to less efficient institutions.

We must ask ourselves why something which started out as a benefit for Scheduled Castes and Tribes has been extended to so many other castes and communities over the years. More and more requests are now pouring in by the day. Every other community wants to climb down the ladder, show they are backward and get reservation.

At this critical stage of Indian history, when we are enjoying a favourable demographic dividend – 65 per cent of the population is below the age of 35, it is imperative that we rework this intrinsically disincentivising strategy to move forward. When else can it be a more opportune time to rethink the structure of the caste-based reservation in India when Prime Minister Narendra Modi is calling for a “New India”?

Athreya Mukunthan was a LAMP Fellow 2016-17 and is currently the Head of Research at the office of Lok Sabha MP, R.K.Jena. An economist by training he co-authored the “Public Affairs Index – Governance in the states of India” (2016) while at the Public Affairs Centre, Bangalore. He has also worked on few short term projects with the Confederation of Indian Industry (South) and Tamil Nadu Planning Commission and is a vivid blogger (https://ecoreya.wordpress.com/). His other interests include cricket, yoga, music and Indian philosophy.