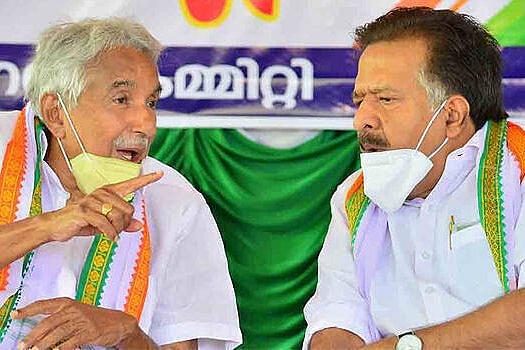 Congress party is facing an existential crisis in one of its last strongholds. Two years after sweeping Kerala in the 2019 Lok Sabha elections, the Congress-led United Democratic Front (UDF) is facing an ignominious defeat.

Kerala politics has been dominated by two fronts — the Left Democratic Front (LDF) led by the Communist Party of India-Marxist (CPI-M) and the UDF led by Congress, spanning 40 years. The two fronts have alternated governments between them like clockwork since the 1982 assembly election.

With the 2021 elections round the corner, history dictates that UDF will wrest power and the ruling LDF government led by Pinarayi Vijayan will be voted out. Expectations should be sky high within the UDF, yet there is an unspoken unease.

There are problems within the major constituents of the UDF — the Muslim League and the Kerala Congress’s Joseph faction. But the elephant in the room is undoubtedly the Congress’s existential crisis in the state.

Factional feuds, organisational deficiencies, a diminishing electoral base, lack of clear leadership and faulty narratives are the problems that the grand old party faces in Kerala.

It is almost unbelievable to think that just two years back in the 2019 general elections, the UDF swept the state and won 19 out of the 20 Lok Sabha seats.

However, that result now looks like an aberration brought about by two reasons: the majority consolidation against the LDF for their position on the Sabarimala issue and the anti-Hindutva consolidation by minorities against the Bharatiya Janata Party (BJP), boosted by the presence of Rahul Gandhi’s high-profile candidature from Wayanad.

The electorate had dealt the LDF a shocking blow. Assembly constituency-wise, the LDF was able to secure a majority of the votes in only 16 constituencies.

Yet, the 2020 local body polls held a little over a year later saw a huge reversal of fortune, with the LDF bagging the majority of gram, block and district panchayats and corporations.

Aggregating results constituency-wise, the LDF won the majority of the vote in 101 constituencies and UDF in 38. While this form of aggregation is an imperfect metric, it still signals that the LDF has significant momentum.

The 2019 decimation of the Left was a temporary setback. Moreover, the ruling coalition was able to overcome the allegations surrounding corruption and the alleged links to gold smuggling.

There are multiple explainers for the extraordinary role reversal between the two fronts, but the focus here is on the Congress, which suffered substantial organisational failures and problems with candidate selection in the local body polls.

However, the most overwhelming change has been the desertion of the Congress by a section of the Christian community, which was motivated by the fears of disproportionate influence of Muslim League, opposition by Muslims to reservation for economically weaker section (EWS), fears of forced conversions (love jihad) and the reaction of the Muslim leaders to the conversion of Hagia Sophia into a mosque.

The UDF has been an alliance of convenience between Hindu, Muslim and Christian elite attempting to counteract the revolutionary spirit of the communists. That has been fracturing bit by bit since 2011, and we may witness a complete break in this assembly election.

What has primarily affected the Congress is that their Nair voter base, especially in Travancore and Cochin regions, is increasingly deserting the party, leaving for the BJP.

The substantial growth of the BJP has primarily come at the cost of the Congress and only marginally at the expense of the communist party. A flood of party workers and local leadership has moved from the Congress to the BJP even in Malabar.

It is this flow, among other factors, that led to the Congress’s loss in the 2016 assembly election. In the Thiruvananthapuram Corporation, the fight is a straight one between the BJP and CPI-M.

Most of the seats where BJP has seen vote share growth have seen a corresponding reduction of votes in the Congress, and only a marginal fall in the vote of the Left.

This loss of their electoral base has been accelerated by the changing stance of various Christian denominations in the state. The growing influence of the Muslim League due to changing demographics is causing friction between the two minority communities.

While ‘love jihad’ has been a perennial issue that the media loves to flag, the concerns over discriminatory minority budgeting (Muslims receive 80 per cent of the benefits of many minority scholarships and schemes as per regulations) and the opposition of Muslims to the EWS reservation now sanctioned at the state level by the LDF government also figure prominently.

This was combined with Jose K Mani, son of K M Mani, joining the LDF after a near 40-year association with the UDF, leading to a substantial section of the Christian community voting for the LDF.

The Christian community in many ways has been more inimical to the communist party, especially the elite, since the famous liberation struggle that brought down the first communist government under E M S Namboothiripad. The situation has now invariably changed.

A majority of the Christian community will still likely stay with the UDF and the Congress: but only a fraction is required for the CPI-M to take it across the line.

The CPI-M has tasted blood and has been on the offensive, calling the League a communal party, highlighting former chief minister Oommen Chandy’s son’s unpleasant comments about churches, and attempting to stitch together a broad social coalition.

Congress: Two Parties In One

P C Chacko, a senior leader of the Congress in Kerala recently resigned over being ignored by the state leadership. While Chacko’s influence is way past its sell-by date, he made a prescient observation:

“Kerala [has] no Congress party as such. There are two parties — Congress (I) and Congress (A). It's a coordination committee of two parties functioning as the Kerala Congress unit.”

The “A” faction and “I” faction of the party have been at each other's throats for over 30 years. Initially, formulated under A K Antony and K Karunakaran, these groups are now led by their proteges, Oommen Chandy and Ramesh Chennithala.

Everything from Lok Sabha seats, organisational positions, to local councillor positions are allocated on the basis of these two groups within the Congress. There have been more than a few instances where the other faction has backstabbed and led to gains for the Left.

Major protests over seat allocation happened yesterday (14 March) when the Mahila Congress state president publicly tonsured her head in front of the party headquarters in a mark of protest against women receiving only nine seats, and her being denied a seat.

The protests by the “A” group in Irikkur in Kannur over their sitting seat being allocated to an “I” group leader is sure to hurt them in the entire Kannur district. Congress has been winning Irikkur for over 30 years.

The organisational lacunae in the Congress cannot be overcome easily, primarily due to the disharmony between the two factions. The pressure exerted by the BJP externally and internally on the two factions mean that Congress is a fractured institution almost completely incapable of exerting itself.

The Congress has most foolishly spun a narrative around Nemom, the only seat that BJP managed to win in the 2016 assembly election.

The BJP’s O Rajagopal had beaten LDF’s V Sivankutty there, while the UDF’s Surendran Pillai won a mere 13,000 votes. The seat has consistently produced a majority in all elections since 2014 for the BJP.

The former BJP state president Kummanam Rajasekharan had hailed Nemom as the ‘Gujarat’ of Kerala. A section of the Congress leadership then set off speculation that senior leader and former chief minister Oommen Chandy ought to contest from the seat.

The narrative being set forth was based on the anti-Hindutva plank of 2019: that the Congress’s national relevance against fighting the BJP ought to be leveraged. The Congress has also attempted to revive the Sabarimala issue in the minds of voters, an enterprise all but dead in their eyes.

By increasing the importance of the Nemom seat disproportionately, Congress created unnecessary attention to its candidate selection there. While there were indications that Chandy would himself contest the seat, he opted for Puthupally, his home constituency.

Thus the Congress was forced to field a heavyweight in the form of K Muraleedharan, who as a sitting Member of Parliament from Vadakara was not supposed to contest these assembly polls as per Congress’s norms.

Can Muraleedharan win there? There are no impossibilities in politics. But the Congress leader’s chance of success is bleak.

Vijayan Thomas, the probable Congress candidate there and in-charge of the constituency, switched to BJP a few days ago. The prospects are quite dim, as one can see from the graphs:

What the end results are is to be seen on 2 May, but Nemom is likely to be an egg on the face of the Congress. But it is likely that they would be too wounded to notice.

The Congress leadership is high on aspirations, without a doubt. Expectations are high, but they will fall flat, in all likelihood.

The collapse of the social coalition that has hosted the Congress would leave space to grow for new political formulations. A possible loss in the 2021 assembly election could be the death knell for the Congress. The two-front politics of Kerala is likely to end in this cycle.

Also read: Why Congress may not come to power in Kerala—ever again