Why The Modi-Mamata Meeting Has Caused Disquiet In Bengal BJP 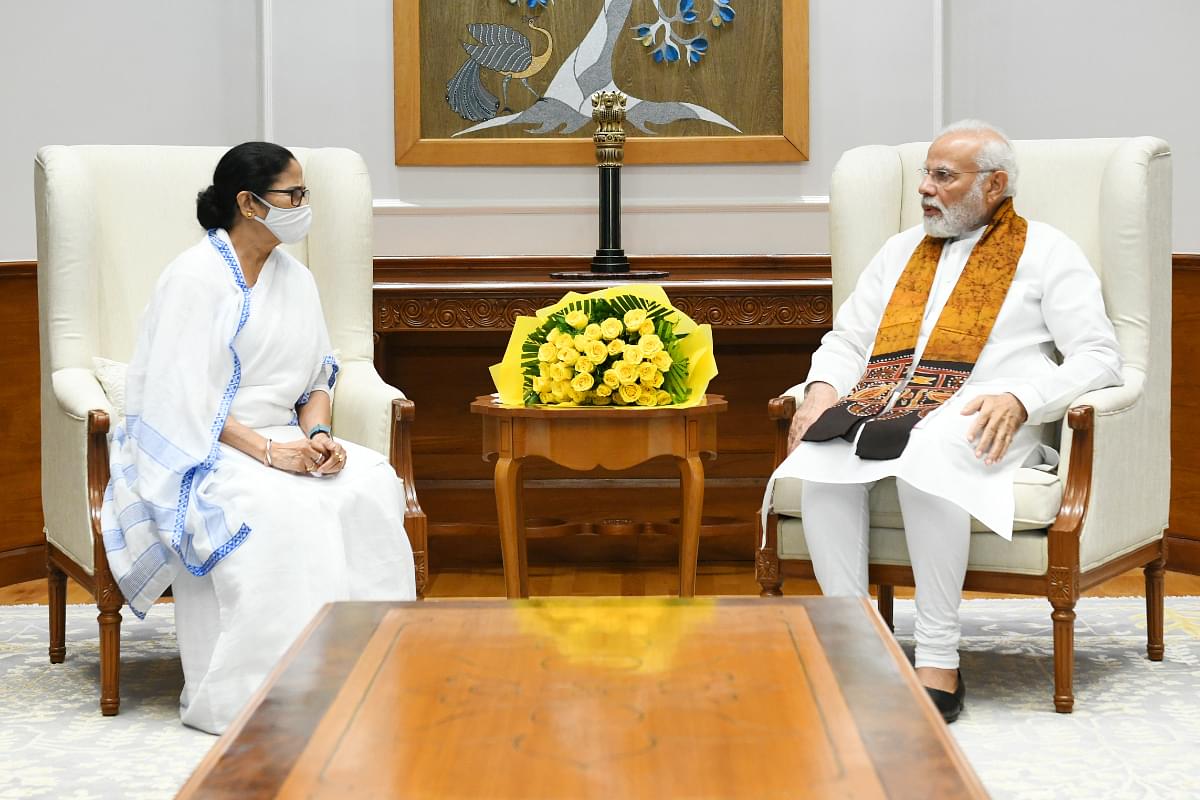 Around the time Prime Minister Narendra Modi was meeting Bengal chief minister Mamata Banerjee in Delhi Friday afternoon, a belligerent legislator of her party was attacking and assaulting a group of BJP workers in Hooghly adjoining Kolkata (watch video embedded in this tweet).

The Trinamool legislator from Chuchura in Hooghly district, Asit Mazumder, was in his vehicle at Khadini More in Hooghly district when he noticed a procession of BJP workers shouting slogans against Mamata Banerjee and her nephew, accusing them of being involved in largescale corruption.

As is evident in the video (also watch this video tweeted by state BJP general secretary Agnimitra Paul), Mazumder walks across the road and confronts a few BJP workers who were inside an e-rickshaw trailing the procession. He then proceeds to abuse them and beat them up, and is joined in the assault by other Trinamool workers and even his security guards.

Mazumder’s shameful act is just the latest one in a long list of abuses, assaults, rapes, murders and much more that BJP workers and functionaries have been routinely subjected to for the past seven years.

The post-poll violence in Bengal where more than 50 BJP karyakartas lost their lives and thousands of families of BJP workers and supporters were driven out of their homes by Trinamool goons is now being investigated by the CBI under directions of the Calcutta High Court.

It is thus amply evident that the Trinamool, including its chairperson Mamata Banerjee, harbours intense animosity towards the BJP. And it is this animosity and intolerance for any opposition that drives Trinamool functionaries to persecute BJP workers and supporters.

It would not be wrong to say that the continuing attacks on BJP workers and supporters happens with the implicit, if not the explicit, sanction of the party’s top leadership. And Mamata Banerjee has always gone to great lengths to provide cover to her cadres by denying the crimes committed by them against BJP functionaries.

The embattled workers, supporters and leaders of the BJP in Bengal have long sought justice and succour from their party central leadership, and expected the latter to bear down hard on Mamata Banerjee for the crimes being committed by her cadres.

But that has not been forthcoming and the manner in which the BJP leadership abandoned party workers and supporters who were facing attacks from Trinamool goons had led to many saffron functionaries resigning or dissociating themselves from the party.

The embattled workers were virtually left to fend for themselves while the leadership issued only statements of condemnation and vowed to fight the Trinamool “politically using Constitutional means” (to quote BJP national president J.P.Nadda)

The demand by state BJP functionaries for intervention from the Union Government is a genuine one and has been voiced repeatedly. The least that the Union Government could have done is to read the riot act to Mamata Banerjee and warn her of dire consequences if attacks on BJP workers and supporters do not stop.

But no such intervention has been forthcoming, leaving many BJP functionaries and leaders of the state unit disappointed. This dismay only increases when they see their top leaders meeting Mamata Banerjee cordially.

And it sows the seeds of suspicion in their minds that a ‘deal’ has been reached between Banerjee and the central BJP leaders.

Such suspicion about an understanding between the top BJP leadership and Mamata Banerjee was triggered after the tripartite meeting in mid-July between Banerjee and her Assam counterpart Himanta Biswa Sarma (who was an emissary of the BJP central leadership) and governor Jagdeep Dhankar.

After that meeting, the Trinamool announced it will not support the opposition’s candidate for the vice-president’s post--Margaret Alva--and will abstain from the polls.

BJP leaders and senior functionaries in Bengal, who were kept in the dark about the tripartite meeting in the Darjeeling Raj Bhawan, were left wondering about the need to strike a ‘deal’ with Mamata Banerjee.

Friday’s meeting between Modi and Banerjee has only strengthened the suspicions about a ‘deal’ between the top leaderships of the two parties.

A BJP MP from Bengal told Swarajya: “It is understandable that a chief minister of a state will call on the Prime Minister and discuss official matters. But the circumstances surrounding Mamata Banerjee’s (ongoing) visit to Delhi is suspicious”.

That’s because, unlike all her past visits, she is not meeting any Opposition leader this time. She had met leaders of many other opposition parties, including the Congress, during her past visits. Those visits were primarily aimed at building opposition unity and strengthening the ‘Third Front’ platform that Banerjee is very keen on.

But this time, her calendar is mysteriously and uncharacteristically devoid of any meeting with any opposition leader. She is meeting no opposition leader during her four-day stay in the national capital and the only political event in her itinerary so far has been her meeting with her own party MPs.

Also, Mamata Banerjee will make a clean break from the past and will attend Sunday’s meeting of the Niti Ayog chaired by the Prime Minister. She has, in the past, never attended any meetings of the successor to the Planning Commission and belittled and abused Niti Ayog.

“Why this change of heart and attitude towards the Niti Ayog? It is very unlikely that she has discovered the utility and importance of Niti Ayog now. Is her attendance of the meeting of the apex planning body a sign of cooperation with the Union Government and part of the deal that has been reached with our central leadership?” wondered another senior BJP leader from Bengal.

Mamata Banerjee, according to Trinamool leaders, met Prime Minister Modi to place before him the demand for clearing the state’s “pending dues” amounting to more than Rupees one lakh crore from the Centre.

She has often abused the Union Government, accusing it of harbouring a step-motherly attitude towards Bengal by denying the state its fair share of central funds. She has often demanded that the dues be cleared forthwith.

“Will the central government meet her demand for releasing such a huge sum of money just because she met the Prime Minister? That’s not how it works,” said the BJP MP.

“Mamata Banerjee claims that nearly Rs 18,000 crore is due from the Union Government for payments under MNREGA, PM Awas Yojana and PM Gram Sadak Yojana. But we all know that there are gross anomalies that have taken place in MNREGA in Bengal and the Union Government will not support the housing and rural roads schemes if the state government passes it off as a state project under the name of Mamata Banerjee,” the MP elaborated.

Mamata Banerjee has also claimed that huge sums of money are due to Bengal for relief works undertaken by the state government after cyclones and natural disasters. But a lot of corruption and misappropriation of funds have been red-flagged in those relief works by auditors and central government agencies and departments. It is very unlikely that the Union Government will release a substantial part of those dues as well.

So, according to BJP leaders and workers in Bengal, the million dollar question is: what was the meeting between Modi and Mamata Banerjee all about? Mamata Banerjee, they contend, did not need to travel to Delhi to meet Modi and plead for release of what she claims are Bengal’s dues.

“The state chief secretary could have met the secretaries of the relevant Union ministries and placed those demands. That is the usual procedure,” the MP said.

“Even if we go by the official version of the meeting that Mamata Banerjee pleaded with Prime Minister Modi to release Bengal’s ‘dues’, what stopped the Prime Minister from telling Banerjee very sternly that attacks on BJP workers and supporters in Bengal will not be tolerated? We understand that propriety and decorum may not have allowed the PM to raise this issue, but such considerations ought to be brushed aside when it comes to dealing with Mamata Banerjee. She has no qualms in overseeing assaults, rapes and murders of BJP workers, so why should our central leaders bother about decorum? Modiji ought to have told Mamata Banerjee very plainly that even a single attack will not be tolerated any longer and she will have to pay a stiff price if this (attacks) go on,” said the BJP functionary.

So intense is the distress and dismay, as well as suspicion (of a ‘deal’) prevailing among not only workers and mid-level functionaries but even senior state leaders that some have come out openly to cast aspersions on the Modi-Mamata meeting.

Two former state presidents have raised questions over the meeting and wondered if a secret deal has been reached between Banerjee and the BJP central leadership.

Former state president Tathagata Roy, who also served as Governor of Tripura and Meghalaya, tweeted Friday: “Kolkata is agog with apprehension of a ‘setting’. Which means a secret understanding between Modiji and Mamata, whereby the thieves of Trinamool and/or the murderers of BJP workers would go scot-free. Please convince us that there wud be no such ‘setting’”. He tagged Modi in his tweet.

Dilip Ghosh, who is now a national vice-president of the BJP, publicly expressed his dismay over the meeting and told the central leadership that they should not entertain Mamata Banerjee. “Mamata Banerjee uses her meetings with Modiji to convey the message that a ‘setting’ (understanding or pact) has been reached with the BJP central leaders. This severely affects the morale of our workers and makes them feel that they have been left in the lurch. Our central leaders who are in government should take note of this and not fall into Mamata’s trap,” said Ghosh.

Many other senior state BJP leaders that Swarajya spoke to privately expressed their dismay over the Modi-Mamata meeting. At the very least, they say, Modi ought to have taken up the issue of attacks on BJP workers forcefully with Mamata Banerjee and the Union Government should have issued a public statement mentioning this after the meeting.

Friday’s meeting has, thus, strengthened the growing suspicion in the minds of BJP functionaries and supporters that an understanding has been reached between the BJP central leadership and Mamata Banerjee. And they feel deeply betrayed by their central leaders.