Reservations: The Inclusionary RSS View Vs The Hate-Driven, Exclusionary View Of The Dravidianists 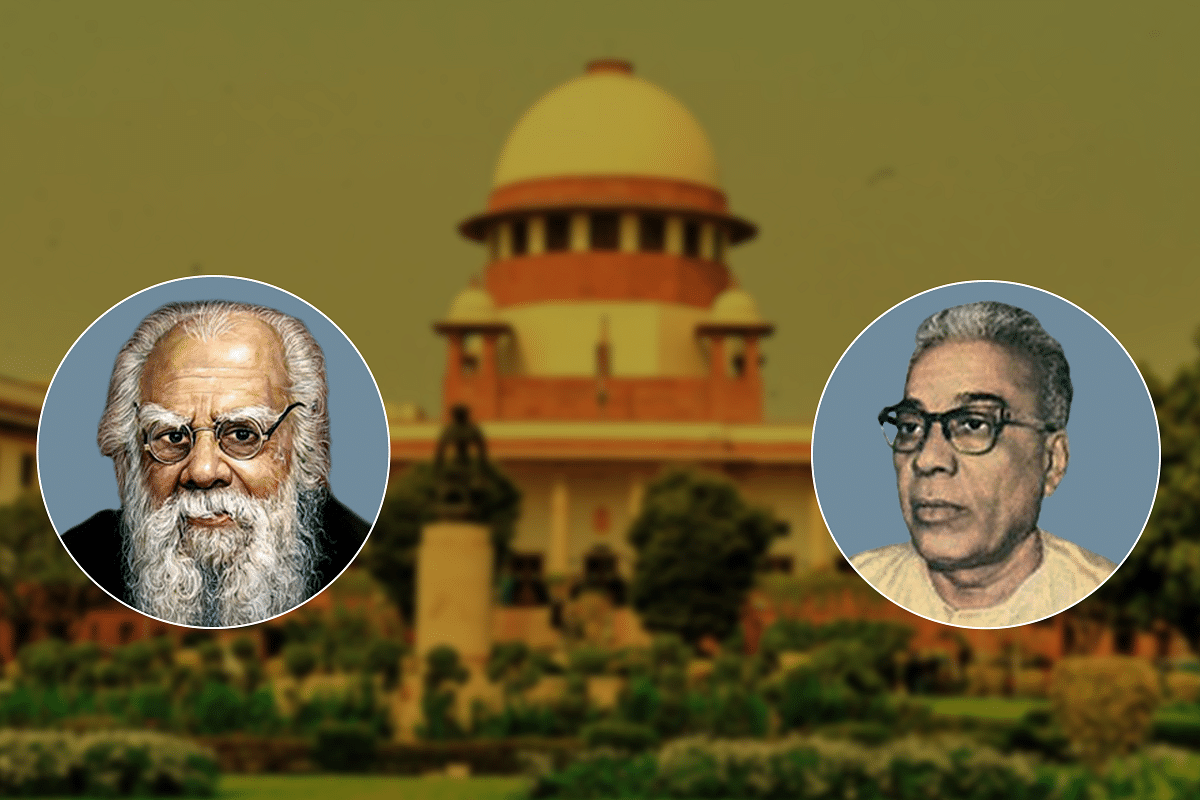 The RSS' support for reservation has at its heart the organisation's concern for Hindu unity.

The opposition to the Supreme Court's judgement upholding quota for the Economically Weaker Sections (EWS) by Dravidianist and other pseudo-Ambedkarite forces is nothing but hate politics.

This has a precedence too.

It is similar to the opposition the so-called upper castes indulged in when the Mandal Commission recommendations were implemented.

In the midst of the hysterical opposition though, there was a voice of reason in the contemporary Indian political landscape. Even though at that time the so-called upper castes were seen as the natural support base of Bharatiya Janata Party (BJP) and cadre base of the Rashtriya Swayamsevak Sangh (RSS), the RSS supported Mandal Commission.

But Madhukar Dattatreya Deoras, the third all-India head of the RSS, explained an important aspect of reservation that many, particularly its opponents, have missed.

The RSS View Of Reservations

Reservation removed the alienation that was felt by many non-'upper-caste' communities with respect to India's modern, national institutions.

Most such communities felt that the civil services and central agencies were the domain of the 'upper castes'.

Deoras believed that such an alienation would result in a death blow to national institutions of the Indian state.

That would make anti-Indian forces co-opt many communities into their project of 'breaking India'.

When political observers and English-speaking intellectuals were seeing a dichotomy between Mandal and kamandal (reservation for OBCs and Ram Janmabhoomi movement) Balasaheb Deoras was convinced that this would help Hindu consolidation in the long run.

The vision and values of Narendra Modi come from the same universe as that of Madhukar Dattatrerya Deoras. And that is Hindutva.

At the basis of this is a deeper and holistic understanding of Dr Bhimrao Ambedkar.

The Ambedkar View Of Reservations

Dr Ambedkar saw the problem of majority-minority categories from a purely secular point of view.

In secular framework, minorities are the socially deprived and marginalised ones — in political, economic and cultural power structures. He stressed that the very perpetuation of such minorities is not healthy.

Hence, the minorities should be protected and they should be given extra instruments for integration with the majority.

Here, Dr Ambedkar provides a coda to see beyond numerical majority-minority and asks us as a nation to homogenise — not losing our individuality but removing the fault lines.

It must recognize the existence of the minorities to start with. It must also be such that it will enable majorities and minorities to merge someday into one. The solution proposed by the Constituent Assembly is to be welcomed because it is a solution which serves this twofold purpose.

One should again remember here that Dr Ambedkar is talking about not religious expansionist forces as minorities but the social minorities.

In fact, the words "minorities are an explosive force which, if it erupts, can blow up the whole fabric of the State" formed the exact argument of Balasaheb Deoras.

From these, one thing should be clear.

The aim of reservation is to enable the existing social minorities to merge with the majority and not create new victim minorities.

But reservations alone cannot do that. Reservation enables the social minorities to gather political and economic power. They are the essential first steps. The final integration is cultural and spiritual.

That is the integration of social minorities through Hindutva. Narendra Modi is one political leader who understands this deep mission of reservations.

Unfortunately, this sacred instrument of Hindu integration that is reservation has been misused by Dravidianist forces. They have used it as an instrument of revenge and hatred against Brahmins, whom they see as the 'other' — like the 'Jew' of the Nazi worldview.

Identity politics and vote-bank politics of the Nehruvian perversion also fed into this. The result has been a reservation programme that has further deepened fault lines between communities rather than harmonising them.

The 10 per cent reservation of EWS is a step in the right direction. It will make reservation again an instrument of social harmony as well as justice.

It will not create another victimised minority but will make it possible for the emotional integration of social minority communities.

The fanatical 'trad-idiotic' anti-reservationists will begin to see the importance of reservation now.

For EVR (E V Ramasamy, Periyar) and all his Dravidianists, reservation is not an instrument of social justice and a mandatory tool for social unity. To them it is the tool of hatred against Brahmins.

But for Dr Ambedkar, Sri Deoras and Prime Minister Modi, reservations are a tool to remove the social fault lines so that social minorities — the creation of discrimination and marginalisation — would be enabled to merge with the larger Hindu society.

So the latter would accept and enable 10 per cent reservation for EWS of the society while the former would oppose it.