Why The Tamil Nadu Unit Of BJP Needs Fresh Blood 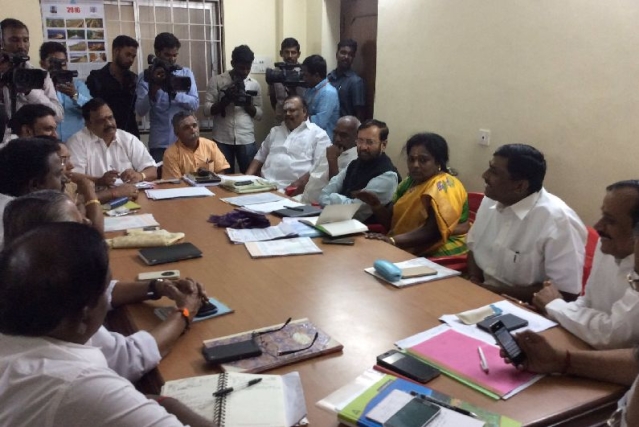 Nearly three weeks after the Lok Sabha election results were announced, the Tamil Nadu unit of Bharatiya Janata Party (BJP) finally met in Chennai to review why the party and its partners in the National Democratic Alliance (NDA) were defeated comprehensively in the state. The findings of the review by the core committee of Tamil Nadu BJP on Thursday (6 June) was nothing but amusing.

In Tamil Nadu, NDA won only one of the 38 Lok Sabha seats. Polls to one seat were cancelled after election commission officials found cash to the tune of Rs 10 crore at the premises of a Dravida Munnetra Kazhagam (DMK) candidate. The BJP, which rode to power in the wake of a pro-Narendra Modi wave, failed to make much impact in Tamil Nadu and Kerala.

A member of the core committee after the three-hour review has blamed the defeat on “anti-BJP groups” and “anti-Modi groups” since the demise of former chief minister and All India Anna DMK Supremo J Jayalalithaa in December 2016. Most core committee leaders, going by The Times of India report, agreed that DMK’s anti-Modi campaign had undone their alliance.

The reasoning of the Tamil Nadu BJP core committee for the drubbing isn’t convincing. It is a surprise that Tamil Nadu BJP leaders seem to have realised only now that the party and its alliances have been undone by campaigns against the BJP and Prime Minister Modi.

The reasoning is regrettable. What were these leaders doing when a whole lot of outfits — starting from DMK to non-descript ones like May 17 — were blaming Modi for everything that was happening in Tamil Nadu since 2017?

The Tamil Nadu BJP unit has an information technology (IT) wing. What did it do to counter the anti-Modi campaigns? There are two factors that show the state BJP IT wing in poor light. One, the IT wing never came up with a sustained campaign to take on the DMK and other opposition parties which went all out to attack the BJP and the Modi government.

If there was any response from the IT wing, it was just ad hoc. The wing seemed to have gone for a day-to-day survival than trying to set the record straight or call the bluff of the opposition. Cauvery issue is one example where the IT wing failed badly.

Attacking the Modi government over the delay in setting up the Cauvery Water Management Board in early 2017, the DMK alleged that the BJP-lead government was delaying the board formation in view of the Karnataka elections. The Tamil Nadu BJP and its IT wing should have taken on the DMK and pointed out at its past record?

In December 1970, when the then chief minister M Karunanidhi wrote to prime minister Indira Gandhi requesting her to convey a meeting on Cauvery as water sharing was turning controversial, the late Gandhi wrote back saying she will call for a meeting only after elections in March 1971. Again, during the talks in 1975, the late Karunanidhi gave away 100,000 million cubic (TMC) feet of water from Tamil Nadu’s share.

Tamil Nadu BJP leaders failed to point out how the DMK had let down Tamil Nadu repeatedly on the Cauvery issue. Again, they could have asked what the DMK was doing after the Supreme Court ordered the setting up of the board in March 2013.

Currently, Tamil Nadu needs Cauvery water and the Cauvery Water Management Board has asked Karnataka to release 9 TMC feet water. The BJP leaders in the state could have used this opportunity to pin the DMK and its president M K Stalin, asking him why he has not taken up the issue with the Janata Dal (Secular)-Congress government in Karnataka. Congress is an alliance partner of the DMK in Tamil Nadu.

Even on the controversy over draft National Educational Policy, the BJP could have called the DMK’s bluff on its anti-Hindi stance. The draft policy recommends a three-language formula, which the DMK and other parties have twisted it to allege that it was one way of how the Centre was trying to impose Hindi in the state.

Tamil Nadu BJP put up a weak defence, saying it was only a draft and nothing has been finalised. Why didn’t the party leaders take on the DMK the way some of the Modi supporters did on the social media?

The Tamil Nadu BJP leadership could have pointed out at how DMK has in the past tried to take advantage of the Hindi knowledge of its first family to get nomination to Parliament or Cabinet. Or it could have showed how schools run by DMK leaders and their relatives teach Hindi compulsorily.

Second, the state unit failed to formulate any strategy on tackling key issues or the campaign against the party or Modi. For example, in the 1990s and early 2000, the party state chief would first find out what the main issue is that could affect the party. Then the chief would discuss the issue with other leaders and chalk out a strategy to counter it. The media cell would then be told how to counter the issue with a uniform voice.

The BJP was not a force to reckon with at that time. But this strategy still paid off. As the BJP tries to gain a better foothold in Tamil Nadu, many campaigns are being unleashed against it. In these circumstances, shouldn’t the state leadership chalk out a well-defined strategy to face the situation?

There are a few questions that the party’s state leadership need to answer. The core committee blames “anti-BJP campaign” and “anti-Modi campaign”. Fine, but what were the leaders doing since January 2017, when protests broke out demanding that jallikattu (bull fight) be held in Tamil Nadu?

Even on this issue, the BJP Tamil Nadu leaders failed to explain to the people how the issue had been complicated by the United Progressive Alliance (UPA) government in which the DMK was an active member. They also failed to highlight how Modi and his team came up with an amendment to the state legislation to help conduct jallikattu.

During the campaign for the Lok Sabha polls, all the five candidates that BJP put up in Tamil Nadu never failed to mention how the Modi government had come up with schemes for providing toilets, houses and cooking gas connections. In addition, they also pointed out at how Tamil Nadu was the major beneficiary of the Mudra scheme, which provides loans to small and medium enterprises. The BJP leaders in the state could have highlighted these from 2017 itself when the party gained big on these in Uttar Pradesh assembly elections.

One of the reasons for BJP’s defeat was how the minorities consolidated behind the DMK and its allies in Tamil Nadu. The minorities were led towards DMK alliance by some of its leaders, who have vested interests.

These religious leaders are opposed to the Modi government since their access to foreign funds have been checked by strict implementation of the Foreign Contribution (Regulation) Act. The regulation requires all organisations receiving funds from abroad to properly account for every dollar they get. Tamil Nadu BJP leaders could have explained these issues to the minorities and dispelled their misgivings towards the party.

There are other issues like tapping of hydrocarbons in the Cauvery basin, national eligibility entrance exams for medical seats, relief for Gaja cyclone victims, goods and services tax, Sterlite copper plant closure and demonetisation. These issues were not faced or tackled by them in the way they should have been? In the end, the BJP and Modi were forced to carry the cross of the sins of previous governments.

The Tamil Nadu BJP leadership gave a free run to the DMK and other parties in their campaign against their party and Modi. The free run resulted in the people in the state almost believing that there was some sort of opposition to the BJP government at the Centre all across the country.

The mainstream media in the state was allowed to get away with its anti-BJP and anti-Modi campaigns with the state leadership just refusing to counter them. At least, half a dozen television channels with a good viewership and a major part of the print media were seen as anti-BJP and anti-Modi. The state leadership should have made efforts to reach out to these and win them over. The Tamil Nadu BJP leadership kept quiet, probably waiting to ride piggy-back on regional parties like the AIADMK in the elections.

Otherwise, what prevented the state leadership from trumpeting the achievements of its government at the Centre, including a corruption-free regime? All this lead to only one conclusion: the BJP leadership in Tamil Nadu needs fresh blood.

The central BJP should utilise the opportunity it gets this November when the term of current leadership ends and appoint leaders who will be courageous, capable, efficient and tactful too.