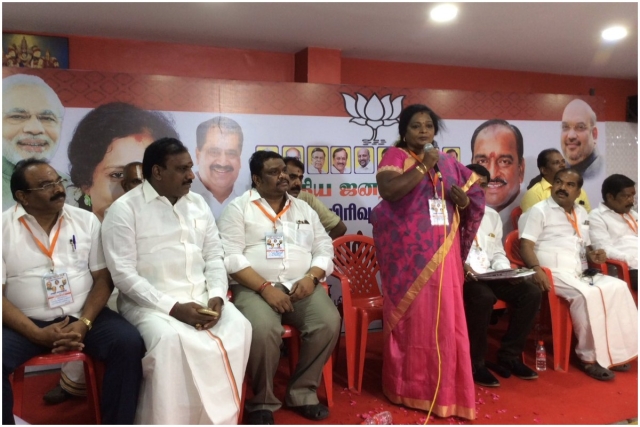 The audio clip is based on a conversation over the phone between Jeevan and a person from Madurai. In the audio, the MLA reportedly asks the Madurai person to arrange for protests against clubbing of seven castes as Devendra Kula Vellalars (DKVs).

The Madurai citizen reportedly tells Jeevan that Pillaimars are Vellalars and they don’t want the other seven communities that figure in Scheduled Castes list to be called Vellalars. The MLA says a solution could perhaps be calling the seven communities as “Devendra Kulathors”.

The background of this complaint is that the DVKs under Puthiya Tamizhagam founder Dr K Krishnaswamy are demanding that the community, who are agriculturists, be removed from the Scheduled Caste list - a first instance in the country where a Scheduled Caste wants to be upgraded to Backward Class.

Prime Minister Narendra Modi, in a public meeting at Madurai in January, said the representations of DKVs is being considered, while the Tamil Nadu Government has set up a committee to look into Krishnasamy’s demand.

If the audio clip is genuine, then the DMK gameplan for the Lok Sabha elections, particularly in Thoothukudi constituency is clear. It is looking to garner the votes of Vellalars that can be around 1.25 lakh.

The stakes are high for the DMK as its senior and women’s wing leader Kanimozhi, daughter of the late M Karunanidhi, is contesting from Thoothukudi. Pit against Kanimozhi is Bharatiya Janata Party (BJP) Tamil Nadu President Tamilisai Soundararajan, who is being backed by the All India Anna DMK (AIADMK), Puthiya Tamizhagam and Pattali Makkal Katchi (PMK).

In the 2016 Assembly elections, the AIADMK won four of the six with the DMK winning Thoothukudi and Tiruchendur constituencies. In Tiruchendur, the seat was won by Anitha K Radhakrishnan, who had switched his loyalty to the DMK from AIADMK.

In 2009, S R Jeyadurai won the Thoothukudi constituency for the DMK, while Jayasingh Thiyagaraj Natterjee wrested the seat for the AIADMK in 2014. Last time around, Natterjee won against DMK’s Jeyadurai by a margin of over 1.2 lakh votes in a multi-cornered contest. In 2009, Jeyadurai got the better of AIADMK’s Cynthia Pandian by over 75,000 votes.

Being the daughter of the late Karunanidhi, Kanimozhi could have chosen any constituency but why did she choose Thoothukudi? In fact, the party has gone by her choice rather than offer her any other alternative.

For Kanimozhi, whose Rajya Sabha term is coming to an end soon, a constituency like Central Chennai could have been a safer bet. But for Dayanidhi Maran, who is contesting from Central on DMK ticket, there is no other safe seat.

South Chennai was won by the AIADMK’s J Jayavardhan, son of State fisheries minister D Jayakumar, in 2014 and more importantly, the Bharatiya Janata Party’s L Ganesan ended up third, getting only 50,000 less than the second-finishing DMK.

South Chennai is a constituency that is seen as one comprising elites and thus DMK cannot risk pitting its senior leaders like Kanimozhi there. There could have been other constituencies that the party could have looked at for Kanimozhi, but her party has its own compulsions.

North Chennai could have been another choice but this is comprised mostly of blue-collared workers and lower income groups and a candidate’s fate here can be decided by money power as Amma Makkal Munnetra Kazhagam (AMMK) founder TTV Dinakaran, after being expelled from AIADMK, proved by winning the bypolls to RK Nagar Assembly constituency that is part of North Chennai Lok Sabha seat. The RK Nagar bypoll was necessitated by the death of the late Jayalalithaa.

This has resulted in Kanimozhi looking for a safe seat to make it the Lok Sabha with the objective of becoming a minister in the event of the Congress winning a majority.

There are two major reasons why Kanimozhi and her party have zeroed in on Thoothukudi, though both are fraught with risks. One is that her mother is from the dominant Nadar community in the region and she has found it convenient to display her maternal connections to the constituency.

The irony is that the late Karunanidhi imprisoned a journalist, Kalyanasundaram, for six months for publishing that Kanimozhi is Karunanidhi’s daughter. Defamation cases were also filed against the journalist as the late DMK leader had then hidden Kanimozhi and her mother from the eyes of the public.

This probably has led to comments on social media that Kanimozhi contesting the elections from Thoothukudi is a fight is between “a real Nadar and a fake one”.

The second reason for Kanimozhi and the DMK to consider Thoothukudi is that they think they can gain from the controversy over the Sterlite copper plant. The copper plant was inaugurated during the DMK’s rule in 1996 and it was again during the United Progressive Alliance (UPA) term, in which DMK was an active participant, that the company got permission for its expansion plans.

Last year, when Sterlite launched its expansion plans it ran into problems with a section of the people opposing them, the DMK and other Opposition parties backed the protests, which then got converted into demand for the plant’s closure.

On 22 May last year, the protests turned bloody with some of the protestors turning violent and police resorting to firing to control them. This resulted in the death of 13 persons, while the State Government ordered the plan shut on 29 May. The plant has been shut since, though the management has moved the courts against the closure.

The shutting of the plant has affected the economy in and around Thoothukudi and this will likely play in the mind of the electorates when they head for the ballot. The dilemma for the voters, though, is that while the DMK actively supported the protestors, the AIADMK Government simply shut the plant after the 22 May violence.

Clearly, Kanimozhi and the DMK did their homework and began working assiduously weeks before the elections schedule was announced. This has given a head-start for her and the party over the BJP and its candidate Tamilisai Soundararajan.

Tamilisai’s presence, however, will likely see the Hindu Nadars pitted against the Christian Nadars. If one were to go by the whispers emanating from the constituency, the Nadar businessmen are likely to fully back Tamilisai since they are happy with the implementation of the Goods and Services Tax regime by the Narendra Modi government.

That is one part of the story. Coming back to the audio clip figuring Jeevan, her and DMK’s efforts, then reportedly, are to try and get the Vellalars on their side. The 1.25 lakh-odd Vellalars are likely to back the BJP after the Modi Government reserved 10 per cent seats in educational institutions for the economically backward classes.

Things aren’t, however, going to be easy for both candidates. To her disadvantage, Tamilisai has been late in getting off the blocks and Thoothukudi is not her choice. BJP cadre and Tamilisai feel Tirunelveli would have been a better choice for them.

Another unknown factor that could influence the contest in the constituency is how the new-formed AMMK will fare.

Thevars dominate the Vilathikulam assembly segment of the Thoothukudi constituency, while Nadars make a miniscule of the population. The presence of AMMK could see it cutting votes, probably those that could have come to the AIADMK in the normal course.

Again, Kovilpatti is one where Thevar and Naidu communities make up a good number of the voters. The Marumalarchi DMK leader Vaiko has good influence in the constituency and it is likely that he will sway these communities to benefit DMK and Kanimozhi.

In Srivaikuntam, the AIADMK has received a setback with its prominent leader there, a Christian, refusing to work for the party. He has been expelled and it could have an impact. Tiruchendur is a segment that Anitha Radhakrishnan has made his own and he could add to DMK’s influence.

On the other hand, Subash Pannaiyar, a popular leader and brother of Venkatesh Pannaiyar who was killed in an encounter with police during Jayalalithaa’s rule in 2012, has extended support to the AIADMK in the Lok Sabha elections. Another community leader John Pandian could also help swing some votes in favour of Tamilisai. In addition, the AIADMK and BJP roping in the PMK in the National Democratic Alliance will add value.

It’s to be seen how the Modi government’s performance or the air strikes on Jaish-e-Mohammad base in Balakot will work in the constituency. The performance of the Thoothukudi port, which has begun to host mother vessels thanks to its deepening, could weigh in as a minor factor.

Both candidates enjoy advantages and disadvantages in a fight that is being watched with great interest. While Thoothukudi is by choice for Kanimozhi, it is not so for Tamilisai.

Thoothukudi could probably witness a close battle with the verdict being settled by a few thousand votes.