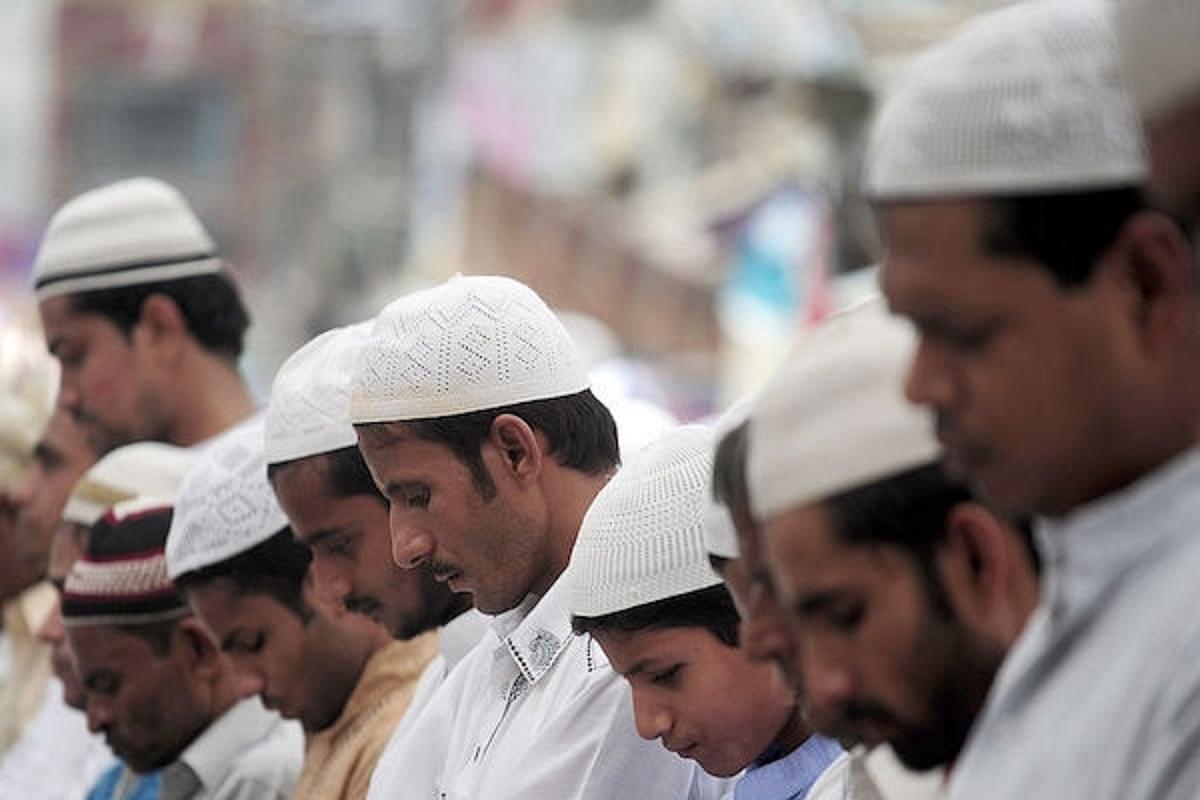 Demographic change is a truth that India's phony liberals refuse to recognise.

It is common for India’s 'Lutyens liberals' to refuse to engage with genuine Hindu concerns. It is easier for them to erect strawman arguments about these concerns and then 'demolish' them as irrelevant and imaginary.

The Hindu concern most often refuted is the undeniable and adverse changes in demography, where the overall Hindu population has fallen decade after decade not only in undivided India, but in post-1947 India too. It fell below 80 per cent in the 2011 census, and the next census will confirm this trend once again. But, the 'liberals' argue, even if this trend continues, Muslims will be nowhere near the Hindu share of the population even by the end of the twentieth century. This is flawed linear thinking, as we will establish later on, but for now let us discuss the opinion of one such liberal.

Swaminathan S Anklesaria Aiyar, who sees himself as a liberal, did precisely this in a Sunday Times of India article (read here, but article is paywalled). He makes three arguments to pooh-pooh Hindu concerns over adverse demographic changes.

First, even assuming the Muslim proportion rises at the same rate that it has since 1951 (a 4.4 per cent rise over six decades), it won’t be more than 20 per cent by 2100 CE. Two, the Hindu-Muslim birth rate differential is falling, with fertility rate gaps falling from 1.1 (additional child) per woman to 0.5 between 1992 and 2015. This means the total fertility rate differential will become zero in two decades. And, three, the difference in levels of poverty (higher among Muslims) explains the current hiatus between Muslim and Hindu fertility rates.

In between, Aiyar also throws in claims that immigration from Pakistan and Bangladesh cannot be causing a demographic surge among Muslims. Then he tosses in a red herring to put Hindus on the defensive. He says that taboos on widow remarriage among Hindus may have restrained Hindu birth rates. But this is unlikely to be true, for if the critical reason for a falling birth rate is non-availability of unmarried (or widowed) women to produce more children, one can say the same about polygamy.

If some men are entitled to four wives, this should reduce the availability of women to the larger population, and hence curtail birth rates. Unless the argument is that polygamous males will make up for the deficit. But wasn’t this the exact argument that was debunked by the same 'liberals' to claim that polygamy is not responsible for high birth rates among the Muslim population in India?

In fact, data about gender ratios at birth show that till the late sixties, India produced 1.05 boys per girl child, which is close to the global average. It is only after our leaders started fretting about population control (hum do, hamare do) and technology made pre-natal sex determination tests widely available that the gender ratios started skewing badly in favour of boys. So, taboos around widow remarriage, which were stronger in the 1950s and 1960s than they are now, can hardly be blamed for this differential fertility rate today.

This brings us to the large issue of loss of Hindu demography. But our faux liberals need to be educated on some basics first.

It is wrong in principle to lump all of India in one bucket to say Hindus have no reason for concern. The partition of India on religious lines is proof that whenever Hindu demography deteriorates in any region, it impacts Hindu rights and prompts Hindu migration away from that region.

We have seen this happening not only in Pakistan and Bangladesh, but also inside India itself, in Kashmir, and this may be quietly happening in other districts which have seen increases in Muslim populations. These include districts in north Kerala, Assam, West Bengal and parts of Bihar and Uttar Pradesh, among others. Hindu concerns are valid if demography is adversely affected in any state or district of India. One cannot use data for the whole of India to invalidate Hindu concerns.

Secondly, demography is impacted not only by differential fertility rates but immigration, too. Aiyar makes the point that out-migration is higher among Muslims than Hindus, with 27 per cent of total out-migration compared to 45 per cent for Hindus (who form 79.8 per cent of the population). On the other hand, he estimates that inflows from Bangladesh are barely 3.2 million so far, against 1.1 million from Pakistan. So, net-net, Muslims are migrating out more than in.

This is a dubious claim and goes against the available evidence. Out-migration can be of two types: those who leave India for good, and those who leave India for jobs. Most of the Muslim out-migrants are likely to be those who found lucrative jobs in the Muslim parts of the Gulf, and not permanent emigres. In the wake of the Covid economic collapse, many Malayalees have been returning to India from the Gulf.

As for the claim that only 3.2 million came to India from Bangladesh, the demographic evidence is to the contrary. If only 3.2 million came from Bangladesh, and even assuming most of them are Hindus fleeing an Islamising society, how does this explain the drastic fall of Hindu numbers from 22.03 per cent of the population in 1951 (the first census of East Pakistan) to just 8.54 per cent now?

Equally, if more Hindus than Muslims migrated out of Bangladesh, there should be a corresponding increase in Hindu proportions in West Bengal and Assam — but nothing of that kind happened. What really happened was, apart from fertility differentials, the proportion of Muslims migrating out of Bangladesh was almost al high as Hindus fleeing persecution. In Assam, the share of Hindu population has fallen from 73.32 per cent in 1951 to 62.04 per cent in 2011, while that of Muslims went up from 24.8 per cent to 34.22 per cent.

In West Bengal, the share of Hindus fell from 79.85 per cent in 1951 to 72.27 per cent, with Muslims accounting for all this decline and making solid gains. Their share rose from 19.46 per cent to 27.01 per cent, and current estimates are that the real numbers could be closer to 30 per cent.

If this is not significant demographic change, what is?

Third, the argument that poverty explains most of the difference in religious fertility rates cannot be true everywhere. In Kerala, where Muslims form 26.56 per cent of the population and are not educationally or economically backward compared to Hindus, it was discovered that 41.45 per cent of live births in 2015 were children born to Muslims. The Hindu birth rate was down to 42 per cent, far lower than their share of Kerala’s population.

This has led some people to surmise that Hindus could fall below 50 per cent over the next one or two censuses in Kerala, since Christians form another 19 per cent of the population. And is this not major demographic change, where a majority becomes a minority within living memory?

Fourth, demography changes not only due to fertility differences and immigration, but also aggressive conversion activities by Muslims and Christians. Aiyar makes the claim that the Christian population of India has stayed at 2.3 per cent between 1951 and 2015, but this is hogwash, and the census figures clearly do not capture ground realities where conversions to Christianity is rising in many states. One can see this is the aggressive church building activities in southern India, especially in Tamil Nadu and Andhra Pradesh, where their actual numbers are being under-reported.

A study by Surendranath C for Swarajya (read the details here) shows that in post-bifurcation Andhra Pradesh, the number of Christians (according to the 2011 census) is just around 6.8 lakh. But memberships claimed by organised churches in the state reveal a Christian population of at least 50-60 lakh, which will be around 12 per cent of the state’s population. If our estimate has erred by a factor of two, the proportions would be 25 per cent, which was the percentage claimed by a YSR Congress MP, Raghu Ramakrishna Raju, in an interview around mid-2020.

What explains this divergence between official census figures and the real figures after accounting for conversions? The assumption is that many Christians declare themselves as Hindus to benefit from reservations for the SC/ST.

Aiyar and India’s phony liberals need to open their eyes to reality and engage with real Hindu concerns over demographic change instead of building strawman arguments and denying the reality.

But one good that has come out of all these strawman arguments is this: there is now an indirect admission that demographic change on some scale is unwelcome. Otherwise, why would they resort to bogus arguments to deny this is happening? Truth dawns on liberals a bit too slowly for our comfort, but truth has an uncomfortable way of bobbing up in front of even those who are unwilling to see it.