Will Tablighi Jamaat Members Not Molest Women Because They Are Religious? Let’s Examine This Question 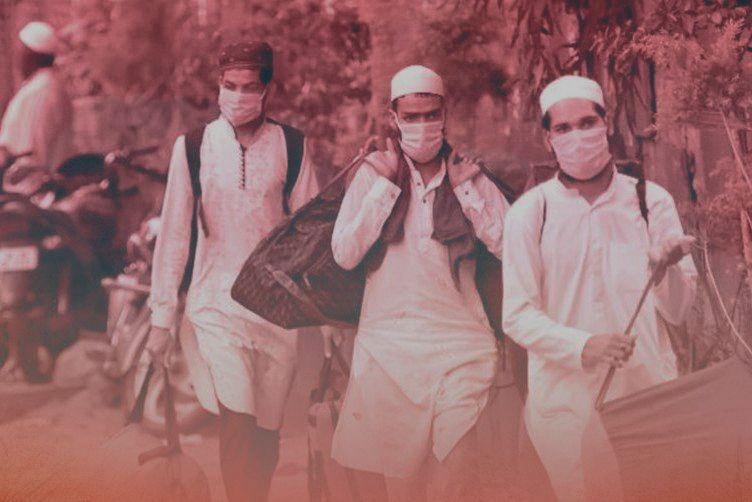 After the healthcare workers in Ghaziabad, Uttar Pradesh, complained to the police that the Tablighi Jamaat patients were harassing them, many came out in support of the Jamaat members.

“...I refuse to believe they would harass doctors or molest women. I know them as selfless individuals who leave... even their families in service of religion... Stop the propaganda NOW,” wrote a journalist.

“...I could never believe that the Jamatis could misbehave with staff nurses. This is pure agenda against a community. They cannot stoop so low. Never!” wrote another journalist.

“...anyone who has spent any time with Tablighis knows that their conservatism extends to extreme propriety around women. Stories about their lewdness ring false...” wrote a Wall Street Journal columnist.

Two years after it rocked the world, the legacy of the #MeToo movement has been made to stand on its head, and tragically, by the very same people who, at the time, came out as its frontier fighters.

Religious conservatism as a defence against charges of molestation may seem ignorant and regressive, given what we know about religious organisations around the world, from Catholic church and paedophilia, to Dargah Bharchundi Sharif and rape of Hindu minors in Pakistan. Many self-styled godmen in India have also been convicted for sexual crimes.

Even so, let’s evaluate whether the religious conservatism of Tablighi Jamaat is a rational ground to predict that the charges of molestation against them are false.

The claim can be evaluated in two parts:

First, for religious conservatism to be a factor, what does the religion itself — as interpreted by the Jamaat — say about women, especially ‘kafir’ women?

Second, since the best predictor of future behaviour is relevant past behaviour, what has been Jamaat’s record?

Tablighi Jamaat is a fundamentalist, supremacist organisation, which promotes Arab-centrism, puritanism, discourages mingling with local culture, especially kafirs, and is in principle, against diversity and pluralism.

Jamaat espouses a millenarian philosophy and works to bring back the Islamic way of life as it was during the lifetime of Muhammad, the prophet of Islam, in the seventh century Arabia.

Members of the Tablighi Jamaat copy Muhammad in all his customs, even giving up beds for sleeping and toothbrushes for cleaning teeth. Music, dance is haraam and completely banned. Novels, cinema, television, fashion, modern education, photography and even newspapers are seen as sources of evil.

It is anybody’s guess what the strict rules imitating the seventh century Arabia mean for women. They have to observe the completest purdah — hijab, niqab and thick black gloves and socks reaching up to the elbows and knees respectively.

Intermixing of the sexes is prohibited, and extremely strict form of female segregation is followed. The Jamaatis also believe in Sharia-based punishment for breaking such rules, like public flogging, and in the worst case, stoning to death.

The feminist scholars who warn us against the overt-covert ways of making women invisible and controlling their sexuality through patriarchal structures would be shocked by this.

But, even more important question is how the revivalist, ultraconservative and literalist interpretations like that of Jamaatis, treat the kafir women.

A Kafir Woman’s Body Has Been Jihadists’ Battleground

Demographic goals have been a part of the Islamic discourse since the very beginning. The Islamic law permitted unlimited numbers of slaves and purchase of female slaves for sex by men ("what your right hands possess").

The Islamic State had published a long justification of its treatment of the Yazidi women — from systematic rape to sex-slavery — saying that it was in compliance with that prescribed for the defeated mushrik (idolators) in the Islamic law.

It provided the following religious justifications: freeing enslaved women from ‘shirk’ (disbelief), bolstering conversions to Islam, punishment of ‘kuffar’ (non-believers), illustrating the supremacy of Islamic State captors, increasing the offspring of the mujahideen (fighters), and as a reward for the mujahideen.

Note that the Tablighi Jamaat movement is unlike Islamic State in that they adopt a strategy of quiet, apolitical grassroots work instead of directly vying for political power.

However, the core ideology barring the strategy and implementation methods is the same, especially from the point of view of the mushrik and kafir.

Indian history itself is a testament to how a kafir woman’s body has been a battleground for the flag-bearers of jihad.

From the time of Muhammad bin Qasim, it was a consistent policy to kill all males, especially those capable of bearing arms, and enslave the women and children. They were forcibly converted to Islam, and those who resisted were tortured and killed.

The enslaved women had two main functions — working as domestic labourers and sex slaves. The preference for non-Muslim women as slaves is also notable in the slave-trade carried out by the Arab Muslims (in contrast to the European slave trade).

During the 1990 Kashmiri Hindu exodus, announcements were made from the mosques for the Hindus to run away from Kashmir if they wanted to save their lives, but leave their women behind.

Some of the common slogans were: “Musalmano jago, Kafiro bhago” (O! Muslims, Arise, O! Kafirs, scoot); “Kashmir banawon Pakistan, Bataw varaie, Batneiw saan” (We will turn Kashmir into Pakistan, and take Kashmiri Pandit women with us, minus their men folk).

In recent times, several incidents raised the question of ideologically-motivated crimes against women deemed kafir and un-Islamic in their ways.

The infamous Muslim grooming gangs in Britain revealed the selective targeting of young non-Muslim girls. A victim, in her testimony, revealed how the perpetrators justified raping them for being kafir.

“They made it clear that because I was a non-Muslim, and not a virgin, and because I didn’t dress 'modestly;’, that they believed I deserved to be 'punished'. They said I had to 'obey' or be beaten.”

The article further states, “these grooming gangs were not like paedophile rings; instead, they operate almost exactly like terrorist networks, with all the same strategies”.

It is also noteworthy that most of the convicted 'grooming gang’ members were married and well-respected within their community, one of them a religious studies teacher at a mosque.

In reality, the theoretical kafir-hatred intermingles with the correlation of purdah with modesty, chastity and safety of a woman against the molesters.

After the wave of migrants hit European nations, there were reports of spike in sexual crimes against women, with 'no-go zones' and 'Shariah zones' cropping up. The young migrants were recorded on camera saying that the women not dressed in burqa, wearing miniskirts etc were seen as "wh*res”.

After the New Year’s Eve mass molestation in Gernany, the European countries, including the most liberal ones like Sweden, had to warn women against potential attacks. Norway instituted an 'anti-rape course' for the migrants to teach them the fact that women must be respected regardless of their clothing.

In Egypt, a spike in the gangrape was correlated with the rise of Islamist political dominance after the 2011 Arab Spring, which saw broadcast of religious preaching blaming the way women dress, walk etc for the crimes.

In many Muslim countries, like Iran, non-compliance with purdah and other ‘modesty’ requirements is punishable by law.

The argument is not that the Tablighi Jamaat is related or responsible for the above-mentioned cases, rather, that the religious conservatism is itself not a guarantee against molestation of women.

To the contrary, history suggests that we should guard against conservative ideologies that justify mistreatment of kafir women, or women dressing and behaving in an ‘un-Islamic’ fashion.

Why Liberals Fail To Protect Women

Despite the strong warning from history, and flourishing ideological Hindu-hatred, the left-liberal section of the media has failed in its responsibility to speak up for these women. On the contrary, when confronted with such inconvenient cases, they actively go about branding the women as liars.

Take the example of a case in Begusarai that Swarajya covered in July 2019. A mother and a daughter, both from the Dalit community, gave a written complaint to the police, alleging that their Muslim neighbours molested them and tore off their clothes after a spat earlier in the day.

The so-called liberal section went about dismissing the women’s allegations — both through coordinated messaging on social media and motivated reports.

There is strong evidence that the radical groups systematically target non-Muslim women, and, in fact, the strongest appeals to the government against ‘love jihad’ and using young non-Muslim women for terrorism have come from Christian groups, the minority commission and the Scheduled Castes commission.

But, the left-liberal section has consistently muzzled the voices of the victims as a 'Hindu nationalist' conspiracy.

Jamaat’s Record Is No Guarantee Against Criminal Acts

The attitude of the Tablighi men on display — that care and caution, advice of the medical practitioner, government directives can all go to hell — stems from the indoctrination that they are superior as doing Allah’s work and will be saved by him.

The scholars and media-persons should desist from communalising the issue by terming it ‘Islamophobia’ or ‘anti-Muslim’, when the fight is against the radical ideologies that preach hate and turn unsuspecting believers into criminals — whether by dehumanising kafir women, or by saying that the coronavirus should be spread as it is sent by Allah to punish the kafirs.

The history of Tablighi Jamaat shows that its members are not averse to criminal activities, be it sponsorship or recruitment for terrorist groups, or Godhra train burning.

In fact, recently, in a video message, Maulana Mahfooz Ur Rahman said that if one digs deeper, he/she will find that the members of the Tablighi Jamaat with 'angel-like' appearance, had been big time criminals.

"...if these people come to their asalaiyat (reality), you will be in a lot of trouble. I want to warn you, I want to tell the media,” he said.

All in all, it is not a fair assumption that the healthcare workers’ complaint against Tablighi Jamaat members is false.