As Yazidis Open Their Largest Temple, A Look At The Persecuted ‘Devil Worshippers’ Having Common Roots With Hindus 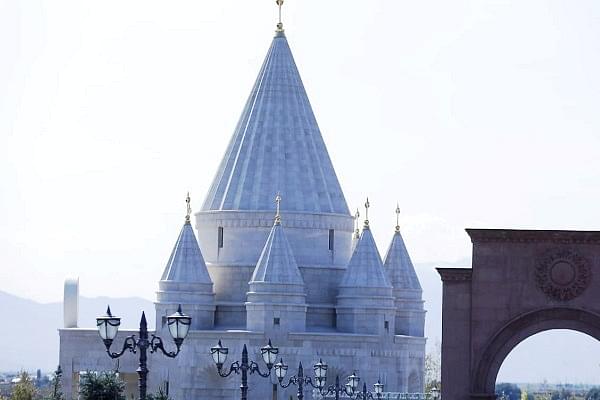 On 30 September, President of Armenia Armen Sarkissian congratulated the Yazidi community over the consecration and inauguration of the world’s largest Yazidi temple Quba Mere Diwane in the Armenian village of Aknalich.

The little-known community of Yazidis made it to international news after their brutal and bloody persecution by the Islamic State in West Asia. As the Islamist terror group gained ground, the Yazidis were forced to flee and hide in the rugged mountains, where they suffered from lack of food and water. Their condition can only be described as that of those having been subjected to a “genocide”.

The captured Yazidi women were raped and kept as sex slaves. They were forced to convert and and then sold as brides. Haleh Esfandiari from the Woodrow Wilson International Center for Scholars called these “temporary marriages”.

“It's based on temporary marriages. Once these fighters have had sex with these young girls, they just pass them on to other fighters," she said.

"These women have been treated like cattle...They have been subjected to physical and sexual violence, including systematic rape and sex slavery. They've been exposed in markets in Mosul and in Raqqa, Syria, carrying price tags," said Nazand Begikhani.

Those who refused to convert were tortured, raped and eventually murdered. Many Yazidi women were driven to suicide to avoid such a fate.

In its online magazine Dabiq, the Islamic State said that the treatment meted out to the Yazidi women was in compliance with that prescribed for the defeated “mushrik” (idolators) in the Islamic law.

An Islamic State pamphlet provided the following religious justifications: freeing enslaved women from ‘shirk’ (disbelief) and bolstering conversions to Islam, punishment of ‘kuffar’ (disbelievers), illustrating the supremacy of Islamic State captors, increasing the offspring of the ‘mujahideen’ (fighters), and as a reward for the 'mujahideen'.

The Yazidis have faced centuries of persecution as they are considered as “devil worshippers" by the Christian and Muslim communities in the region. Several expeditions have been carried out since the Ottoman empire to convert the Yazidis to Sunni Islam.

While designated ethnically as Kurds in Iraq, Yazidis generally believe that Muslim Kurds betrayed Yazidism by converting to Islam, while Yazidis protected and remained faithful to the religion of their ancestors.

The converted Kurds also carried out massacres against the Yazidis, nearly wiping out their population. Therefore, many Yazidis identify themselves as a separate ethno-religious group than Kurds. Iraq's Yazidis rarely intermarry with other Kurds, and they do not accept religious converts.

They are also secretive about their beliefs and ways, possibly due to a long history of persecution. The religious traditions of the Yazidi are also oral, and not written. This has resulted in many outsider accounts of Yazidis that try to fit the group into their own mould.

“That Yazidi religion is based on oral traditions rather than written scripture, that their conception of divinity contains polytheistic elements, and that they have long been maligned as 'devil worshippers,' disqualifies them from being one of Islam’s protected 'People of the Book' minorities," Matthew Barber, a scholar of Islamic thought at the University of Chicago was quoted as saying.

The Yazidis consider themselves a monotheistic faith based on their belief in one God, who created the world and entrusted it into the care of seven Holy Beings, often known as Angels or heft sirr (the Seven Mysteries) who occasionally reincarnate in human form for the benefit of the humanity.

The Yazidis are considered as ‘devil worshippers’ because of their worship of Tawûsê Melek (also known as "Melek Taus"), the “Peacock Angel”.

Other groups most likely equate the Peacock Angel to Satan, the fallen angel from heaven. But this is not how the Yazidis look at it. Yazidis consider the Peacock Angel not as a fallen nor a disgraced angel, but as an emanation of God himself.

However, sources foreign to Yazidism attributed several fake narratives to Melek Taus, trying to prove him as a disgraced angel, which became a justification for the persecution of the community. These narratives were most likely introduced by either the Muslims in the 9th century or by the Christian missionaries in the 20th century.

The Yazidis also believe in reincarnation. Much like the Hindus, the Yazidis believe in the transmigration of souls through different lives, which allows for the progressive purification of the spirit.

They have a reverence for the birds and serpents and worship sacred trees. When they pray they face the sun and their holy men anoint them in between their brows on the forehead.

They have a rich oral tradition of passing down their beliefs. They also believe in a rigid caste system and do not proselytise. The Yazidis also don’t believe in the dichotomy of good versus evil but that both occur together in the world.

In a 2016 article, Subhash Kak had laid out the similarities and common cultural roots of the Yazidis and present-day Hindus, including the ancient Lalish temple In Iraq.

Based not only on the cultural congruence but also on the experience of centuries of persecution as ‘devil-worshippers’ and ‘idolators’, the members and leaders of the Kurdish-speaking Yezidi diaspora around the world are in dialogue with members of the Indian diaspora to discover possibilities of cooperation.