Will The Mumbai-Karnataka Region Propel BJP To Power In The State? 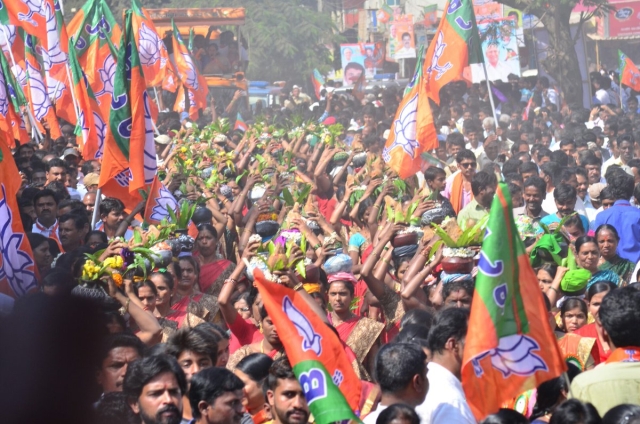 Participants at a BJP rally in North Karnataka

A key region for the BJP

The three districts of Dharwad, Gadag and Haveri are key to the Bharatiya Janata Party’s chances of forming the government in Karnataka in 2018. In 2008, the Bharatiya Janata Party (BJP) had won 16 out of the 18 seats covered. In the 2009 general elections, the party had led in 17 of the 18 assembly constituencies. The 2013 elections saw a downturn in fortunes for the BJP with the party managing only 4 seats. This was primarily caused by the BJP-Karnataka Janata Paksha (KJP)-Badavara Shramikara Raitara Congress Party (BSRCP) split which confused the electorate in general and the Lingayat community in particular, which ultimately led to the Congress benefitting electorally. However, a reunified BJP was back with a bang in 2014 as the party again led in 16 out of the 18 seats.

Why is the BJP strong here?

The strength of the BJP in this region is the demography of these areas, dominated by the Lingayat community that has consolidated for the BJP in the past. The BJP is well placed to take advantage of the favourable demography due to a couple of reasons. Firstly, post the collapse of the Janata Dal and the demise of leaders such as S R Bommai, J H Patel and Ramakrishna Hegde, a majority of erstwhile Janata Dal leaders switched to the BJP. This brought stalwart leaders from the dominant Lingayat community into the BJP fold along with their personal popular bases and their organisational machinery.

Secondly, the popularity of BJP leaders such as B S Yeddyurappa, Jagadish Shettar and Prahlad Joshi contributed to the BJP’s dominance here. In addition to these reasons, the foundational work done by the Sangh Parivar in the region, especially after the Idgah Maidan incident, has proved beneficial to the BJP.

The political situation going into the Yatre

The Congress is currently in a strong position by virtue of sweeping this region in 2013. However, as described below, a reunified BJP has every chance to repeat its 2008 performance in the region.

In Dharwad district, while on one hand the Congress has strong leaders like Vinay Kulkarni and Santosh Lad, who have used their wealth to consolidate their hold on their constituencies, on the other it has Member of the Legislative Assembly (MLA) from Kundgol C S Shivalli, a Kuruba, who enjoys the personal support of Chief Minister Siddaramaiah and its MLA from Hubli-Dharwad East, Prasad Abbayya, who has a considerably popular base. There are, however, grouses against all the four Congress MLAs. Lad and Shivalli are not known for their developmental efforts and Kulkarni is seen to have created an atmosphere of fear in his constituency. Abbayya’s interference in the issue of a separate religion tag for Lingayats has caused discontent within his constituency. These grouses give the BJP an opportunity to retake these seats.

In Gadag, where the Congress holds all the four seats, G S Patil from Ron is the only MLA who is perceived to have developed his constituency. Ramakrishna Doddamani from Shirahatti and B R Yavagal, both of whom won by small margins in 2013, are not known for their developmental works. H K Patil has solved some of the issues facing Gadag city, but his work as district in-charge minister has caused significant dissatisfaction. As far as Haveri is concerned, out of the 4 Congress MLAs only Rudrappa Lamani has some amount of popular sentiment in his favour.

The BJP, thus, has a good chance of making these seats count. However, the BJP too faced a few issues before the Yatre re-entered this region. The infighting between M R Patil and S I Chickangoudar in Kundgol, M Pattanshetti and Mahantesh Mamadapur in Badami, between Nehru Olekar and the local party in Haveri, among Shivraj Sajjanar, Suresh Gowda Patil and Virupakshappa Ballari in Byadgi and Basavaraj Bommai and Somanna Bevinmarad in Shiggaon had to be addressed. The party also lacks strong candidates in Gadag, to take on H K Patil, and in Ranebennur owing to G Shivanna's demise.

The BJP’s Parivartana Yatre entered again into the Mumbai-Karnataka region on 19 December after a fairly successful run through the Hyderabad-Karnataka region which has otherwise been a stronghold of the Congress party. While there were ten rallies in Gadag and Haveri to cover all the assembly constituencies, the constituencies in Dharwad were addressed together at the mega rally held at Hubli on 21 December. The response to this leg of the Yatre showed signs of the consolidation of BJP’s core voters, especially the Lingayats. A clear indication of this trend was evident in the early stages of this leg of the Yatre in the constituency of Ron. Represented by the popular Congress MLA G S Patil, the Yatre meeting at this constituency drew huge crowds.

Highlights of this leg of the Yatre

The high point of the Yatre in the region was the mega rally held on 21 December at Hubli, which saw a turnout of around 1 lakh people, the major draw being the participation of the Chief Minister of Uttar Pradesh Yogi Adityanath, and the much-anticipated announcement by B S Yeddyurappa on the Mahadayi issue.

The letter from the Chief Minister of Goa, Manohar Parrikar, on the Mahaday issue, that Yeddyurappa unfurled, evoked a strong positive response from the crowd, as many of them have been adversely affected by it.

However, Yogi Adityanath could claim to be the main draw of that event since it was his name that was being chanted loudly even as he began his speech in Kannada. The mega rally was followed by rallies in Gadag and Haveri, that also saw a considerable turnout with the Mahadayi issue taking centre stage. If attendance at the rallies is anything to go by, then the BJP can be happy about this leg of the Yatre as the rallies at Gadag and Haveri kickstarted with bike rallies of more than 2000 bikes, the venues at Haveri, Byadgi, Hirekerur and Ranebennur saw over 15,000 people each.

Narratives used by the BJP in the region

The narratives used by the BJP in this region were threefold. The first aspect focused on addressing the major issues prevalent in the region. The second narrative was a direct attack on Siddaramaiah and his statements. The third narrative was to highlight the work done by the National Democratic Alliance (NDA) government for the region as well as attacking Siddaramaiah for failing to transfer these benefits to the people.

The rallies generally began with an attack on Siddaramaiah’s Sadhana Samaveshas. The BJP leaders pointed out that Siddaramaiah had taken out his Yatra as he was scared of the success of the BJP’s Parivartane Yatre. They also attacked Siddaramaiah’s recent spree of promises and inaugurations saying that these works were either those started by the erstwhile BJP government or were projects for which no budgetary provisions had been made. Another major attack point was the divisive nature of Congress’ politics with a comparison being drawn with the work done by the erstwhile BJP government for communities such as the Kurubas and the Muslims.

In Hubli and Gadag, the Mahadayi issue dominated. The leaders focused on explaining the efforts of the BJP in the direction like the Rs 100 crore given for the project during the BJP-JD(S) coalition’s tenure, and also attacked the Congress for not convincing Congress legislators in Goa to back Parrikar’s assurance.

Yeddyurappa, who seems to have taken strong offence to Siddaramaiah's statements about him not being a pro-farmer leader and his only achievement being giving torn sarees and broken bicycles to people, countered the attacks highlighting the party's cycle distribution and Bhagyalakshmi schemes.

Throughout this leg of the Yatre, Yeddyurappa also sought to establish his pro-farmer credentials by highlighting measures such as the zero-interest-loans given to farmers and free electricity provided to power pump sets. He constantly reiterated his promise of allocating Rs 1 lakh crore to complete the pending irrigation projects. In Haveri district, there was an extra emphasis on farmer-related issues, with former water resources minister Basavaraj Bommai pulling up the Congress government for its performance in the field of irrigation. The other narrative threads throughout this leg was the enforcing of the message that the Congress was anti-Dalit and that Siddaramaiah was not an ahinda leader. The tallest BJP Dalit leader in the region, Govind Karjol, used the Congress’ treatment of Dr Ambedkar and Babu Jagjivan Ram as an example to drive this message home.

Finally, the party's MPs from Dharwad and Haveri, Prahlad Joshi and Shivakumar Udasi, detailed the funds released by the central government for the development of Karnataka and the region. As a corollary, they attacked the Congress for failing to deliver these benefits to the people of the state. Udasi repeatedly used the example of the funds unused under the Pradhan Mantri Fasal Bima Yojana due to the incompetence of the state government.

Did the Yatre have an impact?

The Yatre seems to have worked for the BJP on a few fronts. The carefully chosen narratives resonated with the electorate. Though there was a backlash later, the initial response to the Mahadayi announcement was positive. Secondly, the few organisational issues that existed seemed to have been ironed out, at least for now. This also addressed the lingering issue of the BJP-KJP-BSRCP divide by presenting a united front to the people. Except for the fracas between M R Patil-S I Chickangoudar and the candidate related issues in Gadag city and Ranebennur, most issues in these areas were resolved during the Yatre. Thirdly, the success of the Yatre has enthused the BJP cadre in the region. Both the unity within the party and the cadre’s enthusiasm were evident in Ranebennur, where despite there being a lack of leadership, the rally drew a massive crowd. Lastly, the huge crowds attending the Yatre is by itself a positive for the BJP.

Like the previous leg of the Parivartane Yatre in Mumbai-Karnataka through the districts of Belgaum, Bijapur and Bagalkot, this leg of the Yatre was a major boost for the party. The Lingayat community seems to have once again found a strong representative in the form of a unified BJP. Further, through targeted messaging, the BJP has also put in efforts to attract the scheduled castes and scheduled tribes votes in the region.

As said before, these three districts are integral to the BJP’s chances in 2018, and the Yatre seems to have laid the foundation for the BJP to repeat its stellar performance of 2008, 2009 and 2014.

But as they say, ‘many a slip between the cup and the lip’. And it is these slips, that the party must avoid in the run up to the elections.