With No Lifeboat In Sight, Congress Continues To Sink 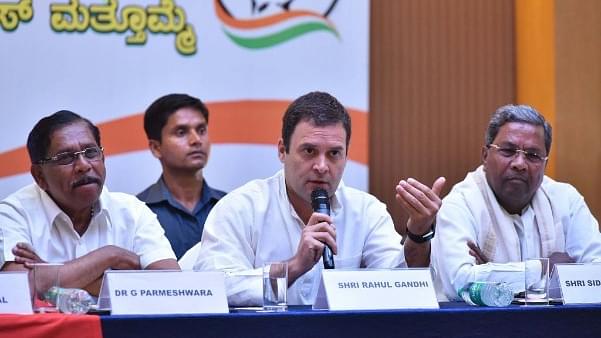 All India Congress Committee president Rahul Gandhi flanked by Karnataka Pradesh Congress Committee president G Parmeshwara (L) and Karnataka Chief Minister Siddaramaiah (R) during a press conference on the last day of campaigning ahead of state assembly election at a city hotel on 10 May 2018 in Bengaluru. (Arijit Sen/Hindustan Times via Getty Images)

They say it’s darkest before the dawn, when night surrenders to the sunlight breaking through to a new day. When the Indian National Congress (INC) suffered an emphatic defeat in 2014, winning only 44 of the 543 seats in Lok Sabha, loyalists hoped that the adage would apply to the party’s predicament. Sadly, for them, this was not the end, but rather the beginning of a downward spiral.

During the next four years, the INC lost 11 states all over the country. Today’s (15 May) emphatic defeat in Karnataka leaves the INC with only two states. When they did win the maximum number of seats, in Goa and Manipur, a lack of foresight and absence of leadership allowed the Bharatiya Janata Party (BJP) to seize the opportunity and create coalitions. In fact, the ignominious fall from grace has dipped to such an extent that the INC now finds itself gloating when the BJP loses a couple of by-elections despite losing deposits themselves in the same contests. This is the hallmark of the archetypal loser who is certain of not winning, but settles instead for deriving pleasure in the misfortune of others.

The cycle of wins and losses has always been part of politics all over the world. The seemingly invincible today will become the perpetually vanquished tomorrow and vice versa. But to change their pattern of constant routs, the defeated must embark on a course correction.

For the INC, this remedial exercise must begin with unconditional apologies for their considerable failures during United Progressive Alliance (UPA) rule. This act of humility should enable them to wipe out unpleasant memories from the minds of the public. They must release their party manifesto that succinctly covers policy and goals while highlighting the shortcomings of the current government. They must circulate the manifesto through all mediums. They must put in place a communication strategy with a set of dos and don’ts for all INC personnel. They must appoint a group of effusive and passionate spokespersons who focus on propagating their manifesto. They must deploy their people on the ground to reach out to every person in the country to understand their problems and propose solutions. The sensitive topic of religion must be avoided at all costs. They must then announce their leadership team with comprising the young and experienced alike. This road to recovery will not be instant or easy; it will require a change in attitude and a great deal of discipline.

Where the Congress stands

On some occasions, the INC and Rahul Gandhi criticise the goods and services tax (GST) while on others, they lambast the demonetisation exercise. Gandhi then incongruously proposes five per cent cess on the richest one per cent of Indians. In some forums, Gandhi blames the Rashtriya Swayamsevak Sangh for all of the current problems and the assassination of Mahatma Gandhi.

On social media, Gandhi has adopted a new Donald Trump-like confrontational style that is dedicated to the mockery of Modi and the BJP. While Trump’s Twitter activities are rooted in his carefully crafted agenda, Gandhi’s approach is clumsy and reactive. Quite like their discourse all over, they are devoid of any forward-thinking solutions and replete with personal attacks, leaving potential voters unsure of what the INC would do if they came to power.

If that is not enough, P Chidambaram’s son is seen jubilantly waving to the crowd while being escorted by police after being arrested for corruption. Kapil Sibal represented the Sunni Waqf Board, who are against the building of a Ram Temple in Ayodhya; he was ordered to discontinue his services. Suspended INC leader Mani Shankar Aiyer continues to be a boon for the BJP as he ceaselessly attacks the Prime Minister during his frequent trips to Pakistan.

To protest ‘cow vigilantes’, Kerala INC personnel indulged in ghastly public slaughter of a calf in public. Sonia Gandhi laments the fact that the INC is regarded as a Muslim party. This only helps remind people that the INC is brazen despite allegations of corruption, looks down upon the common people, and is anti-Hindu even if not necessarily pro-Muslim.

The fault for all this chaos is the absence of inspiring leadership, i.e., a commander-in-chief with a bold and fresh vision who can steer the party in the right direction and who can command respect such that the party is unified and speaking in one voice. Instead, they have Gandhi displaying incoherence, ignorance, and verbal ineptitude when subjected to any sort of scrutiny or questions. When Gandhi isn’t struggling in public forums, he is away on abrupt, unannounced vacations. The frequent lauding and applauding from sycophants in the media (yes, there are some who think Gandhi is the equivalent of Kalidas) and the party irrespective of the ineptitude, is probably a major factor that changes very little within the party despite the routs.

It is obvious that Gandhi needs to be replaced, but therein lies the Catch-22 situation. Gandhi’s ineptness has been rejected by the public, but history has shown us that only a member of the Nehru-Gandhi family can maintain order in the INC. If the first family were to be expelled from the INC, every other Delhi-based leader would lay claim to the throne, and chaos would ensue. We saw this during the Sitaram Kesri and Narasimha Rao phases.

The likelihood that this chaos within the INC will end anytime soon is remote. This is probably why collaborators of the clumsy endeavour called the “third front” seem unsure about including the once-formidable political party, whose future is more uncertain than that of a kite flying through a cyclone.