With ‘Pariksha Pe Charcha’, Modi Gets The Right Conversations Started With Students 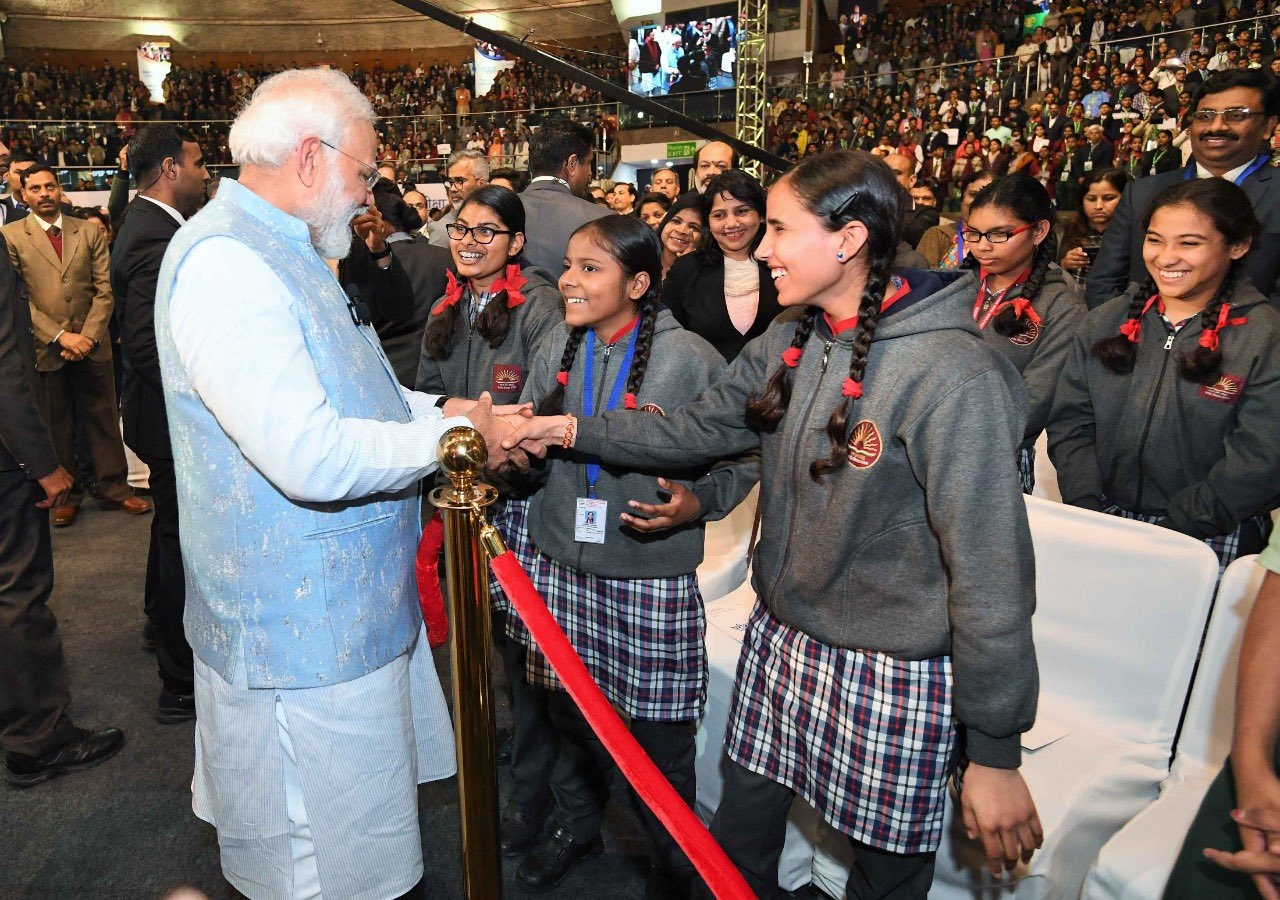 Prime Minister Modi meeting students ahead of the With ‘Pariksha Pe Charcha’ event.

There is a legendary scene in Thevar Magan, a 1992 Tamil movie from the time when Kamal Hassan could still be partly liked.

It’s a succession drama that reminds one of The Godfather in some of its sequences.

Kamal, the foreign-educated son, is having a conversation with his father, played by Sivaji Ganesan. After a few unsavoury events during his brief stay in his native village, a self-centered Kamal wants to distance himself from the village and settle in a city (or abroad).

A powerful conversation ensues. The standout part is when Sivaji Ganesan tells Kamal,

Can you reap the fruits immediately after sowing the seed? You reap the fruits of what I sow. Then it would be your children’s turn to reap and their children’s turn, and so on. It’s the seed I sowed but I won’t be alive to see all this. But it’s not about my greatness, I wasn’t doing anyone a favour. It’s just my responsibility…these same people who you call ‘uncivilised brutes’ put in sweat and toil to educate you abroad, do something for them.

In an increasingly narcissistic public environment that fuels the deification of rights, it is easy for the Insta-generation to put their feelings and rights above everything else.

It may be natural to be self-obsessed when one is regularly involved in choosing which selfie to use and which filter to apply. In such a milieu, turning the direction of the conversation around and speaking of responsibilities is not necessarily a popular thing to do.

To speak about responsibilities to an audience of teenagers is even worse, because, at best, one would expect that they will roll their eyes at the mention of such words.

It is partly not their fault, because, as an urbanising society driven by debasement of public virtue, we have forgotten the art of articulation of simple truths in a way that can convince the “What’s in it for me?” generation.

Canadian public intellectual Jordan Peterson had once said that responsibility is the new counter-culture and he was trying to advise Canadian Conservatives to sell responsibility and become popular with the youth.

This writer is not that optimistic about such prospects generally though, because most things that are intrinsically meaningful can never be sold but can only be transmitted as a socio-cultural meme, when those who indulge in meaningful pursuits set an example.

Most would agree that Prime Minister Narendra Modi, having been a responsible leader, has the necessary credentials to do so. He made an attempt to do it and got an important conversation going.

On 20 January 2019, Modi had his third annual ‘Pariksha Pe Charcha’ interaction with Indian students from across the world.

It had the usual wit and warmth that one would associate with a typical Modi interaction. Since this was about exams, it also had quite a few discussions on sleep, motivation, preparation et cetera, staples during exam season. However, there were a couple of issues that Modi broached which elevated the conversation.

Both the articulation and choice of themes went against the popular grain of ‘my rights, my life, my rules’ mentality and that is why, on closer observation, Modi’s interaction stood out.

First, Modi brought some clarity into the conversation and tore down the artificial wall between rights and responsibilities. It is in the fulfilment of our responsibilities that the rights of others are upheld.

For example, if a teacher fulfils his or her responsibility, then the rights of the students are upheld. Modi went so far as to say, quoting Gandhi, that it is not rights that are fundamental but responsibilities because it is in responsibilities that rights exist.

Second, Modi did not infantilise the students, much unlike the pro-Left media which lionises university goons when convenient and infantilises them when police cracks down on their violence.

He told the students that by the time India reaches the milestone of 100 years of freedom, in 2047, most of them would be in leadership positions in various walks of life.

Third, he gave the students some practical tips to develop a sense of national responsibility. He asked them to buy local as much as possible, not waste electricity, not waste water, never indulge in ticketless travel, follow queue discipline among others. These are seemingly small matters, but multiply them by a scale of a few million, since India’s demography is seeing a youth bulge. They don’t look so small anymore, do they?

Also, look at the psychological grounding that they lay in young minds who have been, not due to their fault, brought up on a sense of entitlement.

The other important matter that Modi spoke of which could have been unpopular with the Insta-generation is slavery to technology (read social networks).

We are standing at the precipice of a cliff called social network driven mental health problems. The harms of dopamine-driven social network addiction are not even properly known and we seem to be oblivious to the fact that we don’t even know how badly the craving for a like or a retweet bruises a young brain.

Anecdotally speaking, it is easy to see people driven to the limits of sanity in their quest to garner attention on social networks.

While Modi said one needs to be proactive in understanding technology and not fear it, he stressed upon the fact that gadgets should complement your pursuits rather than becoming pursuits by themselves, stealing away time.

One hopes that both these strands of conversation – responsibility and conscious gadget use – become more mainstream topics for discussion, debate and research.

After all, if we are betting big on demographic dividend, we must also double down on getting the right conversations started. Else, the violence unleashed by nihilism and narcissism that we saw on the roads in the past one month could become a feature, rather than a bug.