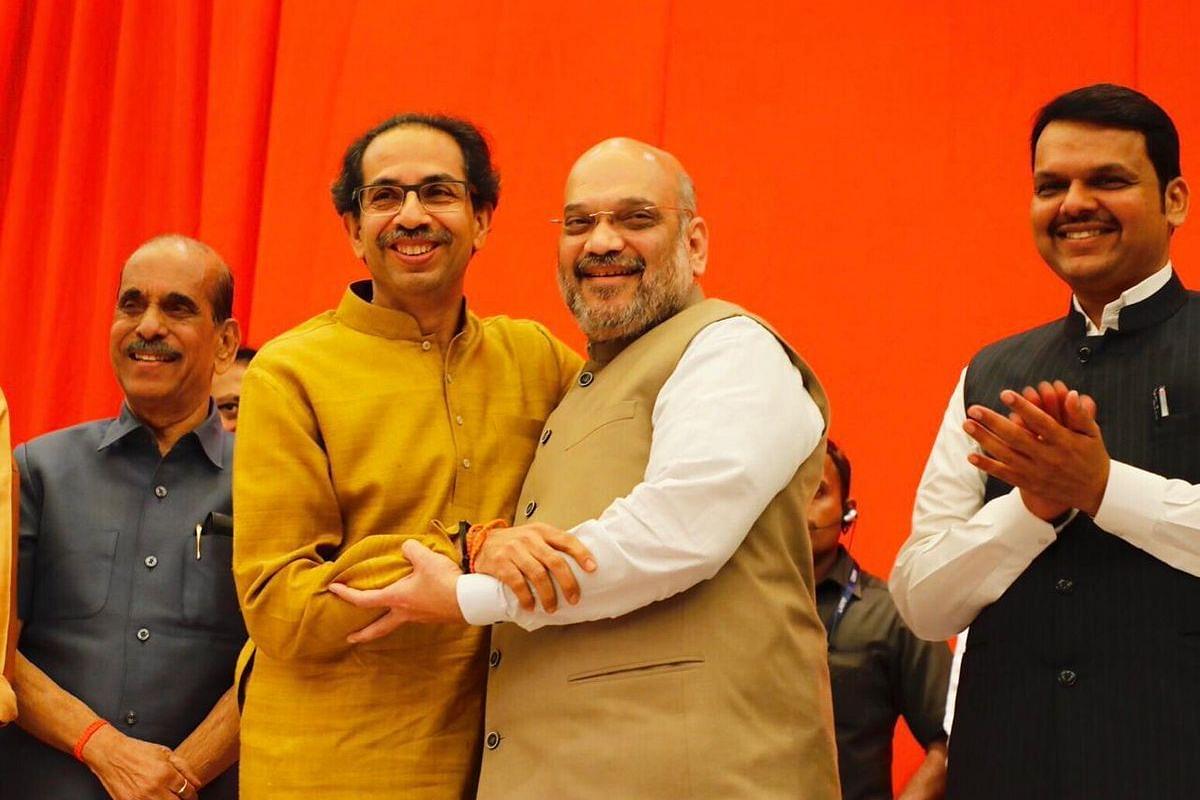 As we step into the 2019 polls, one is reminded by several electoral historians of the shock National Democratic Alliance (NDA) defeat of 2004, or rather the unexpected Congress victory of 2004. There is one statement by the current Vice-President of India, Venkaiah Naidu – he was then the president of the Bharatiya Janata Party (BJP) that I am vividly reminded of – we have Atal, Agenda and Alliance.

The 2004 elections were held on the back of one of the worst performances of the BJP in Uttar Pradesh. The party won only 88 assembly seats in the 2002 assembly polls. This was followed by one of the most ill-perceived alliance governments in the eyes of the BJP voters. A Bahujan Samaj Party (BSP)-BJP coalition with the BJP as a junior partner. A complete decimation of the BJPs’ base followed, which reflected in the party’s performance in the 2004 Lok Sabha polls.

Cut to 2019, yes, there is an Samalwadi Party-BSP-Rashtriya Lok Dal alliance, which will combat the BJP, so a repeat of 2014 is unlikely. But unlike the 2004 election, which was held in the background of a near mass desertion of its core voters, this election is being held in the realm of a footprint that is between 37 per cent to 44 per cent vote share estimate in UP, from the most conservative poll to the least conservative. On an average, a party with 40 per cent vote share.

Given the fact that the Congress is still a separate contestant, and the 2014 vote shares of SP, BSP and RLD also add up to 44 per cent, this is more or less a balanced fight, with no one side expected to get a walkover. This is markedly different from 2004, when the BJP was driven out of contest (neither first nor second) in several Lok Sabha seats across UP, as a consequence of its shrinking footprint.

Similarly, let’s take Maharashtra, the state delivered an almost evenly split 25:23 verdict in 2004. This was on the back of a stabilising vote share between 34 per cent and 40 per cent for the BJP-Shiv Sena alliance in the early part of that decade. Today, the BJP-Sena alliance starts with a new threshold of 46 per cent in Maharashtra.

A 2014 Lok Sabha alliance vote share of about 50 per cent, and a 2014 assembly election vote share, when the two parties contested separately, adding up to about 46 per cent of votes. There are no signs of a shrinking footprint – in fact the BJP has expanded in local self government elections in Maharashtra, at a pace threatening not just the Congress-Nationalist Congress Party alliance, but its own ally the Shiv Sena as well. This means that unlike the 2004 Lok Sabha elections, when the BJP-Sena started may be on a sub 40 per cent footprint today, they start with a footprint over or above 45 per cent, which again makes for a performance superior to 2004.

In Gujarat, the BJP almost shared the honours with the Congress in 2004, 14:12. With the Prime Minister hailing from Gujarat, and in the face of the ruling coalition building several micro-level social alliances in Gujarat, through defections of sitting Congress MLAs – with communities like Kolis and other Other Backward Classes (OBCs) like Ahirs, where the Congress has had a significant presence – the BJP would be putting a more combative show than in 2004 or 2009.

In a way, the alliances show the party is acknowledging the challenges in Gujarat. It also means that the 2014 tally of 26/26 cannot be repeated. But the careful crafting of social alliances way in advance of the general elections also means that an even sharing of honours, the way it happened in 2004, is unlikely to happen.

Over to the south. Very few people remember that if the NDA wins a seat in Kerala this time, it won’t be the first time it does so. In the halo of the surprise Congress win in 2004, most analysts forget that P C Thomas of Kerala Congress won the Muvattupuzha Lok Sabha seat as an NDA candidate, albeit with a small margin.

Looking at the post Sabarimala surge, it is likely that there could be a win or two this time, but the probability of a larger win than 2004 is much higher given the growth of the footprint of NDA with the inclusion of the Bharat Dharma Jana Sena or BDJS in the alliance as well.

Similarly, in the face of a Dravida Munnetra Kazhagam (DMK) sweep in Tamil Nadu, whatever little that NDA gets in the state will be more than two seats of 2014, and the zero tally of 2004. As the elections unfold, it is becoming increasingly clear that the one-way sweeps that characterised the 2004 and 2014 elections in Tamil Nadu do not hold in this election, but the edge to the DMK alliance is quite clear.

As a matter of fact, it must be noted that though Tamil Nadu is known for its one-way sweeps, from the last six Lok Sabha polls (from 1996, whence the current coalition alliances – UF/UPA/NDA starting taking shape, and smaller parties in Tamil Nadu started gaining prominence) only three elections so far – 1996, 2004, and 2014, have awarded one-way mandates. The other three Lok Sabha elections, have kept the winning alliance checked below 30 out of 39 and have permitted a respectable tally to the other front. The current scenario looks somewhat similar to that.

The other differentiating factor of these elections is the formation of mahagathbandhans. Two of these did not exist in 2004. The one in UP and the one in Karnataka. But for the fact that Ram Vilas Paswan being on the side of NDA, the mahagathbandhan in Bihar looks more or less similar to the one we have had in 2004 – Paswan being a plus for the NDA – the ones in UP and Karnataka being new ones that merit attention.

On paper, the mahagathbandhan in UP appears pretty strong but the empirical evidence of its ability to convert votes fully is based on the bypolls that were characterised by extremely low turnouts. By one estimate, the drop in turnout led to a less than 20 per cent fall in absolute votes of the SP-BSP as a combine but accounted for about 80 per cent of the drop in the absolute votes of the NDA. This means that if the turnouts in the Lok Sabha polls, were to be in line with earlier Lok Sabha polls, and not in line with the bypolls, the NDA would do substantially better than it did in the bypolls.

However, one must not undermine the careful caste calculus worked out by the mahagathbandhan. They have political outfits representing the smaller communities as well as several OBC communities such as Rajbhars and Kurmis at the local level striking political bargains that would maximise their leverage. However, the takeaway is that turnouts can make a difference and more so to the NDA as a corollary of the bypoll results.

In Karnataka, the Congress-Janata Dal (Secular) alliance is fraught with limitations of territory.vOther than the non-urban areas of Mysore Karnataka that is leaving out Bangalore city, the JD(S) has a base in about eight Lok Sabha seats. Most of its votes outside this belt are largely driven by candidate selection and not all of it might be completely transferable.

In the run up to the 2018 assembly polls, several of these leaders crossed party boundaries to satisfy immediate prospects. For the alliance to succeed, a substantial vote transfer is required, it’s only available in the eight constituencies of rural Mysore Karnataka, and not elsewhere. Now in those eight, the seats that currently appear viable for a vote transfer and are free from high-voltage ground discord between the Congress and JD(S), are only four – Bangalore rural, Chikballapur, Chitradurga and Kolar.

These seats are already with the Congress. One of them Tumkur, the Congress has surrendered to JD(S), and it is seeing two rebels. The two currently held by the JD(S), Hassan and Mandya, pose a challenge for the JD(S) due to ground discord between the workers. The Congress already has a sitting Member of Parliament in Chamrajnagar. That leaves only one seat from where the mahagathbandhan can possibly benefit, which is Mysore. This limitation in adding value to the alliance is what one calls limitations of territory.

On the contrary, in North Karnataka, where the mahagathbandhan has little transferable vote, the BJP narrowly lost two seats last time – Chikkodi and Raichur, and might try to pick those from the Congress, while losing Bellary out to mahagathbandhan. Karnataka, thus, could be poised for even stevens in spite of the presence of mahagathbandhan.

There is one state, however, where a new type of mahagathbandhan is striking at the United Progressive Alliance (UPA) more than at the NDA. It is the state of Maharashtra, where the Prakash Ambedkar-Asaduddin Owaisi alliance is threatening the roots of the UPA, by fielding prominent Dalit and Muslim leaders in triangular contests. Ambedkar himself has decided to contest against former home minister Sushil Kumar Shinde in Solapur.

Thus, while mahagathbandhans are the key narrative of this election, the path of the journey and the lay of the land are much different from 2004, when alliance arithmetic pulled off several surprises. Yet, it is these very voters who gave us terms like rout, landslide and shock defeat. They could give us some more words to add in the lexicon in the days to come.