Zero Marx: How The Left Has Divorced Itself From Its Core Hindu Vote Base 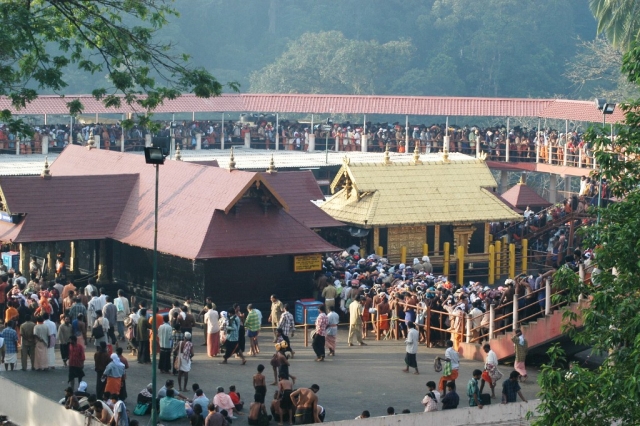 The Indian Left’s efforts to run with the hare and hunt with the hounds over the Sabarimala case show how far removed it is from Hindu realities. After loftily telling the Supreme Court that it was in favour of allowing women of all ages to enter the Ayyappa temple, which has its own unique tradition of treating the deity as a ‘naisthika brahmachari’ (permanent celibate), it is now facing a whirlwind of protests politically and socially from the Bharatiya Janata Party (BJP) and Congress, from women devotees of Swami Ayyappa who respect the traditions, and the thantri of the temple and the Pandalam royal family, which raised the temple. Both the thantri and the royal family have declined to meet officials of the Travancore Devaswom Board and the state government in an effort to defuse the crisis before the temple reopens on 17 October.

This means a confrontation between traditional devotees and some cultural vandals who have made this a feminist issue may become unavoidable. If the Left has any sense, it should issue an ordinance maintaining the status quo at the temple at least temporarily (which means not allowing women in the 10-50 age group until at least the Supreme Court gets to hear the several review petitions that have come up before it). The five-judge bench of the Supreme Court, in a 4-1 judgement last month, struck down the temple’s restrictions on women of the reproductive age from entering the shrine. The only dissent was from the lone woman on the bench, Justice Indu Malhotra.

However, the real problem with the Left in India is that it has an Abrahamic force, divorced from Indian, and especially Hindu, roots. And this despite the fact that it is the Hindu vote that has kept it in power in West Bengal, Tripura and Kerala so far. The Left has refused to acknowledge this reality, and its foot-soldiers in academic institutions have been anti-Hindu in their official posturing, whether it was in their rendering of Islamic history or in the kind of nonsense history they peddled on behalf of the Babri Masjid petitioners before the Allahabad High Court (read about the Left perfidy in the Babri case here). And now, they have done the same in the Sabarimala case.

The Left is an anachronism and misfit in India largely because it chose to force-fit Indian realities in a hackneyed Marxist framework. Karl Marx wrote most of his speculations on India without coming within a thousand miles of the country, which meant that his information was based on the same distortions peddled by Western Indologists and others with similar prejudices. This is why scores of Indian regional parties, with far less intellectual heft than the Left, achieved political growth through their discovery of caste loyalties while the Left stuck to its class theory and came a cropper. Its academicians pontificated about empowering the underclass and wrote subaltern history, but when genuine subaltern classes came to power – Mayawati, Lalu Prasad, Narendra Modi – it did not discard its faulty lenses.

Put simply, the Indian Left’s lenses are no different from the Abrahamic lenses of the West, for Marxism in the West is a logical extension of the universalisms created by Judaism, Christianity and Islam. In India, Marxism thus had no understanding of the essentially plural nature of Indian universalism.

In the Abrahamic worldview, there are only binaries. My god or your god. My book and nothing else. My way or the highway. There are no spaces for nuances or the grey zone. Thus, Sabarimala has to be about equality of genders or anti-women discrimination, when there are words like differentiation and diversity that describe its practices better. If you want to fight gender battles in the temple, there are far better issues to fight for than the lone differentiated temple called Sabarimala. For example, why not fight for greater women priests or women discovering their Stree Shakti in temples dedicated to their empowerment?

Which still leaves us wondering why the Left even found some traction in the three states it has often ruled. Actually, the reason is so blindingly obvious that most people miss it. After Partition, the Congress took the minority vote, by promising protection to Muslims. This left Hindus with no alternative but to opt for the Left, which at least didn’t appear to be keen to appease minorities at the cost of Hindus. In Tripura, the Left grew on the base of the Hindus driven out of Islamist East Pakistan and Bangladesh. In Kerala, it is the Congress-led United Democratic Front (UDF) which is a communal coalition, with Muslim, Christian and small community parties running the show. The Congress is the only one with some Hindu following.

It needs a daft political leadership with its head buried in sand to not realise that the Left in India was built on a Hindu vote base. And yet, whenever it came to the crunch, especially in post-1967 India, neither Left academics nor the political leadership of the Communist Party of India-Marxist (some earlier CPI leaders in the united Communist Party were not so deracinated) understood the Hindu foundations on which their communism was built.

The Left found Hindus, with their openness to agnostic and even atheist beliefs, more accepting of their ideology than Abrahamic groups like Christianity and Islam – and did not even figure this out for decades. In Abrahamic theology, there is place for only one god and that god is not Marx even if all these ideologies draw from the same well of binary universalism. If I am right, you are wrong.

Having repeatedly decided to insult and abuse their core voter base by embracing patently false notions of Abrahamic secularism (in Islam, there is not even a pretence of separating mosque from state, for the Prophet was political, military and spiritual leader of his flock all rolled into one) when true pluralism and acceptance of difference was embedded in the essential ideas of India – especially Hindu, Jain and Buddhist India.

With the rise of a new party claiming to represent Hindus – the BJP – the Left has no place left to hide, and is steadily shrinking in the three states that opened their hearts to it. In Bengal, the BJP is fast replacing the Left by eating into its Hindu base, and in Tripura this has already happened. It was left to the Keralite Left to shoot itself in the foot to give the BJP its opening for widening its Hindu vote base. Even the Congress, which has now boarded the Sabarimala bandwagon, realises that if it does not woo its partly Hindu base, the BJP will eat its lunch.

In Kerala, the Left arrogantly thought that the state’s high scores on human indices was its own progressive contribution, when the reality is that this differential preceded its rise to power, thanks to the enlightened attitudes of the local Hindu rulers and social movements led by Sree Narayana Guru, who emancipated the downtrodden Ezhavas. The Left simply took this constituency over, and pretended that the Hindu enlightenment that preceded them did not exist. Until the BJP started wooing the Ezhavas and the Nairs, the Left did not deign to honour Sree Narayana Guru or celebrate Hindu festivals with any degree of pride.

In contrast, consider the reaction of Mamata Banerjee in Bengal when confronted with the BJP’s rise and the Left’s response in Kerala. Banerjee, who too built her government on a broad Hindu base, went in for Muslim appeasement in her first term. But once the BJP started chipping away at her Hindu base, and with the Congress retaining its core Muslim vote base in areas with Muslim preponderance like Malda, Murshidabad and parts of Dinajpur, she saw the writing on the wall, and started wooing back her core Hindu voter. Hence the efforts to fund Durga puja with government money, which now has her new Muslim voters upset.

She may or may not succeed in her efforts to water the roots of her Hindu vote base in Bengal, but the Left has no clue on why it is slipping so badly. If it does not start its own “discovery of India”, where its ideology is re-rooted in Indic realities, it will find itself abandoned on the dungheap of history. Even accepting the reality of class antagonisms, Marx is the wrong place to look for ideas on India.

For starters, the Left Democratic Front in Kerala could save face by issuing an ordinance on Sabarimala, and make amends for the mistake it made before the Supreme Court by openly giving its Hindu base a kick in the shins. It can claim that it wants to maintain status quo until the apex court gives its verdict.

Sabarimala can either be the Left’s reinvention or its final rites.