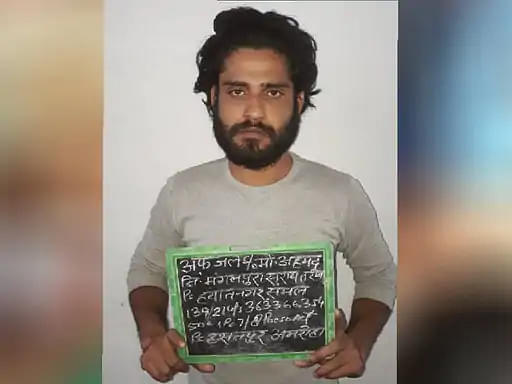 A 25-year-old man named Mohammed Afzal, who was accused of concealing his religious identity to trap a minor girl in relationship for the purpose of her conversion, has been convicted by an Uttar Pradesh court.

Newspapers have reported it as the first conviction under the UP’s anti-conversion law that came into effect from November 2020.

The law is named as the Uttar Pradesh Prohibition of Unlawful Conversion of Religion Act, 2021 (Anti-Conversion Act), but loosely referred to as the ‘love jihad law’.

The court order says that Afzal posed as Armaan Kohli and a Lord Shiva devotee to trap the 16-year-old girl in a relationship. He made her elope with him, away from the guardianship of her parents, from UP to Delhi. He did all of this to forcefully convert her to his religion.

The district court of Amroha sentenced Afzal to five years in prison with a fine of Rs 40,000.

Kapila Raghav, additional district judge under the special POCSO court, observed that the prosecution succeeded in proving the accused guilty.

The court also observed that the minor was subjected to repeated physical assaults and molestation for conversion and that she was also threatened with murder if she dared to protest.

The first information report in this case was registered at the Hasanpur police station in Amroha on 2 April 2021 (number 139/2021).

The statement recorded in the FIR of the girl’s father, Sharad Agarwal, says that Afzal visited the nursery run by him a month earlier to buy plants. There he met his daughter.

On the morning of 2 April 2021, the girl went missing from the house. A neighbour, Faizal, told him that he saw her going with four-five men and two women.

Sharad initially thought she must have gone out with her friends, but when there was no trace of her, it became clear that she had been made to elope by Afzal on the pretext of marriage, for her conversion.

The police booked Afzal, who is a native of Sambhal district, and an unidentified accomplice, under IPC sections 363 (kidnapping) and 366 (abducting or inducing woman to compel her marriage), and sections 3 and 5(1) of the UP Prohibition of Unlawful Conversion of Religion Act.

As per the court order, when the girl was recovered, she said in her statement, which was recorded under section 164 of the CrPC, that Afzal introduced himself as Armaan Kohli when he first contacted her on Snapchat (a messaging app).

He described himself as a ‘Shiv bhakt’.

It was using this name – Armaan Kohli – that Afzal chatted with her through various messaging apps. He talked to her for a month before making her elope with him.

She said that when she was aboard a bus with him, she was too scared to tell anything to the conductor or the driver. She said he molested her and forced her to convert to Islam after they reached Delhi.

During the course of the investigation, the police added IPC sections 354 (assault) and 506 (criminal intimidation), along with sections 7/8 of the Protection of Children from Sexual Offense (POCSO) Act 2012 in the case.

The girl’s age, at the time of her going missing, was ascertained from her school records as 16.

The court order on 17 September 2022 says that the prosecution proved and the court accepted that the minor was trapped, assaulted, molested, kidnapped and deceived by the accused.

The court order also mentions that the minor was forced to convert to the religion of the accused on the pretext of marriage.

Cases such as the one narrated above, follow a pattern of crimes which has been given the name ‘love jihad’ by Hindu, Sikh, Christian, Buddhist, Jain and tribal groups.

Swarajya has reported hundreds of such crimes of the same pattern, with several testimonies of victims sharing traumatic experiences.

Also Read: Lucknow Woman Accuses One Faizal Ahmad Of Hiding His Religion, Marital Status To Marry And Convert Her