Drought, Floods, And Tears: Why The Bhoomi Pujan For Ken-Betwa River Linking Project Will Be A Historic Event For Bundelkhand 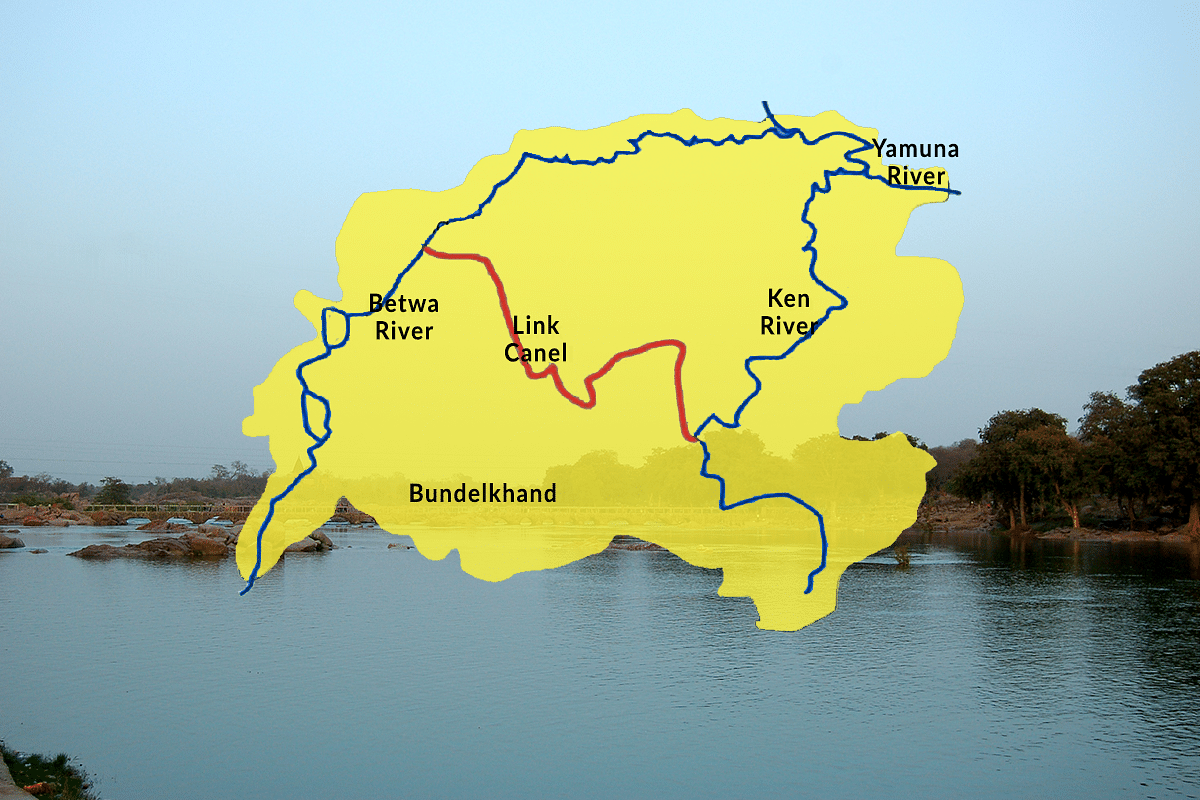 Madhya Pradesh Chief Minister Shivraj Singh Chouhan met Prime Minister Narendra Modi in Delhi on 3 February and reportedly invited him for the bhoomi pujan of the Ken-Betwa linking project. CM Chouhan thanked PM Modi on behalf of the people of the state for sanctioning Rs 44,000 crore for the project in the Union Budget. He told the media after his meeting with PM Modi that the Ken-Betwa linking project has the potential to change the face and destiny of the Bundelkhand region.

Chouhan had said last year that the ambitious Ken-Betwa link project was a dream of former prime minister Atal Bihari Vajpayee which PM Modi was now turning into reality. "This project will create a new sunrise of development and progress" in the Bundelkhand region of Madhya Pradesh, he said.

The Ken Betwa linking project happens to be the first endeavour under the National River Linking Project. PM Modi at helm, Chouhan -- the leader who has seen the fruition of the river linking project from Vajpayee to Modi, and local politicians, especially those belonging to the BJP will mark a beginning that is expected to bring relief to people living in the water-parched region.

In Damoh, one of the districts of Madhya Pradesh lying in the Bundelkhand region, Santosh Athya, sarpanch of a village in the Batiagarh block says that he finally sees a ray of hope for better days. He told this writer over the phone that the news of Chouhan's invitation to PM Modi has reached people and they believe that change will become real.

Water scarcity, parched land, and day-to-day struggles in living and in agriculture owing to low rains in the region have marked the lives of people, Athya told Swarajya over the phone.

Athya says, "People's lives have suffered, agriculture has suffered; it did not rain well this year and for the last five years, farmers have not been able to grow soyabean, which was a staple crop here for us besides urd. The water levels have decreased and boring-efforts reveal disappointments in the areas marked for boring as large parts of the region are hilly. Tanks of water have to be called in for basic needs."

He adds, "All this had led to a feeling of dejection. There are no industries, there is lack of opportunities for manual work. This has led to outmigration -- especially in the weaker sections of the population. People leave the region for livelihood in Maharashtra, Delhi, Rajasthan and other states."

The Ken Betwa linking project is significant to the Bundelkhand region in Madhya Pradesh, where people of the region understandably will benefit from the intervention in the water-starved parts of the region
to get relief from water scarcity. Owing to its focus on the transferring water from the Ken river to the Betwa river (both tributaries of the Yamuna), the project is expected to benefit Sagar, Panna, Chhatarpur, Tikamgarh, Damoh, Datia, Vidisha, Shivpuri and Raisen.

How will the river linking project benefit the people of his village, district and the region? Athya speaks for Bundelkhand from a village in Damoh. "Poora Bundelkhand mein (paani) level ho jayega," he says. "Level" could be a word used for the expected "balance". Athya informed Swarajya that currently work is going on in villages in the region under the Har Ghar Jal Yojana. "Line ka kaam pragati par hai (water-line related work is in progress). Things would have been better had water from the Pancham Nagar Dam (Damoh) been directed towards us. That would have been a big relief to the people," Athya adds.

In 2019, the Firstpost reported on the worrying situation in a village in Damoh district where people were "drinking water from dirty ponds frequented by animals for drinking and bathing...", adding, "that’s enough evidence that the situation is critical."

PL Tantuway, MLA from Hataa in Damoh representing the BJP, says that the beginning of work on the project is a confirmation that the BJP-led governments at the centre and state have been serious about serving the people of Bundelkhand. The expected time for the completion of the project is eight years, yet, the project is a step that will end the difficulties of people in the districts of the Bundelkhand region.

Enveloped in the larger goals of providing people of Bundelkhand better lives with the help of the river linking project is the aim of making the region self-reliant -- aatmanirbhar. Chouhan himself has reportedly said that the project will bring new dimensions of self-reliance and prosperity to the people of the region, as it will help in increasing agricultural productivity, in improving people's incomes and in improving their living standards.

The project was declared as a National Project by the Government of India. It is conceived to develop in two phases. In the first and the second phase, the Daudhan Dam complex and subsidiary units including
tunnels, the Ken-Betwa Link Canal, powerhouses, the Lower Orr Dam, a barrage and the Bina Complex Project, will be completed.

The Jal Shakti Ministry says in a note that a tripartite Memorandum of Agreement (MoA) was signed on 22 March 2021 "among the Hon’ble Chief Ministers of Madhya Pradesh and Uttar Pradesh with Hon’ble Minister for Jal Shakti in the august presence of Hon’ble Prime Minister of India..." It added that a Special Purpose Vehicle (SPV) -- Ken-Betwa Link Project Authority (KBLPA) -- will be formed for implementation of the project.

The Jal Shakti Ministry states that the Interlinking of River (ILR) programme "is of national importance and has been taken up on high priority." The mission of the programme, according to the Jal Shakti Ministry, "is to ensure greater equity in the distribution of water by enhancing the availability of water in drought prone and rain-fed
area."

It was under the NDA government under former prime minister Atal Bihari Vajpayee that the thought of river linking projects in order to address the challenges of flooding and drought in the different regions caught pace.

Rajesh Prajapati, MLA from Chandla in MP's Chhatarpur district told this writer over the phone that the Ken Betwa river linking project will come as a blessing to the people of Bundelkhand, as it will go towards removing the challenges they faced due to the scarcity of water.

He added that it was due to the efforts of former PM Atal Bihari Vajpayee, PM Narendra Modi, MP CM Shivraj Singh Chouhan and former union minister Uma Bharti that the people of Bundelkhand can see the river linking project become reality.

The work of interlinking rivers was taken up as a priority by the Narendra Modi led government in 2014. It gave people living in the drought prone region of Bundelkhand hope of access to better lives.

Brijendra Pratap Singh, MLA from Panna in Damoh told this writer over the phone that people living in Bundelkhand will definitely benefit from the Ken-Betwa inter linking project. "People have faced the problem of scarcity of water due to an uneven flow -- across all districts of the region. The policies of Atal Bihari Vajpayee including those focussed on villages and connectivity, were driven by the value and thought that the soul of India resides in the villages of India. Post Independence, the Congress did not think of building roads to the villages, today, due to the efforts of PM Modi, villages are getting road connectivity, which is the lifeline of development. Similarly, the interlinking of rivers is a step arising from those very set of values towards serving people."

Pending forest, wildlife and environment clearances came ahead of the efforts of linking the two rivers. The concerns were surrounding the impact of the river linking project on the Panna tiger reserve and the
population of animals there. In February 2016, union minister Uma Bharti took up the issue of green clearances for the Ken Betwa river linking project with then environment minister Prakash Javadekar.

With the dry and drought prone region posing a similar set of
problems before the people in the backdrop, the BJP-led governments in UP and MP under Chouhan and Yogi Adityanath have been able to register efforts towards ensuring the availability of water for life and
agriculture, in people's memory.