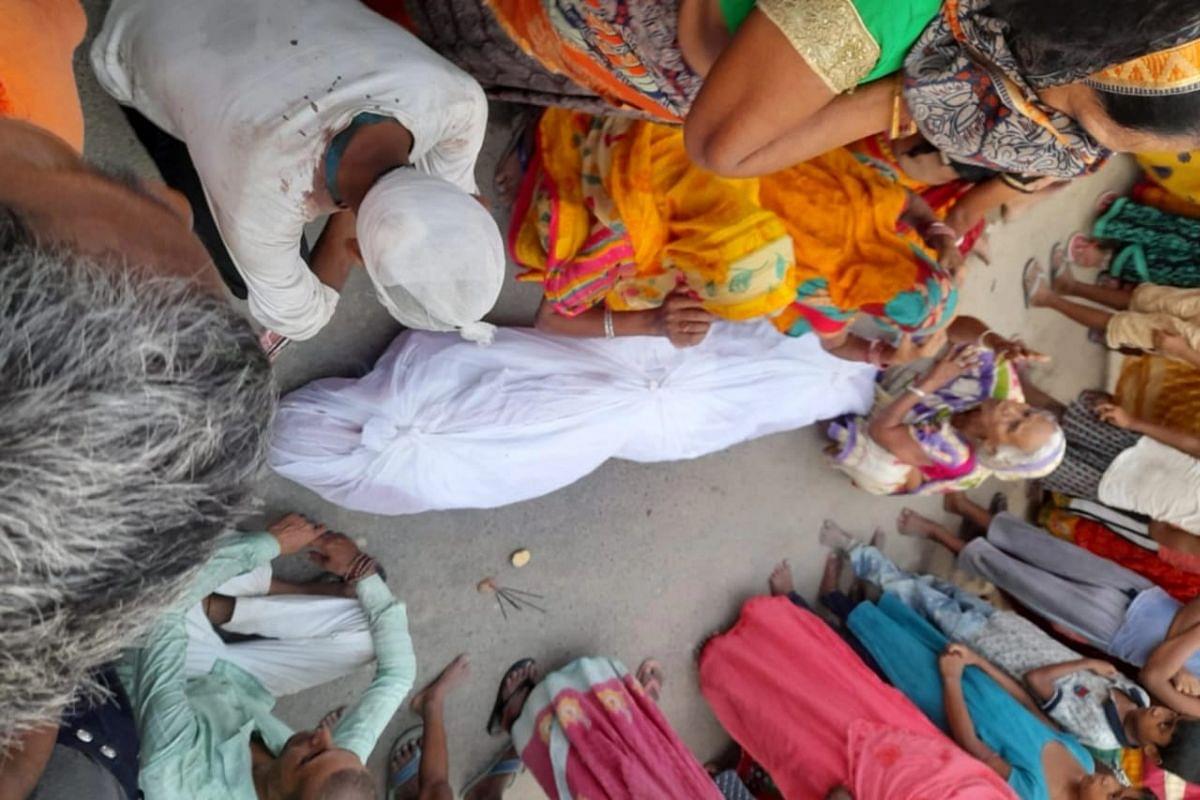 Body of the victim, Dharam Sahu, in front of the police station

A Hindu family in Bihar’s Darbhanga district has accused a Muslim man and a mob of his co-religionists of killing an adult male member while chanting communal slurs.

The victim, Dharam Singh Sahu, was maternal uncle of a woman named Kajal who the key accused, Mohammed Azmal Nadaf, would stalk and harass. As per the complaint, Dharam had confronted Azmal and asked him to stay away from Kajal.

Dharam is survived by his wife and three-month-old daughter.

The police have made 13 arrests so far, despite more than 20 men identified in the family’s complaint. Soon after news of the incident spread in the area, the administration cut off the internet.

Dharam’s brother Ajay told this correspondent over the phone that the local police are unsupportive and reluctant to arrest all the culprits. He also called the key accused, Azmal, a “love Jihadi”.

A first information report (number 156/2022) in the case was registered at Ghanshyampur police station of Darbhanga district in Bihar on 16 June 2022.

The statement of the complainant, Indal Sahu, who is brother of the diseased, as recorded in the FIR says:

On 15 June 2022 around 5:30 in the evening, he, along with his brother Dharam and nephew Suraj Kumar, who is son of Vipin Kumar (Indal’s brother-in-law), were sitting in front of their house.

They received a call from the in-laws of Vipin’s daughter Kajal. They said that they were receiving repeated calls from an unknown number. When the three men checked the number on the internet, they found that it belongs to one Muhammad Azmal Nadaf, who is a resident of Badia Tola area of Ghanshyampur village.

Azmal was roaming in front of the house where Indal, Dharam and Suraj were sitting. They stopped Azmal and asked him why he was repeatedly calling their relatives. Azmal ran away from the spot.

It was an all-Muslim mob. They attacked the three men with an intent of killing them.

One of the attackers, Nadaf, said, “Hindus are rising up too much, let’s ‘halal’ them.”

Soon the entire mob started attacking with Allah-hu-Akbar slogans. They were equipped with sticks, spears, axes and other sharp weapons.

When the family members raised an alarm, villagers assembled and the attackers fled.

Dharam had sustained the most injuries. He was taken to a government medical facility in Ghanshyampur from where he was referred to the district hospital in Darbhanga. He died in the hospital at Darbhanga.

After Dharam’s death, the state administration cut off the internet in the area for a week. This correspondent tried reaching Ghanshyampur police through phone numbers available on the internet but the numbers were unreachable.

On 1 July, this correspondent took the personal contact number of SHO Ghanshyampur from the victim’s brother, Ajay.

SHO Parmanand Lalkand told this correspondent that 13 people had been arrested including six women, and that further investigation was on.

This correspondent again called up SHO Lalkand on 7 July. He gave the same reply, that 13 people had been arrested and investigation was on.

A local news publication quoted the Deputy Superintendent of Police of Biraul, Manish Chandra Choudhary, in a report published on 16 June as saying that “in a love affair case, a youth was beaten to death with sticks and bats. In this case, a few people have been taken up for interrogation and the police are investigating the matter” (translated from Hindi by Swarajya).

What the victim’s family told Swarajya

This correspondent had a telephonic conversation with Ajay Kumar, younger brother of the victim.

He said that he and Dharam worked and lived in Gurgaon city in the state of Haryana. They had recently come to their home in Bihar for attending ‘Barsi’ of their father. Hindus mark a year of a family member’s death as Barsi.

Ajay has six siblings - four brothers, including Dharam, and two sisters, both of whom are married. Indal and Vijay are the other two brothers. Both their parents are no more.

Ajay and Dharam drove autorickshaws in Gurgaon for a living.

When they returned to their house in Darbhanga this time, they stayed at the house of one of their sisters as their own house is under repair.

Ajay said that the background of the murder is that Azmal was trying to coerce their niece, Kajal, into a love relationship to which they were vehemently against.

“Three months ago, we found that Azmal, who lives in our neighborhood, was after Kajal. She did not have a mobile phone, but was in touch with him through her mother’s phone. Kajal had just turned 18,” said Ajay.

Ajay and his brothers confronted Kajal and asked her to stay away from Afzal, saying he was a good-for-nothing drunkard, and also Muslim, which was unacceptable to them.

“She stopped meeting him. She blocked his number as well in front of us. But Azmal did not stop. He is a typical ‘love Jihadi’. He began following our daughter and tried to meet her. Dharam went to Azmal’s house to confront him and his family. He asked him to stay away from Kajal,” said Ajay.

It is pertinent to mention here that the term ‘love Jihad‘ is often used by Hindu, Christian, Sikh, Jain and Buddhist groups to describe the pattern of Muslim men targetting non-Muslim women for their conversion to Islam through Nikah. The term is believed to have been coined in Kerala by Christian groups more than a decade ago.

The family decided to marry off Kajal to a man from their Hindu community and matching caste.

“Kajal agreed to a match and was married on 9 June. She was happy,” said Ajay.

However, Azmal did not accept the wedding and continued to try to reach her. One day, he stopped her while she was in the market with a friend and threatened her that he would circulate their pictures clicked together.

Ajay says that Kajal told him that she had moved on and was happily married, but Azmal told her that he would not let her go that easily.

Ajay says that Kajal was very scared as she knew Azmal to be an addict who would go to extreme lengths in arguments.

One day, Kajal dialed Azmal’s number from her husband’s phone and begged him to leave her and her family and stay out of her life, says Ajay.

However, from then on, Azmal started calling her husband every other day. Azmal would call her husband while he was at work and also when he was at home.

Kajal’s marriage was already in doldrums when, one day, Azmal sent some pictures of Kajal and himself through Whatsapp.

Ajay says that the pictures were morphed.

“On the wedding day, Azmal had sneaked into the function and clicked a few pictures of Kajal and her husband. He morphed them to put his face on the groom. These are the pictures he sent. They were morphed but they created a scene in her house anyway,” says Ajay.

He added that some other pictures of Kajal and Azmal, though not obscene, were real.

Asked if he could share the morphed pictured, Ajay said no, he did not want to escalate that matter.

Asked if Kajal had married under pressure and she instead wanted to be with Azmal, Ajay said, “No. If she wanted Azmal, she would have eloped with him. There was a time gap of one month between the date when the marriage was fixed and the date of the marriage.”

It is pertinent to mention here that Ajay declined to let this correspondent speak to Kajal over the phone though she was at his house at that time.

Ajay said that after Kajal’s husband received the pictures, his father called Kajal’s family to their home to discuss the entire matter.

It was then that Dharam Kumar and his brothers found out the growing interference of Azmal in Kajal’s life.

Ajay says that when the men checked Azmal’s phone, they found the morphed and other pictures in the gallery section. Kajal’s picture was his wallpaper.

Azmal was unrepentant. He said “so what?“ and went away, says Ajay.

Soon, a mob arrived at the stop.

Ajay says that as per Suraj and Indal, there were more than 50 men. However, they could identify only about 20-25, who are mentioned in the complaint.

They were equipped with sticks and stones and other weapons.

“Dharam was attacked the most. Suraj sustained a head injury as a stone hit his forehead. Ajay was also badly injured,” says Ajay.

While elaborating about their locality, Ajay shared a demographic detail with this correspondent, saying, “The place we are currently living in has only seven Hindu houses. The colony consists of around 250 Muslim families.”

Elaborating on the attack, Ajay said that the attackers broke Dharam’s neck.

Dharam is survived by a wife and a three-month-old daughter. He was married only a year ago, says Ajay. They lived with him in Gurgaon but had come home with Dharam for ‘Barsi’.

Ajay says he is not in a position to go back to Gurgaon as he fears for his family.

“Many attackers are still roaming freely. They are murderers. They have killed my brother. How can I go back to work?“ says Ajay.

He also shared the family’s struggle to get the police to act on their complaint. He says that it was only after they protested in front of the police station with the dead body of Dharam that the police got into action mode and arrested 13 people.

Soon after the FIR, the internet was cut off in the area.

Ajay says that train tickets of Dharam, his wife and himself, to go to Gurgaon, were booked only a few hours before Dharam’s death.

Ajay says that the police are “trying to paint the issue as a love affair case”. “Instead, it was a targeted murder, my brother was killed for opposing ‘love Jihad’,” says Ajay, adding that he would not go to Gurgaon until the “killers are hanged”.