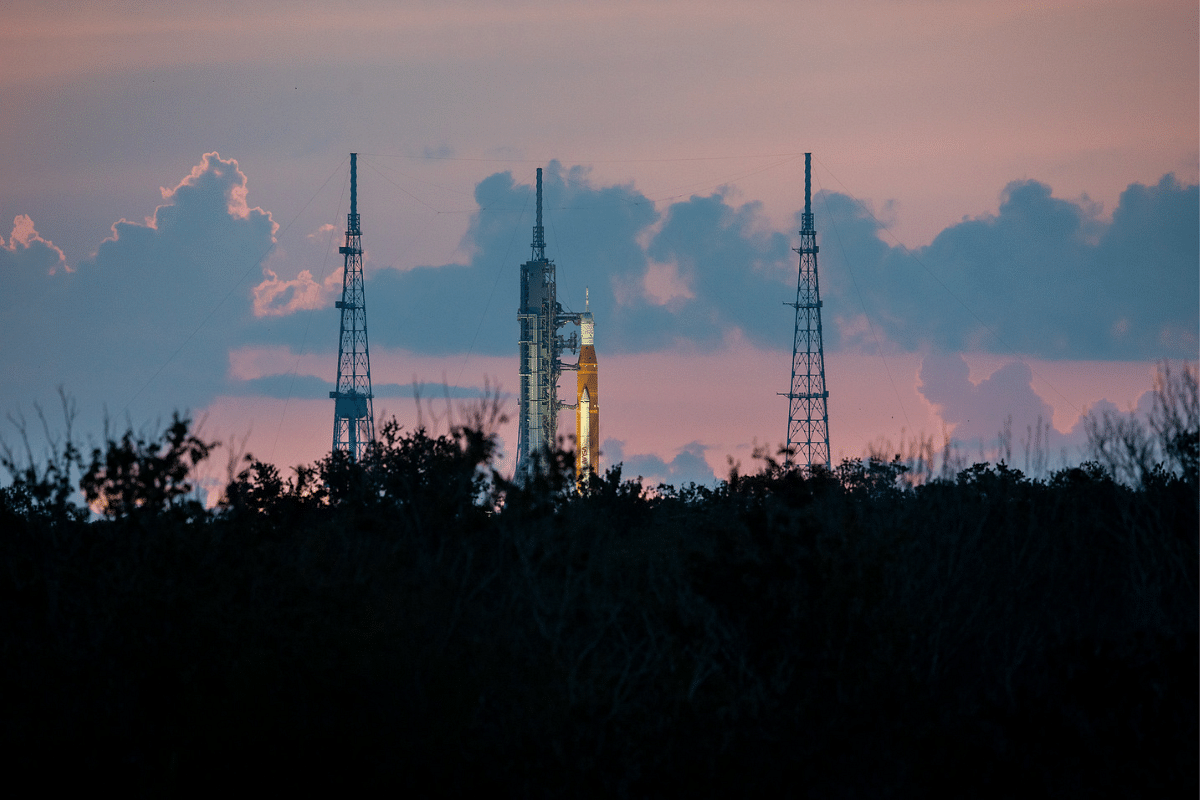 The SLS at sunrise is seen above the tree line. (Photo: NASA Artemis/Twitter)

1 September update: The Artemis I mission management team have given a “go” for a launch attempt on 3 September.

After the scrubbed launch on 29 August, the National Aeronautics and Space Administration (NASA) will try again on 3 September to debut its new Moon rocket and spacecraft.

The launch is part of the Artemis I mission: the first integrated flight test of the Space Launch System (SLS) rocket, Orion spacecraft, and exploration ground systems — the very systems that will ferry future astronauts on their way to the Moon.

The SLS is the biggest launch vehicle ever developed by NASA.

The momentous launch for a milestone mission around the Moon was to take place on 29 August, but it was called off after a technical issue was discovered.

“The issue that came up was an engine bleed that couldn't be remedied,” the voice on the NASA TV live stream making the announcement on the launch day said.

The issue was pinned down to the four RS-25 engines on the bottom of the core stage of the SLS rocket.

The engines weren’t able to sit within the temperature range needed for lift-off. Engine three, in particular, was found to be about 30 to 40 degrees Fahrenheit warmer than engines one, two, and four.

The engines needed to be about 40 degrees Rankine or -420 degrees Fahrenheit. Rough calculations by John Honeycutt, the SLS programme manager, suggest that while engines one, two, and four were around -410 degrees Fahrenheit, engine three clocked about -380 degrees.

Engineers were left evaluating the situation and collecting additional data to figure out a solution.

It is being considered that the temperature was off on engine three because of a faulty sensor. However, the team is relying on data procured from other sources, such as on the ground, in order to validate the engine temperatures on the vehicle.

“We have other temperatures and pressures across the engine. So there’s a suite of data. So what John (Honeycutt) is looking at, and what our team is looking at with his team is, what set of data do we have available to us, not just limited to the single piece of instrumentation, that can help us establish that we have good flow across those engines,” Artemis launch director Charlie Blackwell-Thompson said in a briefing.

Once this data is reviewed, a plan will be implemented accordingly.

NASA explained in a statement that the engines “must be thermally conditioned before super cold propellant begins flowing through them for liftoff.”

This is done by “increasing the pressure on the core stage liquid hydrogen tank to route, or “bleed” as it is often called, a portion of the approximately minus 423 F liquid hydrogen to the engines.”

This was an aspect of Artemis launch operations that was to be attempted for the first time during the launch countdown. It was known all along to be a risk to pull off successfully on launch day.

“In combination with that, we also had a vent valve issue on the core stage, and it was at that point that the team decided to knock off the launch attempt for that day,” Mike Sarafin, Artemis mission manager, said.

Prior to this snag, launch controllers had worked through several other issues, such as weather-induced tanking operations delay and a leak in the hydrogen tail service mast umbilical, which had cropped up in the run-up to launch.

On the new launch day, NASA plans to begin the engine bleed test about 30 to 45 minutes earlier in the timeline during the liquid hydrogen fast fill liquid phase for the core stage. The team believes this should work.

However, weather is still a bit of a concern.

“Right now, it looks like the probability of a weather violation during the count will be somewhere in the neighbourhood of 60 per cent,” said Mark Berger, launch weather officer with the United States Space Force’s 45th Weather Squadron.

Striking an optimistic note, he added that “we still have a pretty good opportunity weather-wise to launch on Saturday” because of the sporadic nature of rain showers expected and the availability of two hours to make the launch.

In case weather alone delays launch, another launch attempt can be made within 48 hours.

The mission management plans to reconvene on 1 September to review the flight rationale and overall readiness.

The Artemis I mission will see the Orion crew capsule, this time uncrewed, shooting for the Moon for an unprecedented lunar swing-by over 42 days, ending in a planned splashdown in the Pacific Ocean.

A successful Artemis I mission will provide the necessary confidence for NASA to embark on future lunar missions, including landing the first woman and first person of colour on the surface of the Moon no earlier than 2025, and destinations even further away.

Also Read: Artemis I: The First Test For Space Travel Back To The Moon, Explained