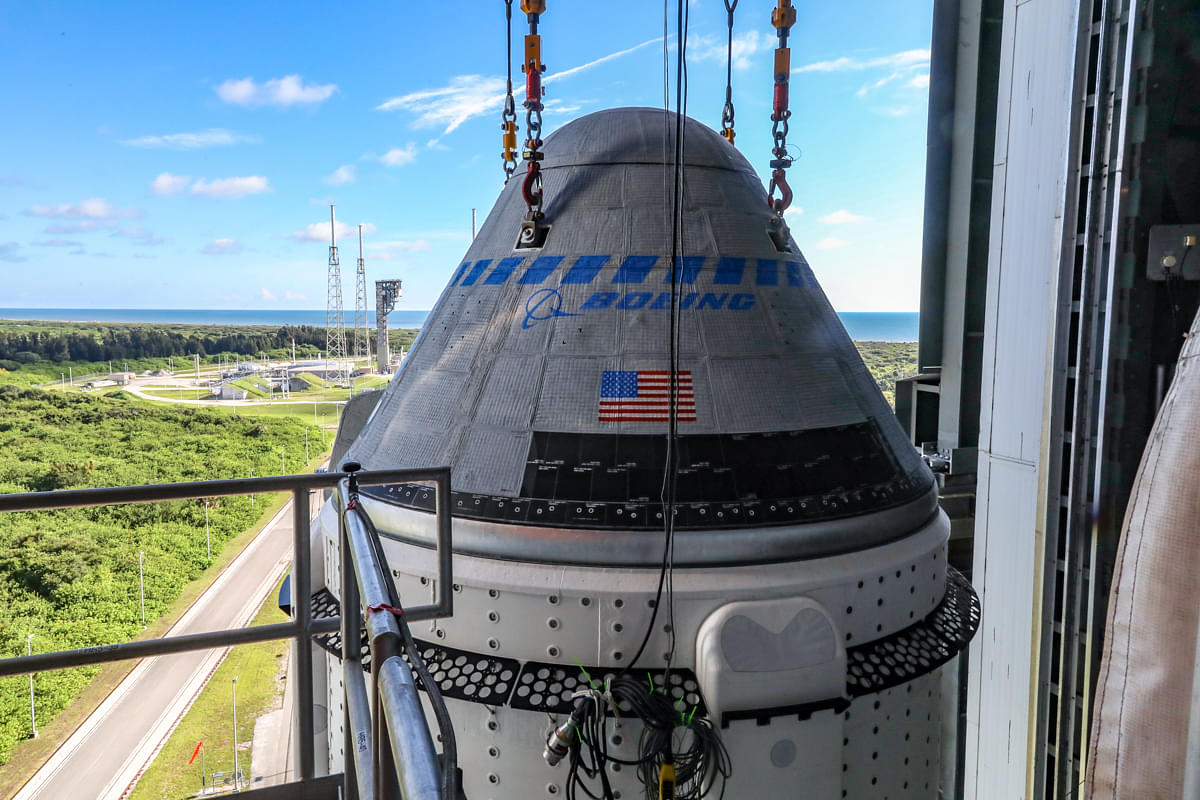 It was Boeing's second launch delay.

The CST-100 Starliner spacecraft was scheduled to take off for the International Space Station on 30 July before inclement weather led the company to stand down. (Initially, the freak incident on the space station with the Russian Nauka module was cited as the reason.)

For the protection of the #Starliner and #AtlasV, and to avoid inclement weather, we are rolling back to the Vertical Integration Facility (VIF).

The next launch attempt, planned for 1:20 pm eastern time (10:50 pm Indian standard time) on 3 August, was skittled because Boeing engineers — in their words — "detected unexpected valve position indications in the propulsion system".

According to the company, the issue was detected initially a day before the planned launch, after electrical storms hit the region of Kennedy Space Center, Florida.

After the scrubbed launch, a window was open to take off the next day, but it was not pursued because further spacecraft testing and evaluation was necessary.

"Our team cycled the Service Module propulsion system valves and is taking time to gather data for next steps. We've ruled out software as a cause for the unexpected position indications," a Twitter update said.

Starliner and the United Launch Alliance (ULA) Atlas V rocket that will be flying the spacecraft to the space station, were, therefore, rolled back from the launch pad to a facility at Space Launch Complex-41 for further inspection and testing.

Since then, troubleshooting work has been underway. Boeing has been working the propulsion system and generating data as part of its spacecraft evaluations.

"...Boeing and NASA teams will take the time they need to ensure the safety and integrity of the spacecraft and the achievement of our mission objectives," John Vollmer, vice president and programme manager, Boeing’s Commercial Crew Program, has said.

They are prepared to take the spacecraft to the Commercial Crew and Cargo Processing Facility at Kennedy Space Center for further checks and troubleshooting if required.

The launch may happen sometime this month, as Boeing is assessing possible launch opportunities in August. However, Starliner doesn't have an entirely open field of launch windows this month.

The Cygnus cargo spacecraft is set to launch on the Antares rocket from NASA’s Wallops Flight Facility in Wallops Island, Virginia, carrying over 3,700 kg of research, crew supplies, and hardware.

Later this month, a SpaceX Falcon 9 rocket is launching a Dragon 2 spacecraft on its third cargo resupply mission to the space station.

If the launch kicks off as per plan, it will take up a port on the space station and there won't be one available for Starliner, as per this report, until October.

Even in October, NASA's Lucy mission — a planned 12-year journey to the trojan asteroids around Jupiter — is set to take off on the Atlas V rocket that is flying Starliner to the space station.

All this is to say that Boeing may face limitations in locking in a date with NASA and ULA for its orbital flight test-2 (OFT-2) mission — and this is, of course, after they are able to resolve the challenge with the propulsion system valves that indicated “closed” positions pre-launch.

NASA and Boeing aim to take another step towards regular human space flight to the space station with a successful OFT-2 mission.

It will be the second uncrewed test flight of the aerospace giant’s CST-100 Starliner spacecraft as part of NASA’s commercial crew programme.

The first flight was completed successfully, although Starliner had not reached its planned orbit and not docked to the space station, in December 2019.

"CST" stands for Crew Space Transportation and "100" represents the Kármán line, an imaginary boundary separating Earth and space at an altitude of 100 kilometers.

The Kármán line was in the news recently after Amazon founder Jeff Bezos’ Blue Origin spacecraft went over the boundary in what was the company's first crewed space tourism flight.

The Atlas V is a two-stage rocket with two solid rocket boosters.

After Starliner takes off, it will commence orbital insertion burn about a half-hour into the flight to begin its journey to the space station. A day later, it will arrive at its low-Earth orbit destination.

Once there, it will dock to the Harmony module’s forward port. Then it will spend five to 10 days in orbit before undocking to make a return. It will then land in a desert in the western US to mark a successful flight.

The spacecraft will carry more than 180 kg of NASA cargo and crew supplies to the space station. It will come back to Earth heavier, carrying cargo of over 250 kg, including the reusable Nitrogen Oxygen Recharge System tanks that provide breathable air to crew members on the station.

In the driver's seat

The OFT-2 will be an uncrewed flight, but the commander’s seat on the spacecraft will not be empty. Like in its first orbital flight test, Boeing’s anthropometric test device “Rosie the Rocketeer” will occupy the important seat.

During the first flight, sensors fitted on Rosie provided data to evaluate astronaut experience. In the upcoming flight, data will be taken from sensors placed along the seat pallet, which is where the crew seats are held in place.

If and when approved for regular human spaceflight, Starliner will be able to carry four crew members and about 100 kg of time-critical scientific research for its NASA missions to the space station. However, up to seven passengers or a mix of crew and cargo can fly on Starliner.

The Starliner flight will carry out several tests.

On a basic level, the changes made to Starliner, including improvements based on the earlier flight performance, will be tested.

In-orbit operations and performance of various systems, such as avionics, propulsion, and navigation and control systems, will be verified.

NASA says an automated retreat capability will be tested during approach to the space station for when an issue might crop up on the docking axis.

In addition, the vision-based navigation system to autonomously dock with the space station will be tested.

The mission will provide Boeing the opportunity to showcase its capabilities across the major mission stages — launch, docking, atmospheric re-entry, and landing — while the data from the test flight will help NASA in certifying Boeing’s spacecraft for regular use in ferrying astronauts to the space station and back.

If the test flight turns out to be successful, the first human spaceflight to the space station on the Starliner capsule could take off towards the end of this year or early next year with three NASA astronauts on board.

Thereafter, it will look to carry out the six crew rotation missions to fulfill the order placed by NASA.

Boeing was picked alongside SpaceX by NASA in September 2014 to transport crew from the US to the space station.

This is part of NASA's commercial crew programme, in which it works with the private industry to build human transportation systems to the space station. With private players shouldering the workload of regular space station flights, NASA will be able to pool more of its resources towards accomplishing deep space missions, such as to the Moon and Mars.

NASA has certified SpaceX’s crew system and it's already being used to fly astronauts to the International Space Station and back. With a successful uncrewed flight test on the CST-100 Starliner, Boeing too will be able to carry out crewed missions to the space station.