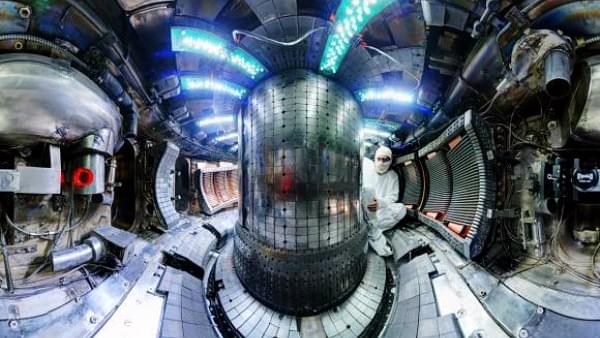 The interior of the Alcator C-Mod tokamak, where experiments were conducted that have helped create a new scenario for heating plasma and achieving fusion. (Bob Mumgaard/Plasma Science and Fusion Center, Massachusetts Institute of Technology)

The recent announcement by scientists of a major breakthrough in fusion research has gone largely unnoticed or with jaded acknowledgement among energy analysts. A team at the Massachusetts Institute of Technology's Plasma Science and Fusion Center obtained a tenfold increase in energy output from the Alcator (ALto CAmpo TORo, High Field Torus) C-Mod tokamak in an experimental run last year. The results were so exciting that researchers at the Joint European Torus in Britain decided to replicate them. Success has raised hopes that the first commercial fusion reactors might be on the horizon by the 2030s.

Nuclear fusion is considered by many to be the holy grail of energy, promising limitless clean energy with little to no waste production. Unlike fission, which splits atoms and releases excess binding energy from the daughter products, fusion combines atoms and uses energy left over from a more efficient atomic configuration. However, it has substantial challenges, and promises made from optimism than a grounding in engineering in the early days of the nuclear age – such as Lewis Strauss' famous 1954 declaration that electricity will become too cheap to meter in the future – have not yet panned out, causing scepticism among lay observers.

One challenge is that it is not easy to induce atoms into undergoing fusion. Incredibly high temperatures – at least 100 million degrees Celsius – and pressures are required to achieve it, and scientists have often described the process as igniting a small sun on Earth. This is achieved most commonly in one of two ways – inertial (ICF) or magnetic (MCF) confinement fusion. In the former, a high-energy laser targets a pellet the size of a pinhead to heat and compress the fuel; in the latter, radio-frequency heating is used and the fuel is contained in a torus-shaped device known as a tokamak. The famous International Thermonuclear Experimental Reactor (ITER) in Saint-Paul-lès-Durance, France, is an example of the latter.

Generating such temperatures is no easy feat, but to contain it within the confines of a small reactor is even more challenging. The ICF design bypasses this need by focusing a very powerful laser onto a few atoms of fuel of ten-billionths of a second; the high energy and short time frame means that the fuel pellet reacts before it can explode. The MCF, however, confines the plasma in a tokamak with helical magnetic field geometry, usually achieved by using superconducting magnets to contain the fuel.

The most common fuels for fusion are protium and deuterium, two isotopes of hydrogen, or deuterium and another isotope of hydrogen, tritium. Scientists focus on the lower total density portion of the mixture, usually 95 per cent deuterium, as it can heat up to much higher energies. The researchers at MIT, however, decided to create a three-ion mixture with trace amounts, less than 1 per cent, of helium-3 in the fuel. The energy output, in the realm of mega electron volts, has allowed scientists to study how such high-energy ions behave under fusion conditions and how they might best be contained.

Despite decades of experimentation, it is still difficult to maintain plasma at sufficient temperatures for long enough to achieve an efficient energy output. However, the tri-fuel is an exciting step in that direction. The results will allow researchers to make predictions about other fuel ratios and combinations that might yield even better energy outputs at lower energies.

Nonetheless, nuclear fusion is a technology that has been around the corner for decades, and present optimism about commercial fusion reactors within the next two decades should also be considered with caution. The Alcator C-Mod, for example, was mothballed soon after the successful testing of the helium-doped fuel. Substantial financial commitments will need to be made, and results are still a long way away from commercially viable.

Second, as scientists begin to maintain plasma in a high-energy stage for longer periods (the longest period so far is six and a half minutes by the French Tore Supra tokamak), new demands might be made on technology to withstand such intense heat and pressure for a commercially viable duration. It is important to note that even with the latest energy output breakthrough, no fusion reaction has yet produced more energy than was required to initiate a reaction – the Joint European Torus (JET) holds the record for this at 70 per cent of input power. ITER hopes to push these boundaries of time and energy further.

Third, a regulatory framework will have to be created for safe operation. This will take time for a new technology, and the cost of an inadequate safety environment could be high. Four, with so many unknowns about technology and regulations, it is as yet difficult to ascertain the economic viability of fusion reactors.

This is not to say that nuclear fusion is impractical or unviable. However, much like renewable energy and energy storage, it is a promise of times to come rather than an offer of immediate solutions to climate change and energy scarcity. That part of the nuclear spectrum remains the Generation III+ reactors and Generation IV designs such as molten salt reactors, thorium fuel and small modular reactors that are awaiting only market confidence.

Fusion research is very promising and must be pursued with earnest. As one scientist explained it, fusion plasma performance has increased by a factor of 10,000 over 50 years; research is now less than a factor of 10 away from producing the core of a fusion power plant. However, it cannot be an excuse for inaction towards cleaner energy now. This is not a complicated concept – like in any other industry, current products must be optimised until new designs enter the market. The MIT experiment takes us that much closer to achieving limitless clean energy with virtually no toxic byproduct.