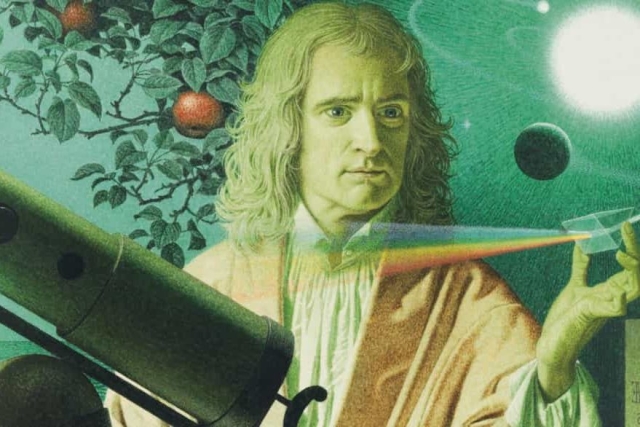 An illustration of Sir Isaac Newton

One widely prevalent misconception in respect of science is the belief that no theory is valid for ever, and that every new discovery disproves some previously held notions or earlier concepts. On the other hand a study of the history of science shows that except in some very rare instances, new discoveries have merely been modifications of, or improvements upon, old theories.

A few years ago, when K.C. Cole, the eminent science writer, was asked to speak on" Science and Creativity” to a group of American junior high school children, she gave a talk on Einstein’s “Relativity", a theory which has radically altered our fundamental concepts of matter, space, and time.

At the end of the lecture, a student asked her whether she had considered the possibility of Einstein having been wrong.

She felt that the question was indeed pertinent, especially since science seems littered with the remnants of “faulty” ideas e.g. heat is no longer considered to be a fluid; the earth is now not believed to be flat; no one accepts now that the planets revolve in perfect circles or that Mars is full of canals; and very few physicists take seriously the idea of an all-pervasive ether, undulating invisibly in space, as a carrier of light.

Astrophysicists, on the other hand, now believe that empty space is curved, and that even vacuums are thought to exist in several exotic varieties. It would appear as though what had seemed outrageous concepts yesterday are the scientific ideas of today. The reverse also seems to be true. And concepts regarded as crazy today maybe hailed as profound theories tomorrow.

That being the case, why should not Einstein be wrong.

Cole concedes that Einstein will probably be proved wrong someday. But according to her, he would only be wrong in the sense he himself had proved Newton wrong. For “wrong” is obviously not the appropriate word for it.

Social theories can have shades of grey but scientific knowledge is either black or white. Scientific progress would then mean beginning in ignorance and moving towards final truth, by successive accumulation of correct facts. The history of science can only chronicle past mistakes, and credit the brick-layers for discerning glimpses of the ultimate truth.

And now nobody is considered a better scientist than Einstein, at least in part, because he was right about things in respect of which even Newton had been wrong.

Newton had held that time and space were invariable whereas Einstein proved they were not. But one must not ignore the fact that the so-called wrong ideas of Newton are still used to put artificial satellites into near perfect orbits. Apples and objects still fall and the moon still orbits according to Newton’s formulae.

In fact Newton’s theories still hold good for all events occurring in our daily experience. They break down only at very high velocities approaching the speed of light where relativity takes over or at extremely small dimensions where quantum theory operates.

Quantum mechanics works at very small distances. For example, the physics of molecules, atoms, nuclei and elementary particles can be described within the framework of quantum mechanics. But general theory of relativity describes gravity at large distances.

In a letter to Robert Hooke in 1675, Newton wrote "If I have seen further, it is by standing on the shoulders of giants".

Similarly Einstein proved Newton wrong only in the sense that having stood on the shoulders of a giant like Newton, he had been in a position to see further e.g. what happens to space or time under extraordinary conditions.

Mostly, Einstein proved Newton right since his theories were built on the foundations laid by Newton. Einstein merely improved upon Newton’s ideas and stretched them into a new dimension making them broader, stronger and more refined. But if Newton’s ground had not been solid and firm to begin with, Einstein could not have built a grand new edifice.

Right and wrong are surprisingly misleading ways of describing things in Science.The concept of absolute truth has really no place in science. New ideas merely expand, modify and limit old concepts, but rarely do they demolish them.

An appropriate example is the controversy in respect of light. For ages scientists argued whether the particle theory of Newton or the wave theory of Huygens was correct. Now light has turned out to be both e.g part wave and part particle. Both theories seem to be right to a certain extent.

Phenomena such as interference, and polarisation could be explained only by Huygens only by assuming that light behaved like a wave. On the other hand, Einstein could explain the photoelectric effect only by bringing in the particle concept.

A few astronomers like Sir Fred Hoyle did not believe in the theory of the expanding universe. They put forth the" steady state" theory. According to them, the universe did not have a beginning and it will not end. But they agree with the "Big Bang" theorists that the universe is expanding. Some of the "steady state" theorists hold a quixotic belief that the expansion is only an illusion, caused by changes in the “rulers” used for measurement.

However most astrophysicists now believe that Hoyle is wrong and currently the "Big Bang" theory is considered the best proposition to explain the expanding universe and several other connected phenomena.

Astrophysicists who believe in the "standard model" hold the view that creation commenced with the “Big Bang”, about 13.8 billion years ago. According to the Belgian physicist George Le Maitre, in the beginning all matter in the universe was concentrated in one point in the beginning, and that the universe began when this primeval atom exploded.

Following this "Big Bang" it has been expanding and some day it will cease expanding. This is where the existence of the Higgs boson, postulated by Peter Higgs in 1964 comes in. The importance of the Higgs boson lies in the fact that it explains how the fundamental particles acquired mass, thus vindicating the "standard model".

The Large Hadron collider, beneath Geneva, detected the Higgs Boson on July 4, 2012, 48 years after Higgs had proposed its existence. Higgs was awarded the Nobel prize the very next year.

It is now universally accepted that, in general, modifying a theory in the light of new evidence or discovery does not demolish the old theory. It merely limits its area of relevance or operation.

Once Newton grasped the meaning of the rate of change of momentum he went on to discover differential calculus. Once Maxwell got the correct concept about light, Hertz knew where to look for radio waves. Even the elusive ether was right enough to pave the way for future discoveries. At least it threw up the right questions, for scientist’s to work upon, though most scientists doubt its existence now.

Wrong ideas on the other hand are just plain wrong and unproductive. We know that the earth is round (though not a perfect circle), and not flat. But the difference between a round earth and a flat one is really one of perspective as suggested by Cole. The earth does look flat when you walk around town. You can see the curvature only when you look from a broader perspective, as Columbus did.

Indeed space-time itself begins to look curved, only when your measurements cover a sufficiently large territory. If this is understood, it is easy to realise that quantum mechanics and relativity offer a larger perspective on classical physics, taking it into new and uncharted realms.

Wrong in other words merely means “limited”. It implies that something has been missed, that some part of nature has kept itself hidden beneath the surface. It does not mean that the person who is wrong is misguided.

Each new idea or discovery merely improves upon our early notions. Thus even Einstein was wrong only in the sense that he could not resolve every unanswered riddle or anticipate every possible consequence of his own theories. He could not, any more than Newton could—claim to be all-seeing or all-knowing. In fact truly great scientists are conscious of their own limitations. Towards the close of his tempestuous career Isaac Newton had declared with characteristic humility :

“I do not know what I may appear to the world: but to myself I seem to have been only like a boy playing on the sea shore and diverting myself in now and then finding a smoother pebble or a prettier shell than ordinary whilst the great ocean of truth lay all undiscovered before me"

Similarly Einstein also towards the end of his life was aware that his “Theory of Relativity” had left many phenomena still unexplained. He said

“My religion consists of a humble admiration of the illimitable superior spirit who reveals himself in the slight details we are able to perceive with our frail and feeble minds”.

Before his death, Einstein had been trying to combine gravity and electromagnetism into a single elegant theory. Some aspects of the quantum theory itself had disturbed him rather deeply. The concept of Heisenberg's "Uncertainty theorem" also worried him leading him to observe that “God does not play dice with the universe”. Neils Bohr reportedly told him" Stop telling God what to do.

According to another version Bohr said "God does play dice with the universe but he throws them where we cannot see".

Towards the end of his life Stephen Hawking was also hoping to come out with a "Grand Unified Theory" that will explain all the laws of creation.

Unfortunately, he died before achieving his goal. Therefore the world no doubt needs another Newton or Einstein or Hawking to open up fresh undiscovered paths in Physics. But even such a scientist cannot claim to be completely right, about the fundamental nature of things. He can only add yet one more rung to the ladder, of knowledge to enable us to climb a little higher in the quest for truth—one more torch to lighten up some area of darkness which has hitherto remained hidden.