Explained: All The Different Interpretations Of The ‘Rakhigarhi Study’ 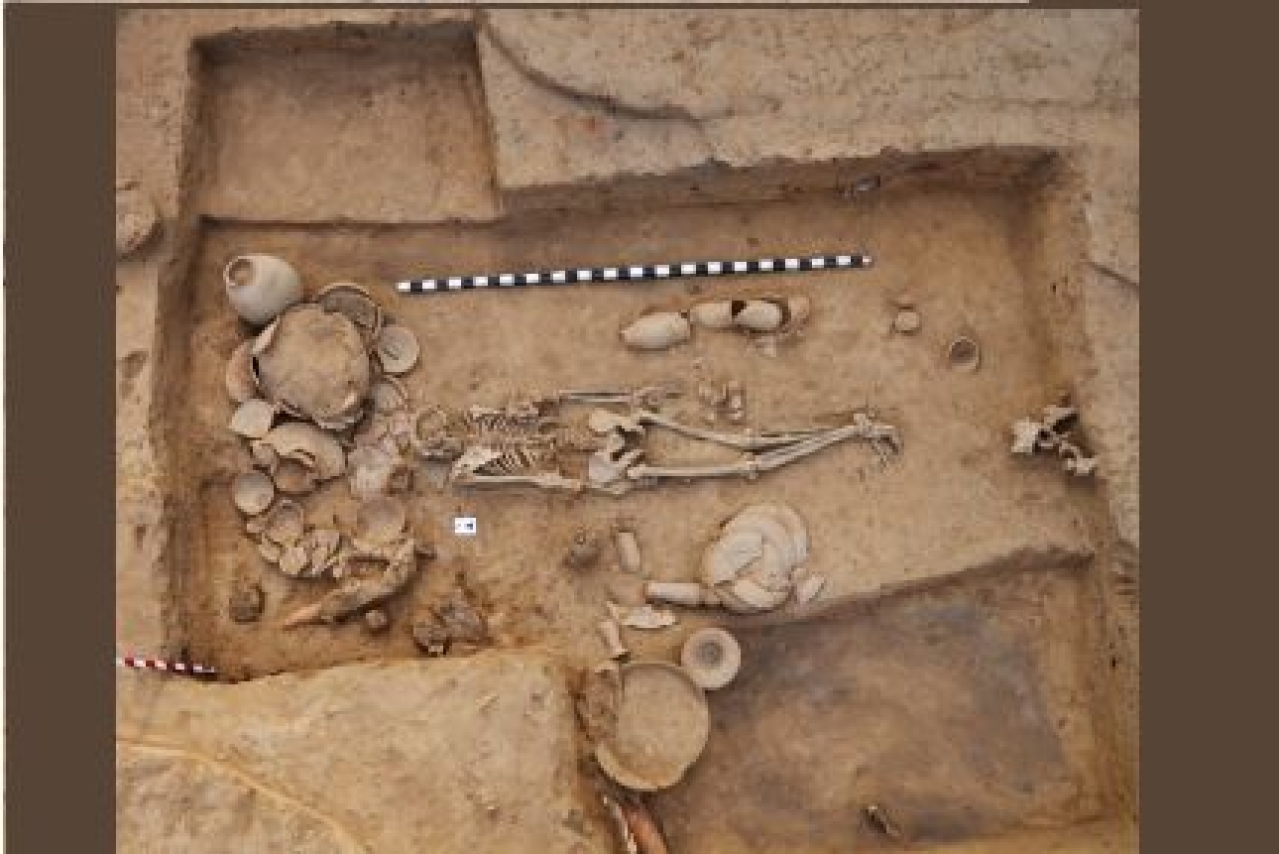 Photograph of the I6113 burial from where the Rakhigarhi DNA sample was obtained. (Source: Cell)

With the much-awaited ancient DNA results of the ‘Rakhigarhi study’ coming in, the mystery and controversy around the entire Aryan invasion/migration debate and the genealogical identity of the Harappan people has deepened.

For example, earlier it was suggested that farming came to ancient India in the proto-Harappan period from neighbouring Iran but now, the evidence suggests it was not so.

Agriculture seems to have evolved independently in India.

“It (Harappan civilization) diverges at a time prior to the advent of farming almost anywhere in the world,” Dr Vagheesh Narasimhan, a postdoctoral fellow in genetics at Harvard Medical School, was quoted by 'LiveScience' as saying.

Dr Vasant Shinde, the lead author of the paper and an archaeologist had stated that the paper had shown “there was no Aryan invasion and no Aryan migration and that all the developments right from the hunting-gathering stage to modern times in South Asia were done by indigenous people.”

There seems to be a divide between archaeologists involved in the study and the geneticists.

While both Vagheesh Narasimhan and David Reich (also of the Harvard Medical School) seem to favour associating a very later-day Steppe influx with the spread of Indo-European language and certain cultural elements — the so-called Aryan invasion/migration model — Shinde is convinced that the study is a complete rejection of the Aryan invasion/migration theory.

Jonathan Mark Kenoyer, an archaeologist involved with Harappan excavation for decades too has cautioned against making generalisations based on the study of DNA from a single person. This is because Harappan sites being cosmopolitan centers of their age, “one person's genetic makeup might not match the rest of the population.”

He further pointed out to LiveScience that, “burial was a less common way of dealing with the dead than cremation” and hence “whatever we do have from cemeteries is not representative of the ancient populations of the Indus cities, but only of one part of one community living in these cities.”

Earlier, Indian archaeologist, R S Bisht, had pointed out in another context that burial was just one of the ways of disposing the dead among the Harappans, probably the mark of one particular community.

Dr Gyaneshwer Chaubey, an eminent geneticist who has studied population genetics with respect to ancient human migrations for over a decade, is also cautious about drawing conclusions with respect to spread of language, etc., from genetic studies.

“The study has made clear certain things like, for example, the origin and agriculture development here was not associated with Iranian input as was previously thought,” he said and pointed out that the study even speaks of gene flow from South Asia and not the other way.

The study has discovered this:

Multiple lines of evidence suggest the genetic similarity of I6113 (the Rakhigarhi burial DNA) to the Indus Periphery Cline individuals is due to gene flow from South Asia rather than in the reverse direction.

So while the mystery seems to deepen at one level, at another level it seems that ancient Indian cultural and technological evolution appears to be more and more indigenous — at least in a proportionate way.

Incidentally, there had been certain attempts in a section of media to describe the findings as as 'upsetting' the 'Hindu nationalist' political discourse. Such politicising of not just ancient DNA studies but almost every genetic study of the Indian population has been a great hindrance to any scientific study done here.

Mainstream Hindutva has never argued that the Aryans were native to India. Instead, it has claimed that there was no race called Aryans. What they have contested is the racial use of the term 'Aryan'.

Hindutva ideologues like Savarkar had argued against any claims of racial or ethnic purity.

The Rakhigarhi DNA findings have opened up an an exciting chapter in understanding ancient populations on the subcontinent. It has brought to light the presence of a Harappan ancestry that is indigenous.