Indic Knowledge Can Open Doors To New Science, But The Academic Left Remains Closed To The Idea 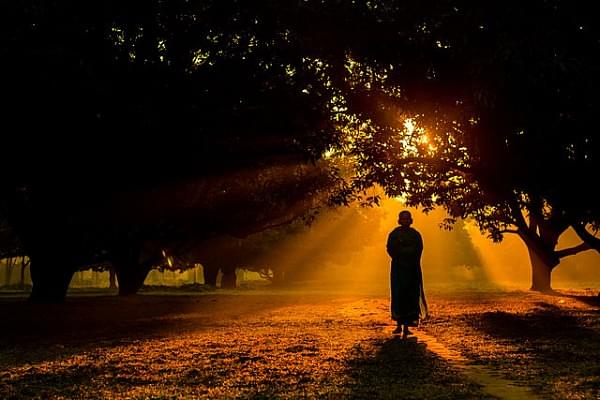 Scientific explorations with ancient frameworks can provide us with new insights and even unintended benefits. (Jubair1985/Wikimedia Commons)

The science magazine Nature recently tweeted about a 2,000-year-old Greek physician who lived in Rome – Galen – who had thought of ageing as a ‘holistic’ process.

Ancient Greek physician Galen thought of ageing holistically, as a lifelong process with a number of stages. https://t.co/Ti09fyP9k1

The tweet linked to a review by writers Stanley M Burstein and Caleb E Finch of Galen’s two volumes titled Hygiene. The term “hygiene” comes from the name of the pagan goddess Hygieia. Burstein and Finch, who consider “the excellent translation” of Ian Johnston as the “best appreciation yet of the classic”, write of Galen’s understanding of ageing thus:

...Hygiene, written around ad 175 and featuring the only surviving classical study of gerontology, framed ageing as a natural process that can be eased or even delayed through preventive measures such as diet. Thus the work, also known as De sanitate tuenda (‘On the preservation of health’), resonates to a startling degree with ideas today, both on care of the elderly (gerokomica in ancient Greek) and on models of ageing. ... As Johnston clarifies, Galen thought of ageing holistically, as a lifelong process with a number of stages, of which three were crucial: the first seven years of life, maturity and old age proper. He recognized that a person’s ageing ‘path’ is highly individual, with a wide range of possible health outcomes at each stage. And he realized the importance of a healthy youth as the basis for a robust old age.

Reading the article, one cannot but wonder about the striking similarity between the Hindu Ayurvedic approach to individual life cycles and that of Galen. While Galen’s work itself got submerged in the dark age of theocratic regimes that arose in the West later, in India the concept of the life cycle of the individual with well-defined stages became part of the socio-spiritual system in India.

The concept of brahmacharya, grihasta, vanaprastha, and sanyasa were seen as age-based life stages on the one hand, and bio-psychologically as shishu, bala, kumara, taruna, yuva, madhya, and vriddha/jara in minute terms and as bala, madhya, and vriddha in broader terms.

This classification again considers two factors as moving the process – swabhava (innate individual nature) and kala (time). While both Greeks and Indians viewed ageing as a kind of disease (from which Galen differed), Hindus viewed ageing as a “natural disease” which were, among others, like thirst and hunger.

Ayurveda also distinguishes between natural ageing (kalaja vriddhavastha) and early onset of ageing on account of lifestyle problems (akalaja vriddhavastha). Combining these with the three doshas, three gunas and the ashramas (stages) in a life cycle and then adapting the whole system to a modern-day context can provide medical sciences with refreshing new solutions for age-related problems.

Historians have written about the possible influence of Indic concepts on Galen and on Dioscorides, who wrote Materia Medica, from which Galen derived quite a few concepts and data. However, even without going into the historical influences, in recovering the holistic dimensions of the pre-Christian Western holism, particularly in medicine, Indic systems play an important role even today. Victoria Pitman, who does research in complementary health studies at the University of Exeter, points out:

A comparison of ideas of holism in the Hippocratic corpus and Ayurveda strengthens the appreciation that the theory and practice of Greek medicine were grounded in an equally comprehensive spiritual–philosophical base. Finally, the fact that such concepts are found in the corpus provides a point of unification for otherwise apparently diverse and disconnected disciplines that goes beyond herbal medicine. ... This study shows that we are in fact inheritors of a common, and deep, source of holism.

“The relationship of classical Greek medicine to contemporary Western herbalism: an exploration of the idea of ‘holism” in Reshaping Herbal Medicine: Knowledge, Education and Professional Culture (Edited by Catherine O’Sulluvian), Elsevier Health Sciences, 2005

Now, consider the scenario in India.

For a long time, the academic left cabal has seen Indian concepts through the framework of “Brahmin versus non-Brahmin” heterodoxy. The very division of the individual life cycle into stages, which has deep connections with a holistic Ayurvedic framework, was seen by Romila Thapar as a ‘Brahminical’ means of containing the threat of ‘rebel’ ascetics.

...the ascetics did not spend all their time isolated in forests or on mountains tops. Some of them returned to their communities and challenged the existing social and religious norms. The brahmanas may have seen this as a danger to their position and they advocated a sequence of in which the life of a man was divided into four stages, called ashramas, refuges. He was first to be a student, then a family-man or householder, then a hermit withdrawn from social life and finally a wandering ascetic.

Such an unscientific approach to the features of Indian culture and society is motivated largely by ideology, which in turn comes from a colonial-Marxist hatred for India. If writers of this kind ruled our education departments unchecked and unquestioned, then how does one really expect our educated classes, academia, and media to have a scientific outlook, leave alone cultural literacy?

The kind of attack that cross-disciplinary scientists have to face when they try to use frameworks from traditional Indic knowledge systems with respect to modern science, as in the case of Ayurgenomics, is visceral and venomous. For example, when in 2014, the Narendra Modi-led National Democratic Alliance (NDA) stated in its manifesto that it would support Ayurgenomics, a left-leaning magazine indulged in such a hatchet job against scientists involved in Ayurgenomics that Dr Mitali Mukerji, a senior principal scientist at the CSIR-Institute of Genomics and Integrative Biology – the woman at the forefront of Ayurgenomic exploration, was made to “plead innocence of its political implications”.

Today, there are studies which reveal “signature microbes” from gut microbiome linked to specific prakritis in specific geographic regions. If our swabhava is linked to both our prakriti and gut microbiome, with dynamic links between the two, then individualistic ageing-cycle-related treatment in Ayurveda may become even more relevant and open up some fantastic possibilities for researchers and solutions for ageing-related problems. Not all such studies need to become successful. But scientific explorations with such frameworks can provide us with new insights and even unintended benefits.

However, the colonial-Marxist stranglehold on our academia and the Hinduphobic media will not even allow such ventures. It is time to break this stranglehold so that we can contribute to human well-being as a civilisation, and as a nation.