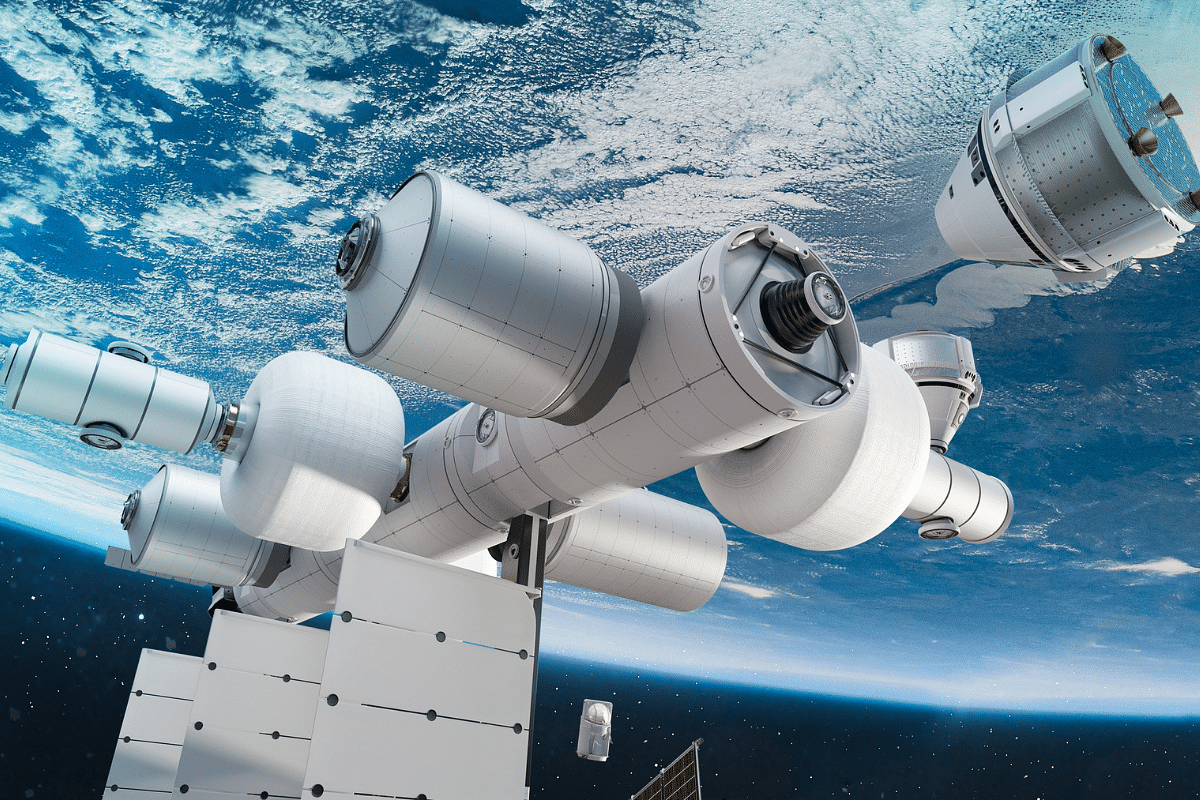 The list of potential successors to the International Space Station is growing.

After kicking off its space tourism business successfully, Jeff Bezos-owned space company Blue Origin has announced plans to launch a commercial space station. Called “Orbital Reef”, the planned station is described as a “mixed use business park” in Earth orbit.

It is envisioned as an urban business park for low-Earth orbit and to be used for purposes ranging from tourism to research and development to commerce.

The outpost, which will assume a 500-kilometre orbit, will queue up to try and become the first-ever crewed private sector platform in space. Axiom Space and Nanoracks have already announced their intentions to launch the world’s first commercial space station.

On Orbital Reef, there will be separate science and habitation zones within a space nearly as big as the International Space Station and will be able to accommodate 10 persons.

The services offered will include space transportation and logistics, space habitation, equipment accommodation, and operations including onboard crew.

According to Sherwood, more than six decades of orbital space flight and habitation work accomplished by NASA and other space agencies has paved the way “for commercial business to take off in this decade” in space.

How to imagine the Orbital Reef? “Think of it as a village, think of it as many different organisations and people in their own parts of Orbital Reef doing their own activities,” Lindy Elkins-Tanton, the vice president of the ASU Interplanetary Initiative and the principal investigator of the Psyche mission, has explained in a promotional video.

The potential beneficiaries of the outpost, according to a statement by Blue Origin primary partner Sierra Space, are “seasoned space agencies, high-tech consortia, sovereign nations without space programs, media and travel companies, funded entrepreneurs and sponsored inventors, and future-minded investors”.

Seeing the Earth from space is a life-changing experience, and our vision is to open access for all. #OrbitalReef is a LEO habitat designed for you. #BusinessoftheFuture https://t.co/9bnvr0dA1s

To develop and launch the space station, Blue Origin will work alongside Sierra Space — a subsidiary of aerospace contractor Sierra Nevada Corporation — and “expert teammates” in the form of Boeing, Redwire Space, Genesis Engineering Solutions, and Arizona State University (ASU).

The reusable heavy-lift New Glenn launch system developed by Blue Origin, besides the utility systems and core modules, will be used in the mission while Sierra Space, whose president is a former NASA astronaut, will supply its Dream Chaser spaceplane and inflatable “LIFE” module.

Boeing will provide its Starliner spacecraft for crew and cargo transportation and a research module. In addition, it will look after operations and maintenance of the station after it has settled down in orbit. The aerospace company has the experience of doing the same currently for the International Space Station.

The single-person spacecraft developed by Genesis Engineering will be used for accessing the outside of the Orbital Reef by space workers and tourists. ASU will lead a global group of universities to support the station with ethics and guidelines for research activity as well as academic needs and public outreach.

Redwire will contribute by way of microgravity research, development, and manufacturing, which, the company hopes, “will transform fields as diverse as communications and biotechnology”.

The company’s roll-out solar arrays, which are already used on the International Space Station, may also power the new proposed station.

Notably, the New Glenn, Starliner, and Dream Chaser, which are said to “provide the backbone of cost-effective transportation” in this effort, are as yet untested.

The New Glenn and Dream Chaser are yet to fly and the Starliner is yet to fly people to orbit. The next couple of years will be enough time to gauge how these technologies shape up.

For all the excitement surrounding Orbital Reef, it is not the only private space station candidate.

Voyager Space, Nanoracks, and Lockheed Martin announced their plans for a commercial space station just days ago. Called Starlab, the planned station is set for a 2027 launch. It will be about a third of the volume of the International Space Station and will be able to house four crew members.

“The basic elements of the Starlab space station include a large inflatable habitat, designed and built by Lockheed Martin, a metallic docking node, a power and propulsion element, a large robotic arm for servicing cargo and payloads, and a state-of-the-art laboratory system to host a comprehensive research, science, and manufacturing capability,” a Nanoracks statement released on 21 October said.

Previously, Axiom Space had announced plans to launch a commercial station. In January 2020, NASA picked Axiom Space to provide at least one habitable commercial module to be attached to the International Space Station in late 2024, as part of promoting commercial opportunities in space.

When it will be time to call it a day for the International Space Station, the Axiom modules on the station will detach and begin operating independently as a free-flying commercial space station.

In May this year, NASA and Axiom Space also signed an order for the first private astronaut mission to the International Space Station, planned for after January 2022. The eight-day private crew visit to the space station on board a SpaceX Crew Dragon is set to mark another step towards achieving a thriving commercial marketplace in low-Earth orbit.

The International Space Station has been serving Earth for over two decades, but it cannot remain up there forever. Already showing signs of ageing, the outpost is set to retire in 2024, with a possible extension stretching its life to 2028. NASA administration Bill Nelson, however, hopes for a couple more years of life beyond even the extended time frame.

In light of the approaching end of service for the International Space Station, NASA is looking for successors. The United States space agency has already invited proposals for commercial space stations — a strong response is said to have emerged with about a dozen proposals coming in.

Through its Commercial LEO Destinations (CLD) project, NASA wants to ensure continued human presence in low-Earth orbit while it goes in pursuit of more deep space projects. In the process, it stands to save $1 billion annually.

“The agency's goal is a low-Earth orbit marketplace where NASA is one of many customers, and the private sector leads the way,” NASA said earlier this year.

The US space agency has talked about a two-phase strategy — forging multiple Space Act Agreements for early concept development of commercial destinations and, next, the purchase of destination services when they become available.

In this scheme of things, the Orbital Reef would be of interest to NASA. In fact, NASA may, according to Blue Origin, even become an “anchor tenant” at Orbital Reef after it goes up.

NASA’s plans aside, the idea of a commercial orbital outpost fits neatly into Jeff Bezos’ grand vision of people “living and working in space”.

Orbital Reef will mark a pretty good step in this direction if it comes to fruition.