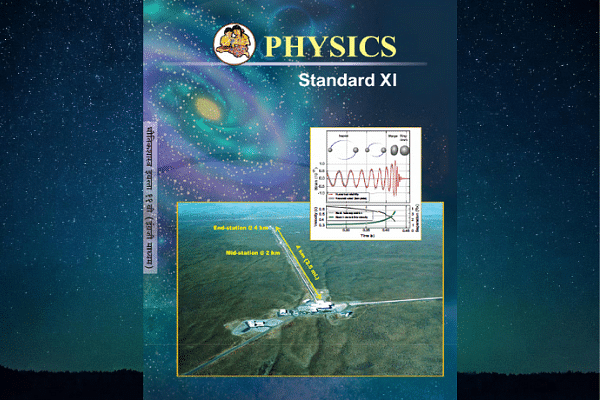 School textbooks come in a variety of forms – some engage and spark curiosity, others make it all about the information.

It's a full spectrum, really.

The front page of the latest edition of the state board’s Class XI physics textbook features a mega-science project of our times.

The cover shows the Laser Interferometer Gravitational-wave Observatory (LIGO) with a snapshot of gravitational waves detected in the event of a black hole merger.

The latest edition of #MaharashtraBoardâs 11th standard #Physics #textbookâs cover page is themed on the detection of #gravitationalWaves by #LIGO!

It's a common refrain in India that textbooks carry outdated subject matter. Featuring real-world contemporary scientific work on the cover of the textbook sets a different example.

Somak Raychaudhury, director of the Inter-University Centre for Astronomy and Astrophysics, tweeted saying: "This is probably the best way to communicate to high school students what kind of facilities would be available for them if they study the subject well."

Explaining its cover, the textbook says: “Since ages, mankind is awed by the sheer scale of the universe and is trying to understand the laws governing the same.

“Today we observe the events in the universe with highly sophisticated instruments and laboratories such as the LIGO project seen on the cover.”

The cover is designed by Vivekanand S Patil.

LIGO is an observatory in the United States of America that hunts for traces of extraordinary cosmic events that happened a long time ago, in the form of gravitational waves.

The idea of gravitational waves originated in Albert Einstein's theory of general relativity.

It remained a prediction for a century until it was confirmed in 2015 by LIGO — gravitational waves were detected from 1.3 billion years ago after two spiralling black holes crashed into each other.

Some 50 different gravitational waves have been detected in the last five years.

Future projects like the Einstein Telescope and Cosmic Explorer promise to help refine our gravitational-wave view of the universe.

India is set to get its own gravitational-wave observatory too, as part of the international LIGO network. Not incidentally, it will be established in Maharashtra, whose school board is behind the textbook.

LIGO-India will be a collaborative effort; several Indian research institutions will work together with LIGO, US, and the international network to catch ripples in the fabric of space and time caused by spectacular events such as the collision of black holes or neutron stars unfolding in the universe.

The planned Indian initiative had received an in-principle nod from the government of India in 2016. Work has been underway since then in the form of identifying the site, acquiring the land, and building the observatory. The Department of Atomic Energy and the Department of Science and Technology are chiefly driving this work, which is expected to be completed by 2025.

Among the research institutions leading this scientific effort are the Inter-University Centre for Astronomy and Astrophysics, Pune; Institute for Plasma Research, Gandhinagar; and Raja Ramanna Centre for Advanced Technology, Indore.

A network of gravitational wave-observatories will expand our sight of the universe and enable us to see things not observable by the more conventional electromagnetic telescope.

While gravity observatories get built here on Earth, gravitational-wave detection in the future will happen even from space (the LISA project) and, if a more adventurous proposal is accepted, the Moon.

Read: Explained: The Idea Of An Observatory On The Moon To Detect Gravitational Waves