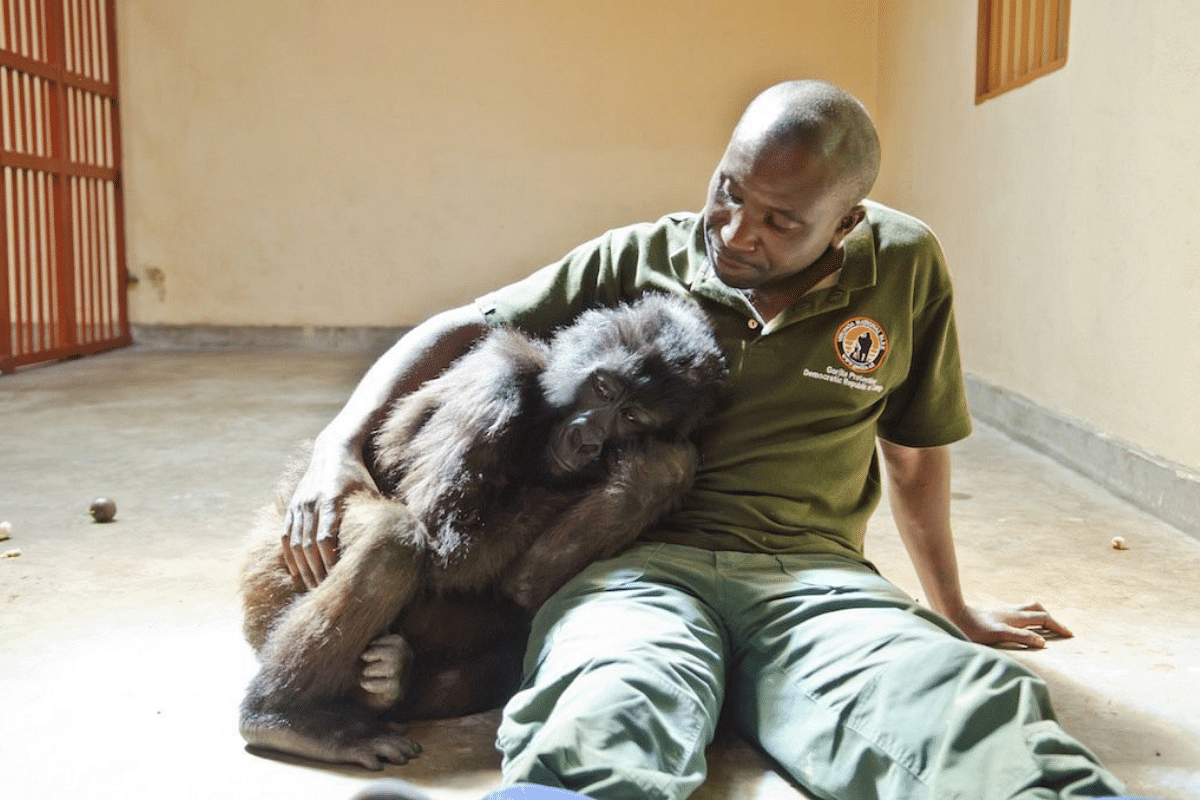 Ndakasi, the mountain gorilla that won hearts online after she posed for a viral selfie taken by a park ranger in 2019, has passed away aged 14.

“It is with heartfelt sadness that Virunga announces the death of beloved orphaned mountain gorilla, Ndakasi, who had been under the care of the Park’s Senkwekwe Center for more than a decade,” Virunga National Park said in a statement.

Succumbing to a prolonged illness, Ndakasi breathed her last on the evening of 26 September in the arms of her caretaker and lifelong companion, Andre Bauma.

A photograph accompanying the statement shared by Virunga, Africa’s oldest national park, shows Ndakasi holding on to Bauma — it’s an emotional throwback to their first meeting.

Bauma met two-month-old Ndakasi in 2007 at a rescue centre in the city of Goma in the Democratic Republic of the Congo. She had been rescued from a site where her mother had been murdered by militia fire.

“All night long, Andre held the baby close to him, keeping her tiny body tightly against his bare chest for warmth and comfort,” the park's statement says.

Ndakasi underwent rehabilitation until, in 2009, she was transferred to the Senkwekwe Center, which was then newly created as a dedicated care facility for orphaned mountain gorillas.

For 11 years, she lived at Senkwekwe peacefully with her caretakers and orphaned gorilla mates, including Ndeze, Maisha, and Matabishi.

Ndakasi’s personality shone through with ease in the many pictures, documentary films, and video shorts in which she has appeared over the years.

People fell in love with Ndakasi especially after she and her mate Ndeze featured in a photograph taken by her caretakers Mathieu and Patrick at Virunga in 2019.

The pictured females were seen standing upright and posing a bit like humans would if they were trying to look cool. (Gorillas don’t have to try.)

“Those gorilla gals are always acting cheeky so this was the perfect shot of their true personalities!”, the caption for the photograph shared by Virunga on 22 April 2019 read.

Ndakasi’s mate in the selfie, Ndeze, too was found amidst a massacre of gorillas — six dead in her case — about one and a half months after the rescue of Ndakasi in 2007. Both lived together at Senkwekwe since 2009.

According to Bauma, Ndakasi “took after her mother, Nyiransekuye, whose name means “someone happy to welcome others.” He adds: “I am proud to have called Ndakasi my friend.”

It was, after all, Bauma who had taught Ndakasi and other orphaned mountain gorillas all the basics — how to eat, how to play, and how to live together.

Bauma described Ndakasi in a recent Virunga video clip as having a “deep sense of curiosity” and knowing “how to explore the environment”.

“We can say that she is the explorer of the Senkwekwe Center,” he said.

Unlike her mate Ndeze, Ndakasi was known to be "aggressive".

Ndakasi’s dearest Bauma has served the cause of nature and wildlife conservation for 22 years, earlier fighting to save elephants and other large mammals against poaching before turning to full-time care of gorillas after the rescue of Ndakasi and Ndeze.

What's heartening is that the rescue, rehabilitation, and revival of Ndakasi has run parallel to that of the species as a whole. According to the park, from 2007, when Ndakasi was taken into care, to the present day, mountain gorilla numbers have increased from 720 to 1,063 — a rise of roughly 47 per cent.

Around one-third of the world’s mountain gorillas live in Virunga National Park. It is, in fact, the only place on the planet to have three types of great apes — the mountain gorilla, eastern lowland gorilla, and eastern chimpanzee.

The park was established in 1925, originally as Albert National Park, primarily to protect the mountain gorillas living in the forests of the Virunga Massif.

Among mammals, the 7,800 square-kilometre park most prominently features elephants, hippopotamuses, and lions, besides mountain gorillas.

Situated in the east of the Democratic Republic of Congo, Virunga is a UNESCO World Heritage Site known for its exceptional wildlife and habitats. A dedicated team of 689 rangers serves this iconic park.