‘Our Planet’: Netflix’s Documentary Is A Plea To Contemporary Human Civilisation 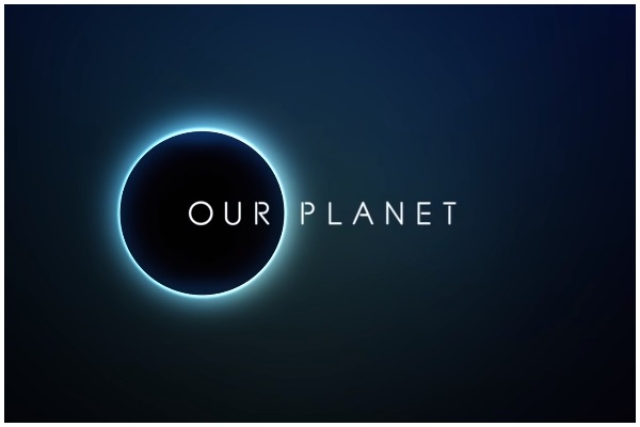 Logo of the show

Even a fair dose of Discovery Channel would not keep you from being thrilled to the hilt while watching Our Planet. The eight-part show on Netflix is produced and edited masterfully.Narrated by the broadcasting great David Attenborough, the show is gripping as if it is a thriller like Ocean’s Eleven (pun intended).

After an introductory episode, from ants to apes, the series explores different types of ecosystems namely, frozen worlds, jungles, freshwater, desert, the high seas and living beings that thrive in symbiosis.

It starts with a scene of planktons brought through the Humboldt Current off the coast of Peru. Planktons attract anchovies that are then rounded up by dolphins from below and the cormorants and boobies from above. The fish are preyed upon like in the last scene of The Godfather. The interconnectedness of our ecosystems becomes so clear in a mere 15 minutes.

It is a chronicle of the delicate and beautiful balance of life. Phytoplanktons in the ocean breathe to create storms that irrigate rivers that fill floodplains. The desert enriches the sea, and the sea the desert. The melting polar ice caps spoil the oceanic currents, disturbing ecosystems thousands of kilometers away.

The elaborate rituals of manikin birds, the parade of grass cutter ants, the lonely treks polar bears, and dives of giant humpback whales make for pulsating watching. The most gut-wrenching scene is the one where Walruses off the coast of Russia climb up cliffs, unnaturally (the ice-floats in which they live are gone and they are forced to live on rocks), only to jump down in an act of suicide. The controversial scene kicks us in the gut and offers deep pathos for animals that are affected by the disdainful acts of humans.

The human population has doubled in the last 50 years. The show squarely places the responsibility of the degradation and climate change on human beings. No words are minced. As Attenborough puts in glumly over breaking polar glaciers, “75 million tonnes break free in 25 minutes”. The bewitchingly beautiful scenes that were shown are already gone, or are on the verge of being gone forever.

The series indicts over-fishing, industrial agriculture, and carbon use. Massive demand for palm oil production is leading to unprecedented deforestation. Over the past 50 years, half of Borneo’s jungle has disappeared, and the surrounding islands have lost 90 per cent of their plant life. A dammed river creates water shortage in East Africa, forcing desperate elephants to dig wells to slake the thirst of their little calves. The collapse of melting glaciers makes us feel as if we have missed the bus to prevent an environmental catastrophe.

India is mentioned twice in the show. First time, it gets praise for our efforts to protect the tiger even under difficult circumstances. In the second instance, the beautiful aerial dance of the great hornbills is shown as a part of the biosphere of the Western Ghats.

The recent flooding disaster in Kerala gave us a view of how avaricious and apathetic officials gave construction and quarrying approvals without any concern for the ecology. The Gadgil Committee report faced so much fury from politicians and the Church, which claimed a conspiracy against Christians of Wayand. Sadly, Wayanad was one of the worst affected by the recent floods. In neighbouring Malappuram district, the whole village of Kavalappara was destroyed. At least 46 people perished.

Of Prime Minister Modi’s speeches, the deeper and philosophical strains are evident when he speaks about the environment.

His remarks on “World Environment Day” over the years bring out the traditions of the Hindu way of life that is in sync with and respectful of the environment. On the occasion on him being awarded the “Champion of the Earth” award in 2018, he said,

The natural symbiosis between Hindu practices and the environment that sees God in the nature and celebrates its festivals based on natural phenomenon could not have been explained better.

Prime Minister Modi’s appearance in the Bear Grylls’ show once again showed his thoughts and commitment to environment protection. He has announced war against single-use plastic. From 2 October, it is going to be pursued in mission mode. Travel to any place in India, the ugly spectre of floating plastic is an unavoidable eye-sore. Even in places that are surreal, our people quite infuriatingly, do not hesitate to throw a chips packet or a chocolate wrapper.

With only 2.4 per cent of the world’s land area, India supports 7 per cent of the recorded species diversity. At the same time, India supports nearly 18 per cent of human population. According to the UNEP Gap Report, India is also on track to meet its Copenhagen Pledge to reduce the emissions intensity of its Gross Domestic Product (GDP) by at least 20 per cent over 2005 levels, by 2020. Our tree and forest cover has also increased by 1 per cent in the last two years. But it is important to put stringent laws into place to prevent cavalier littering.

Referring to tiger conservation in his recent 'Mann ki Baat', the Prime Minister said: “Whenever we talk about nature and wildlife, we only talk about conservation. But now we have to move beyond conservation and think about compassion. Our scriptures have provided guidance on the issue.” We should take inspiration from his words and our Indian ethos should be a guide to the world on living in harmony with the environment.

Our Planet repeatedly speaks about the innate resilience of nature to give a message of hope. The series ends with the uplifting scenes of Chernobyl. Just three decades after the nuclear disaster, it is now a thriving ecological zone with flora and fauna reoccupying the zone that is still contaminated. Wild Przewlaski horses grazing next to abandoned buildings give us hope that we can still salvage the planet.

“In one human lifetime,” says Attenborough in the opening scene, “wildlife populations have fallen by an average of 60 per cent. The stability of nature can no longer be taken for granted.” The fragile nature of our planet and how human action is threatening many species towards extinction is brought about poignantly.

Our Planet should be made a compulsory watch for schoolchildren, college graduates, office goers, policy-makers and, in fact, everybody. It is a passionate plea that compels viewers to consider their own roles in the continuing devastation of the Earth’s diversity and natural resources. The narrator says, “What we do in the next 20 years will determine the future for all life on Earth.” Moral suasion cannot be stronger than this.