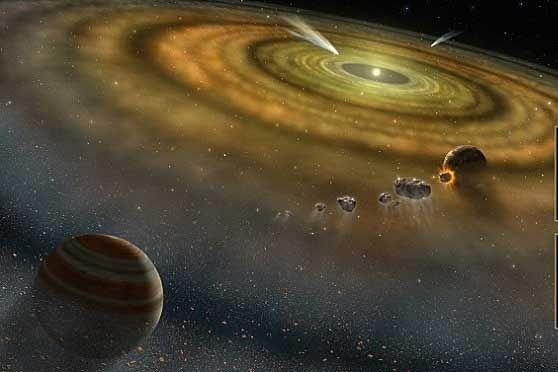 An artist's impression of the formation of the solar system (NASA)

It was a wish for a form of carbon — graphene.

Graphene is quite an interesting form of carbon. Its thickness is atomic — literally. It can be of just one atom to 10-atom thickness. So, it is almost the most perfect two-dimensional sheet found in nature. At the same time, it is very strong — stronger than diamond for the same density.

It is also an enigmatic form of carbon. It is a honeycomb-like, almost-perfect two-dimensional arrangement of carbon atoms stacked in ways that forms graphite.

Hypothesised 80 years ago, it was only in 2004 that these carbon forms were isolated in the lab. Theoretical predictions of graphene in planetary nebulae made earlier have been proved right by astronomical observations later.

Meteorites are rocks that fall into the earth from the deep cold of the mysterious space, and carry the tell-tale signs of their origin.

Of these, the Allende meteorites are quite a class in themselves for scientists. They represent the oldest rocks formed out of the emissions spit out by the harshest imaginable formative processes of the nebula that would later become the sun and the planets.

Ejected out and moving around the sun and planets, the meteor was born before the early evolution of the solar system.

They entered the Earth’s atmosphere and fell into Earth as a fireball in 1969 into a sleepy Mexican village Pueblito de Allende, hence the name Allende meteorite.

It went on to become the most widely studied meteorite, when it became clear that it has its origins in the nebular pre-planetary stage of the solar system.

It is in this meteor, and another meteorite that was recovered from the Antarctica called Que 94366, which too has been considered as of nebular origin, that Giri and his colleagues had been searching for graphene.

Dr Giri has a long and an exciting story to tell that begins long before he was even born. It starts with another giant of astrophysics from Maharashtra, Jayant Vishnu Narlikar, who is revered internationally.

During the early decades of modern cosmology, there were two strong contenders for the theory of the origin of the universe — the Big Bang and Steady State theories.

The discovery of cosmic background radiation or cosmic microwave background (CMB) seemed to favour the Big-Bang theory. As after the Big Bang, the universe expands — it cools. The CMB was the leftover heat from the Big-Bang which permeates the entire universe, so goes the argument, which is now accepted as the standard explanation in cosmology.

But Narlikar and his guru Sir Fred Hoyle were vociferously against the Big Bang theory. In fact, it was Fred Hoyle who coined the term Big Bang in jest to poke fun at the point origin theory. They favoured the mathematically more appealing Steady State cosmology. So how does one explain CMB without Big Bang?

Dr Narlikar, his colleague, Sri Lankan scientist Chandra Wickramasinghe and Hoyle, proposed the presence of a material "optically thick at millimetre wavelengths but relatively transparent at other wavelengths" which they proposed would act as a kind of discrete black body emitting the CMB.

They proposed that this material, "uniformly embedded in intergalactic space" would be "in the form of slender whiskers of lengths in the range 0.1-1.0 mm and radii of the order of 0.1 micrometre".

Even as Steady State theory lost out to Big Bang among the cosmologists and astrophysicists, and also in the textbooks, the graphite-whiskers as proposed by Narlikar would not fade away.

They are now considered as possible candidates to explain the phenomenon termed high-red shifts of supernovae — called Type 1a supernovae. These supernovae belong to one of the brightest species of astronomical objects.

They are so bright that they are used as cosmological candles to measure the distances of cosmological scales. The brighter the supernovae, the closer they are. The dimmer they are, the farther they have receded, consistent with the expanding universe.

In the 1990s, astronomers observed that some of the supernovae are far dimmer and that they seemed to have been pushed further than predicted by the standard theory of cosmic expansions. This expansion was explained by dark energy.

However, there could be another explanation than the mysterious dark energy.

Andrew Steele and Marc Fries of the Carnegie Institution's Geophysical Laboratory, who are also co-authors of the present discovery of graphene in two different meteorites, discovered graphite in very ancient meteorites.

According to them, these components had their origins in the processes of pre-planetary proto-solar nebular disk. From here there could have been emissions into intergalactic space of graphite whiskers.

Similarly, they can also be from the supernova. Explains Dr Giri:

Steele and Fries published the first material evidence of extraterrestrial graphite whisker similar to the CMB-causing material, although the prior was not a product of supernova. Likewise, intergalactic graphene too may perhaps exist. After all, rolling up a two-dimensional graphene, like a paper, can form a graphite whisker.

Then their significant presence in intergalactic space could explain the redshift of Type-I Supernova without having to invoke the dark matter.

That is quite a story of Occam’s Razor through the whiskers of graphite.

Dr Giri was then working in the Earth Life Science Institute (ELSI), Tokyo, Institute of Technology in Japan. If graphite whiskers were present, then graphene too should be present in the meteorites, reasoned Giri.

He spoke with Fries and Steele who are his colleagues. He decided to use confocal Raman Imaging Spectroscopy. They studied the same area called calcium-aluminum-rich inclusions or CAIs. These are estimated to have been formed almost simultaneously when the nebular proto-solar disc was forming the very first solid states of matter in what would become our solar system.

In other words, what Dr Giri and his colleagues have discovered in the meteorites are the very first specimens of graphene being forged in the proto-solar furnace of our star family. The study is being published in the forthcoming issue of Planetary and Space Science.

When comparing the Raman spectra for pure synthesised graphene and the graphene found in the meteorite, Giri et al found "discernible D bands" which are telltale signs of defect-ridden edges, dislocations, cracks etc. along with curving, folding and twisting.

These show the path of the natural formation processes of graphene at the orbital level. This means we will be able to understand more about the natural processes through which the space-borne graphene was formed, and also the kinds of processes that were taking place when a star was being born and giving birth to a solar system with planets.

The fact that they have discovered graphene in two different types of meteorites that were formed together during the birth of our solar system, but were then subsequently separated and went through divergent trajectories, shows that the graphene should have been most probably of proto-solar origin.

Dr Giri explains the significance of the discovery in the context of the study of origin of life as well. Graphene is only one of the various allotropes of carbon that we find not only in meteorites but also in asteroids, comets etc. They have been constantly bombarding the earth and other planets and satellites as well.

Such solid-state nebula-synthesized carbon allotropes could have played a vital role in planet formation in our solar system. They may also have been crucial for Carbon-Hydrogen-Oxygen-Nitrogen based prebiotic chemistry in a period subsequent to the formation of Earth and prior to the origin of life.

In other words, this can throw light onto the very early origin of prebiotic forms which would have subsequently evolved into what we call today life.

But it is not pure science questions of origin and cosmology alone, which makes this discovery important. This means that graphene forged during the very early days of the solar system formation may also be present in significant quantities in space.

The discovery hints at the presence of graphene in the minerals on carbonaceous asteroids, comets and on the Moon. Their potential presence on these bodies can be confirmed via sample-return space missions. And if detected, the sample-return missions could be followed by prospection and in situ resource extraction and utilization (ISRU) space missions.

So what we have here is a discovery that is significant both for pure science, for the questions of origin of the solar system, and perhaps even origin of life, and also techno-economic future as graphene, an important component in many cutting-edge technologies, may well be mined in the space objects of solar system itself.