The Role Of Imagery In Science 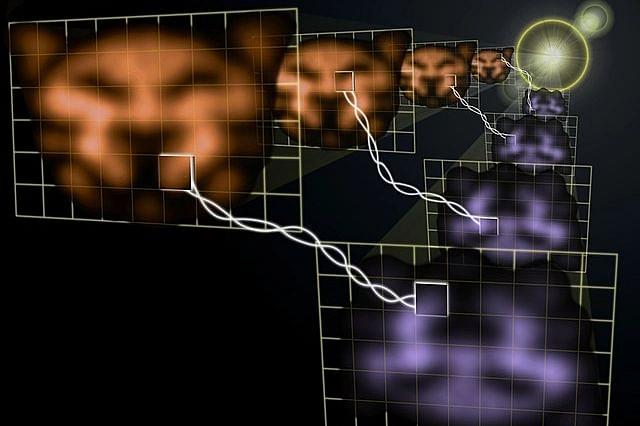 A Hair perhaps divides the False and True; Yes; and a single Alif were the clue — Could you but find it — to the Treasure-house, And peradventure to The Master too

The great Danish Physicist Neils Bohr once wrote, "when it comes to atoms, language can be used only as in poetry". The poet, too, is not nearly concerned with describing facts as with creating images.

While discussing the question of the choice of appropriate language or imagery to describe various scientific phenomena, K C Cole, the eminent science writer, observes that science involves looking at things which we can never see: and not only quarks and quasars but also 'light waves', 'charged particles', 'magnetic fields', 'gravitational forces', 'quantum jumps', and 'electron orbits'.

None of these phenomena is literally what the words or phrases mean. Light waves, for example, do not undulate through empty space in the same way that water waves ripple over the surface of a still lake; a field is not like a hay meadow but rather a mathematical description of the direction and strength of a force; an electron does not actually jump from one quantum state to another nor does it literally travel around the atomic nucleus in orbits.

In fact, the words that we use are metaphors, fashioned from familiar images and nurtured with imagination. When a physicist says 'an electron is like a particle', he is making a metaphorical comparison like the poet who says 'love is like a rose'. In both images, a concrete object, a rose or a particle is used to illuminate an abstract idea, love, or electron.

Over the centuries, the metaphors of science have taken a multitude of forms.

The images we use to describe both the unseeable subjects of science and the unseen future are necessarily fashioned from the 'seeable' world of our everyday experience. And there is the rub.

We do not experience the very large or the very small, the invisible forces and mathematical fields, the curvature of space, the effect of Black holes or the dilation of time. Events which cannot be seen or experienced in our mundane world are drawn only from the familiar world we experience every day, and this is where one encounters difficulties. After all, we do not experience many of the phenomena of nature, e.g. the invisible forces and powerful fields, as explained above.

It is not possible to conceive of the unknown in terms of the known; the landscape of the unfamiliar gets filled in mostly with familiar images, but to some extent, this is desirable because even approximate mental models can prove to be useful. Even Nobel Laureate Richard Feynman once remarked that everything we know is only some kind of approximation and, therefore, things must be learned only to be unlearned again or more likely 'corrected'.

Someone may, of course, be tempted to ask why we should bother to grope for an appropriate imagery at all if our imagery models are only approximations. Why not simply describe all physical phenomena in the language of precise mathematics?

After all, even the best scaffold­ings, the best images eventually get brushed aside. For example, Einstein's relativity eliminated the necessity of thinking about a luminiferous ether; the Bohr atom modified Rutherford's miniature planetary model by combining it with a musical image of standing waves. Therefore, one physicist is of the view that it is not correct to introduce people to the atomic theory by letting them think in terms of electrons in orbit around a nucleus like planets go around a Sun. But it must be remembered that most great physicists too began their exploration of the nature of the atom on the basis of this very same imagery. Only much later did they bring in the concept of quantum states. The orbits served the purpose of being a sort of framework that helped physicists get a foothold while searching for a deeper understanding, a ladder to the next stage. This seems to be necessary for making progress in science.

Thus, even though some scientists have expressed the opinion that models are useless and are not necessary, there is, as we have seen, evidence to show that they do prove useful to begin with when embarking on a journey in search of truth. It is said that Einstein grasped the implications of relativity by imagining people going up in elevators and beaming light back and forth between rocket ships. He got the original idea in that manner, but he formed elegant equations subsequently to explain the concept. Einstein did his best work when he was working with pictures in his mental frame.

We visualise because somehow 'seeing' is inextricably linked with our notion of understanding. When someone says 'I cannot see it', he is trying to say that he does not understand it. According to Feynman, Einstein was less successful in his later years because he switched to a different kind of thinking, a guessing at mathematical forms.

Thus, visualising does help physicists think considerably about the mysterious. Nature is very often mysterious only because of its complex ways. American physicist Goldberger is of the view that it is difficult to conceive of the fact that a chunk of ordinary material can contain 10 raised to the power of 23 atoms. Even if you have a computer that can deal with so many interactions, it would not be possible for you to imagine that staggering mathematical figure. Simi­larly the vast immensities of astronomical space and geological time are beyond human comprehension. Hence the necessity of hav­ing models, imagery, and analogies.

At other times, Nature is mysterious and complex be­cause it is so far removed from our conceptions of reality. Trying to visualise the universe before the beginning of time or beyond the bound­aries of space confronts us literally with the unimaginable. We may be able to think about when the 'Big Bang' took place, but we find it difficult to conceive of how exactly it did take place and what precisely happened.

Feynman understood the importance of imagery better than many other physicists despite his insistence that some things can be understood only through the language of mathematics. Feynman was, after all, a master visualiser. The Feynman diagrams are a language for visualising complex subatomic events in a collection of simpler ones. Even he had been trying to unravel the mystery of the peculiar force that binds quarks together and, in this task, also he had been approaching the problem visually, having found that by following solely the mathemati­cal approach for many years, he had not been able to make any headway. So, he was searching for some descriptive imagery because he had a special talent for that and also began to believe that such an approach may yield positive results.

Imagery is the foundation on which the edifice of scientific discovery is raised. In a similar way, the subatomic world of quantum mechanics is full of puzzles, riddles and paradoxes. One of the peculiar things about quantum me­chanics is that it deals with things we cannot visualise with our limited imagination. Almost everything in science is beyond our realm of experience—like the planets going round the Sun. But if you reduce the size to a laboratory model, then you can visualise the solar system.

However, we cannot visualise quantum mechanics. Thus, our imagination has serious limita­tion.

This is precisely the reason why "complimentarily" is such a powerful and useful concept in Physics. If two ideas are conflictive, it is possible and desirable to use the appropriate one without excluding the other one altogether. If light is not really a wave in the sense of a water wave or a particle, in the usual sense we understand the word, then it can be thought of as having the properties of both. This is why modern science regards both Newton, who regarded light as particle and Huygens, who regarded light as wave, as having been right in their views of the nature of light.

Classical physicists explained many phenomena such as interference, polarisation etc., by treating light as a wave. On the other hand, Einstein explained the photoelectric effect by regarding light as a particle. We can regard electricity either as a force field or as an exchange of particles and be correct either way. If the image appears to be appropriate, we would be justified in using it as long as we remember its limits.

Sometimes, however, the search for imagery in science seems to go too far.

Many scientists feel uneasy about the terms applied to subatomic particles, including "quarks", which was chosen from a line in James Joyce's Finnegan's Wake "Three quarks for Muster Mark!" The subatomic world is teeming with strange species of particles, having oddly familiar names. 'strange' is one of them. Yet particles 'strange' or 'charmed' or 'variously coloured' or 'flavoured' are not in any way, particularly unusual or pleasant or green or good tasting.

Feynman dismisses the words charmed, coloured, flavoured, strange etc., as bad terminology. The phrases "Big Bang" and "Virtual Particle" are also not appreciated by many physicists.

It, therefore, seems that conceiving of what we are not able to see requires complementary ways of observing nature, words and images on the one hand, and numbers and logic on the other. Science, like a comprehensive book, reveals itself con­tents both in text and pictures. Coming to models, anyone would be useful as long as it serves the purpose. But one must know when to discard a particular model and search for another to explain observed facts. Such an attitude requires amazing insight because a model, after all, gives only a picture of reality as currently observed. Thus, though scaffolding is adequate for building and remodelling, it is necessary to realise that it is only a ladder which has a limited purpose of enabling you to reach the goal.

The power of pure thought, as well as imagery in science, is astonishing, worthy of our highest admiration. Positrons and mesons were discovered "mathematically" long before they were isolated in the laboratory. Research in science is a harmonious blend of beautiful 'imagery' and 'pure reasoning.' They are both necessary for reaching the goal. Each plays a different role and requires a unique set of skills, but as long as they are tuned to each other, the harmony is fine. The result is a grand symphony.