What The NASA Administrator Said About UFOs Recently; And Why Exactly Was Pentagon Talking To A Punk Rocker About Them? 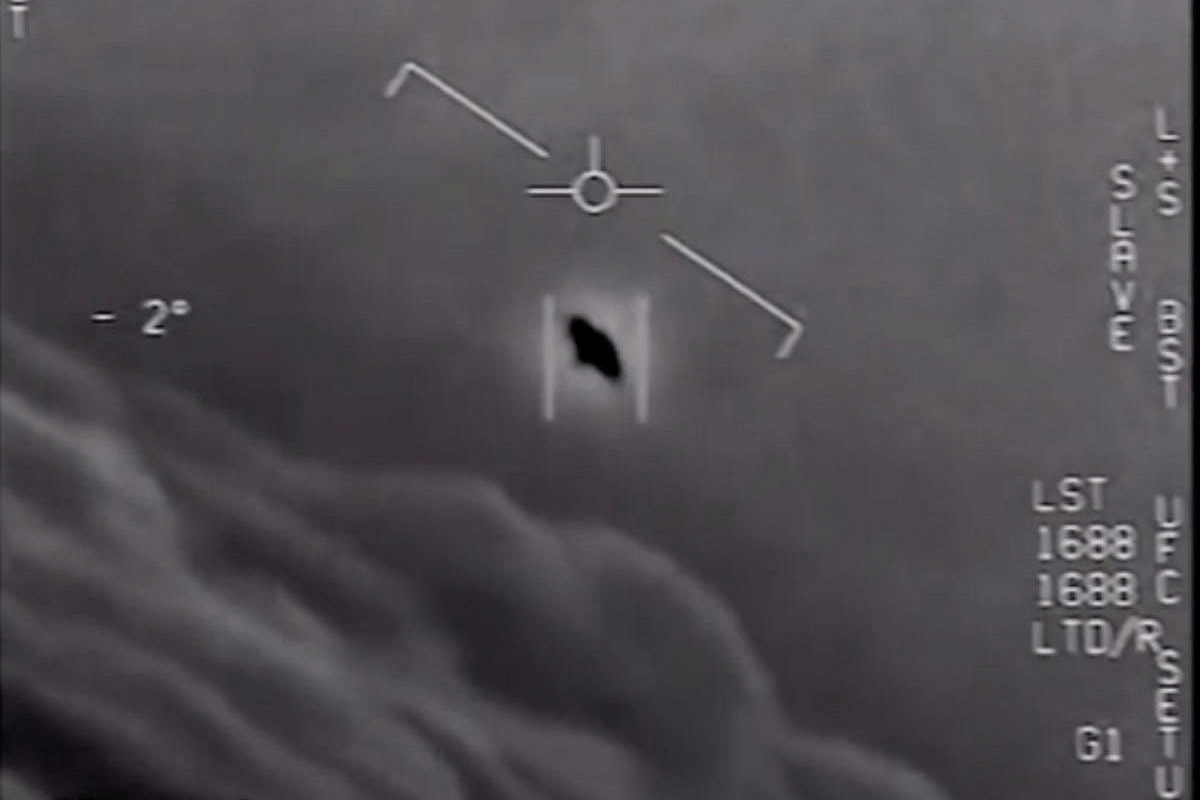 From the UFO video released by the Pentagon in 2020

Any discussion of extraterrestrial life — specifically the idea that it might possibly exist — generally rests on the foundational fact that there are billions of worlds outside of this speck of a solar system where we live and die.

There are roughly 200 sextillion (billion trillion) stars in the universe. Some of them have orbiting planets, just as the Sun has eight planets going around it in our solar system, while others don’t. In our galaxy, the Milky Way, there is said to be about one exoplanet — a planet that orbits a star other than the Sun — per star.

Expand this estimate to include the entire universe and the planet numbers become unfathomable to the human mind; but, also, the possibility of extraterrestrial life residing on at least some, even if it’s just one or a handful, of these planets becomes that much more conceivable.

None other than the chief of the American space agency National Aeronautics and Space Administration (NASA), Bill Nelson, has followed this line of reasoning to suggest that “it’s something”.

In a recent conversation with Larry Sabato, director of the University of Virginia Center for Politics, Nelson said: “My personal opinion is that the universe is so big — and now there are even theories that there might be other universes — and if that’s the case, who am I to say that planet Earth is the only location of a life form that is civilised and organised like ours?”

Many an eyebrow was raised at the end of April last year when the United States (US) Department of Defense officially released three short videos, titled FLIR, GOFAST, and GIMBA, showing "unidentified aerial phenomena''.

It wasn’t the first public acknowledgement of these videos — that came a year earlier, in September 2019, when the US Navy acknowledged footage showing UFOs, short for “unidentified flying objects”, hurtling through the air.

Two of the three videos, both filmed in 2015, feature audio from US fighter pilots trying to wrap their heads around what they are seeing. "Look at that thing, dude!", one pilot can be heard saying in amazement, as the rapidly flying objects are recorded by infrared cameras.

Despite this acknowledgement in 2019, the Pentagon released the footage officially in April 2021. According to Pentagon spokesperson Sue Gough, it was to "clear up any misconceptions by the public on whether or not the footage that has been circulating was real…”

If the precursor to the official Pentagon release was the US Navy acknowledgement, the footage actually entered the public domain much earlier — and from what would be perceived as a rather strange source.

A private company called “To The Stars Academy of Arts & Sciences” — co-founded by musician and former lead singer-guitarist of the American rock band Blink-182, Tom DeLonge — was the first to release these Navy videos between December 2017 and March 2018.

DeLonge exited Blink-182 and started to look more deeply into UFO research. According to a report in Rolling Stone, he contributed to uncovering information about unidentified aerial phenomena or UAP — the Pentagon’s term of choice for UFO — as well as the 2017 UFO programme that was kept under the wraps until then.

“I can’t believe we pulled this off. It’s a big deal, and so much more is coming. I think people need to buckle up,” DeLonge told the American monthly magazine that covers music, popular culture, and politics, in 2020.

This has been an ostensibly strange part of the UFO reveal over the last five years. The co-founder of Ars Technica, a website based around science and technology coverage, Jon Stokes asked recently in a tweet: “why were high-lvl Pentagon brass & Podesta secretly talking to a former Blink 182 bandmember about UFOs?”

Podesta was the White House Chief of Staff to US President Bill Clinton from 1998 to 2001 and Counselor to US President Barack Obama from 2014 to 2015. Thereafter, he served as the chairman of Hillary Clinton’s 2016 presidential campaign.

One of the emails from Mitchell to Podesta in 2014 requested a conversation with Podesta and Obama “regarding the next steps in extraterrestrial disclosure for the benefit of our country and our planet”.

“Five decades of UFO information have dramatically shifted the public awareness of an extraterrestrial presence,” Mitchell’s email said, adding that despite the shift, the US government was “still operating from outdated beliefs and policies”.

One of the three “disclosure issues” Mitchell listed in the email was “galactic travel and research undertaken as an advanced species aware of the extraterrestrial presence, not as uninformed explorers who revert to colonialism and destruction”.

DeLonge too was in on such conversations, especially with Podesta.

The musician's curiosity about the paranormal arose when he was in seventh grade. That interest only grew over time. Speaking to the host George Knapp of the American radio programme Coast to Coast AM in 2011, DeLonge said he had bought a computer in the mid-1990s “specifically to go on the Internet and research UFOs”, right after his band had signed a record deal.

There has been no looking back for him. He launched "To The Stars Academy of Arts & Science" in 2017 along with a former officer of the Central Intelligence Agency (CIA). The work involved investigating UFO reports and sightings.

Two years later, To The Stars signed a “Cooperative Research and Development Agreement (CRADA)” with the US Army to explore advanced technology development. To The Stars already has in their ranks top former officials from the Pentagon, CIA, Department of Defense, and Lockheed Martin Skunkworks.

Thus, Stokes asks the question: “Why was anyone in our government talking to this dude about UFOs? Why were so many credentialed people backing him?”

With todayâs events and articles on my and @TTSAcademyâs efforts to get the US Gov to start the grand conversation, I want to thank every share holder at To The Stars for believing in us. Next, we plan on pursuing the technology, finding more answers and telling the stories.

In 2017, DeLonge said, on the Joe Rogan podcast, “What people have to realise is, you know, the UFO phenomenon isn’t a phenomenon. The universe is f***** gigantic, and there’s life everywhere, every f***** where, and there’s a lot of life that’s way more advanced than we are.”

He added that his company was going to build an “electromagnetic craft” to traverse large distances in space that “other civilisations have too”.

DeLonge is said to have been actively helping uncover information about unidentified aerial phenomena. It began with the release in 2017 of never-before-seen footage. The New York Times got a hold of the footage too and it formed the basis of a report published in December that year, which also revealed that the Pentagon was secretly studying UFOs for years.

About a couple of years later, in September 2019, the footage received official US Navy acknowledgement. And if that wasn’t enough, a year after that, the Pentagon released the same three videos of unidentified aerial phenomena as a form of acknowledging it.

Soon enough, the US Department of Defense announced the creation of a task force, called the Unidentified Aerial Phenomena Task Force, to look into the "nature and origins" of these unidentified phenomena and the potential threat posed by them.

In December last year, US Congress asked the task force to submit a report on what is known about UAPs. On 25 June this year, the report was released. The unclassified version was made available to the public.

The report considered UFO reporting (144 cases) by the US military and the intelligence community between 2004 and 2021. “Most of the UAP reported probably do represent physical objects given that a majority of UAP were registered across multiple sensors, to include radar, infrared, electro-optical, weapon seekers, and visual observation,” the report said.

In some cases, “unusual flight characteristics” were observed, but the report didn’t rule out “sensor errors, spoofing, or observer misperception” and called for “additional rigorous analysis”. Suffice to say, uncertainty remains over the nature and origins of these reported UFOs, although one was attributed to an ordinary Earthly cause — “a large, deflating balloon” — with high confidence.

The task force believes that if and when these cases are resolved, they will fall into one of five potential categories: airborne clutter (birds, balloons, unmanned aerial vehicles), natural atmospheric phenomena (ice crystals, moisture, thermal fluctuations), USG or industry developmental programmes (classified programmes by US entities), foreign adversary systems (deployed by another nation like China or Russia), and a catchall “other” bin (not sure).

If a case of extraterrestrial life were to emerge, the “other” bin would be where it would be filed.

It needs to be said here, though, that the astronomy community, with their electromagnetic eyes turned to the skies at all times, are in a pretty good place to spot extraterrestrial activity if it were to occur.

However, despite decades-long efforts, there has been no evidence of extraterrestrial life so far.

At the risk of belabouring the Pentagon’s point, there is a need for greater and higher quality data. Thankfully, science sets the bar high for what is legitimate and what is not — that will prevent unwarranted leaps from flights of fancy to reality.

But in the present case of UFOs, even an openness to the idea of investigating them is a small victory — since often merely giving the idea a casual ear can earn one an unflattering label.

NASA administrator Nelson, though, is serious about looking into the matter of UFOs and extraterrestrial life. Earlier this year, he told CNN's Rachel Crane: “Now that I'm here at NASA, I've turned to our scientists and I've said, 'Would you, looking at it from a scientific standpoint, see if you can determine [what these objects are], so that we can have a better idea?’”

He said we don’t know what it (the unidentified objects) is, but “the bottom line is, we want to know and that’s what we’re trying to do”.

With the US government becoming more forthright about UFO sightings, and people like NASA administrator Nelson expressing a commitment to figuring this out, we may stand to learn more on this hot topic over the next couple of years.

However, any kind of a breakthrough conclusion is likely to elude us for a while.