You Might Not Be Living In A 3-D Universe: Dr Subhash Kak's Dimension-Altering Answer To A Particularly Hard Problem About The Cosmos 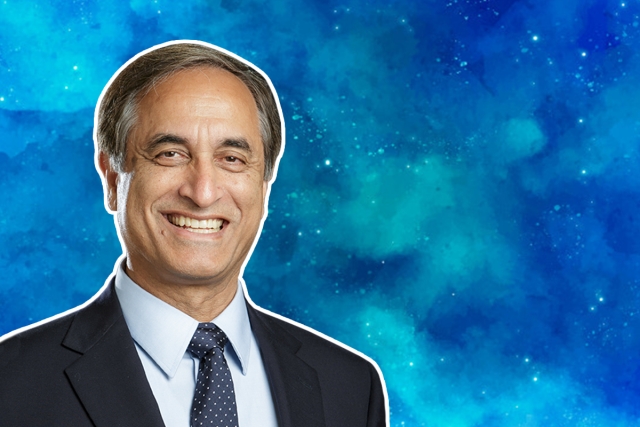 Recently, cosmologists have been puzzled by an unexpected discrepancy which they thought and hoped would vanish. But it has remained and is forcing physicists to rework the way we understand the origin and nature of the universe.

We all know that the universe is expanding. Hubble's constant is the value which measures the present rate of expansion of the universe.

This rate of expansion is worked out through two ways: one is to start from the 'early' universe and work our way forward, to the present.

The other is to start from the recent or 'late' universe and work the way backward to the point of origin. When worked out in both ways, the answer should be the same.

But it is not.

The cosmic microwave background (CMB) or the ‘early’ universe-based estimate of the Hubble’s constant gives the value of 67 km per second per Megaparsec (km s-1 Mpc-1).

As against this, the independent Megamaster Cosmology Project starts with galaxies with discs of water-bearing molecular gas, orbiting supermassive black holes at galaxy centers. These are the 'younger' galaxies.

Astrophysicists, using supernovae called ‘type Ia’ supernovae and periodic brightening-dimming stars called cephelids have been calculating the relative distance between them based on brightness. From this they calculated the value of the Hubble's constant. This provides the value of 73.9 km s-1 Mpc-1.

This March, an article in the ‘Scientific American’ discussing the problem stated: ‘And so cosmologists have begun entertaining the radical—yet not altogether unpalatable—possibility that the standard cosmological model is not as complete as they have assumed it to be.’ They are considering possibilities like ‘an uncertainty about the particle census of the universe’ or ‘the influence of dark energy changes over time’.

In November this year, mathematician Dr. Subhash Kak came up with a novel view of the universe that also provides a solution for this problem.

His solution was published in an article in Scientific Journal, a sister publication to Nature.

He proposes that space is not three-dimensional as we consider it to be but e-dimensional.

It is a number that cannot be expressed as a ratio. There are other such irrational numbers, the most famous of which is pi. ‘e’ is called Euler’s number and its value runs 2.71828… and on and on.

How do we visualize an e-dimensional universe?

According to Dr. Kak, the dimensionality of such a universe shall be ‘quite close to the fractal dimension associated with the Menger sponge’ which he points out ‘has a dimension of roughly 2.727.’

In the paper, he states that ‘since our cognitions are based on counting, we associate the nearest integer space of 3 dimensions to space which leads to our normal sense about its nature.’

This is a bold hypothesis. This can change the way we view the universe fundamentally.

We spoke with Dr. Subhash Kak about this new hypothesis and its implications.

Dr. Kak, according to your hypothesis, the three-dimensional space is actually a mathematical view we have imposed on reality?

SK: Nature is optimal and since there is a mathematical theorem that representation in e-dimensions is optimal, this should be the correct understanding of space. But our mind favours integers and as 3 is quite close to e, our intuition takes three-dimensions to be the correct description.

How does your hypothesis explain the origin of gravity? Einstein considered the gravitational field as the distortion of space and time. How does your theory explain gravity and its origin?

SK: Gravity is the most mysterious of the forces and although it is present everywhere scientists have not been able to unify it with the other forces. In the e-dimensional view of the universe, the spatial dimension is non-integer and for two objects in a line, it is less than one.

As an example, the dimension of 0.9 would mean that lengths would tend to become shorter by this fraction, and so there is potential for objects to fall towards each other. We can show that in such a situation the attractive force will be according to the inverse square law, as in gravitation. And by Occam’s razor, this should be the origin of gravitation.

You have mentioned Menger’s sponge. That is a very novel way of looking at the dimensions of the universe. How do you arrive at this strikingly novel visualization?

SK: A fractal is a shape that is self-replicating and scale-invariant. The Menger sponge is a deterministic fractal with dimension close to e but actual physical fractals are random and so it can only be a suggestive model.

Cosmologists have discovered that the stars and galaxies have a fractal structure and although the fractal dimension of the universe is not accurately known, one would expect it to be related to e-dimensions.

There has been a school of thought that Indian mathematics is more realistic accepting the physical reality than the Aristotelian (or even Pythagorean, with the school’s denial of irrational numbers) mathematics of European tradition. When you say in your paper that the Hubble’s constant discrepancy is because of the imposition of ‘a 3-dimensional gloss on our measurements’, in a way, is this a problem arising out of this European mathematical legacy?

SK: Indian physics going all the way back to Kanada’s Vaisesika Sutras, takes certain aspects of reality to be coloured by the nature of the mind. Kanada speaks of the samanya and the vishesha, the universal and the particular.

The vishesha are those aspects of reality that are the product of mind, whereas the samanya are the universals, which are the same for all observers.

It is true that European science and mathematics have been driven by search for axioms and an attempt to describe reality as mathematical structure. Indian science, on the other hand, has given primacy to the observer (the subject, that is to consciousness) and has been quite accepting of paradoxical aspects of reality that cannot be fitted into a machine-like description.

Indian science is more algorithmic, the most famous example of which is the 2500-year old Panini’s grammar, whose nearly 4,000 rules described Sanskrit grammar completely.

You have stated that this hypothesis leads to the ‘the counterintuitive idea of asymptotic freedom’. Can you please elaborate further on this?

SK: Asymptotic freedom is the notion that when certain objects (like quarks, which are the constituents of protons) come very close to each other, they don’t interact but when they are relatively far, they are strongly attracted, which keeps the proton stable and makes it impossibly hard to isolate quarks.

My theory indicates that as the dimensions of space fall below 2, the objects do not feel any force at all, whereas when the space associated with the objects is more expansive (dimensions greater than 2) there is a strong force. This dimensionality-based asymptotic freedom could be of value in the design of new materials with exotic properties.

SK: According to Vedanta, and echoed by the Copenhagen Interpretation of quantum theory, consciousness is not physical, and so my theory is not of any immediate use in understanding consciousness.

What the e-dimensional universe does is the view of space as a dynamic entity and not just a container in which objects such as stars and galaxies lie.

The new view makes it closer in conception to the ancient intuition of akasha. Remember, in the Indic view, the origin of the universe starts with consciousness that then transforms into akasha, which in turn engenders vayu and then fire, water, and earth, where these elements are constituents of physical reality and not the named materials.

From our current perspective, the most significant take-away of the new theory is the idea of dynamic space. In our current understanding, the interaction of consciousness and matter is seen best through the theory of the Quantum Zeno Effect that was advanced by Sudarshan and Misra over forty years ago, but the new theory may have applications there.

You have mentioned in your article that the research in e-dimensional universe can also help in development of space-travel technologies. Can you please explain how?

SK: First, it might help find resolution to the great crisis facing astronomy in that one needs to invoke 95 percent of dark matter and dark energy to understand why galaxies are moving at the speeds they are moving and why the universe is accelerating its expansion.

Experiments have given no evidence of dark matter and dark energy and if 95 per cent of the content of the universe is missing, isn’t it more likely that the basic framework needs to be changed?

The e-dimensional universe is a new paradigm that may help find a resolution to the problem of dark matter and dark energy and also help scientists devise new useful metamaterials, and advance the understanding of turbulence with applications to aerospace.