The Upcoming Urban Landscape Of India 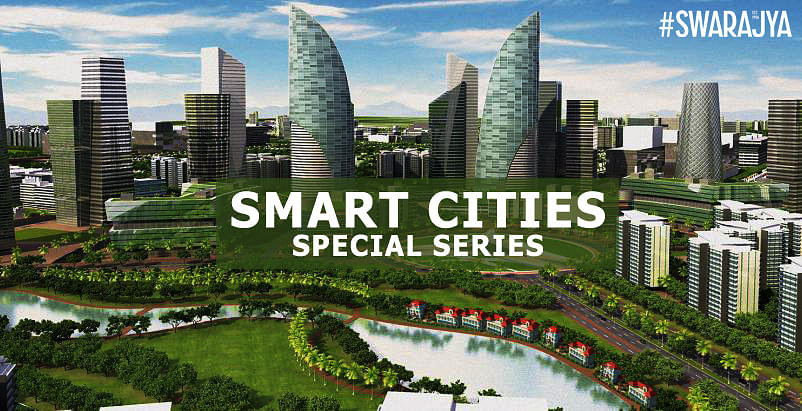 As part of the Smart City series, Swarajya brings a simple yet informative listicle of the types of cities India has, classified on the basis of the way they have evolved, their governance system and the activities they major in.

Our existing cities – New Delhi, Mumbai, Kolkata, Chennai and Bengaluru are the ones included in this category. Most will agree that these cities are presently decaying. Even worse are the conditions of what are classified as Tier-II, Tier-III and census towns.

The ‘new town’ concept has been around for a long time. The idea is to counter urban decay by creating new planned settlements far away from the big metropolitan cities, in order to avoid population aggregation in a packed urban space.

It was believed that these would over time help in building new communities and ensure that the parent metropolis remained healthy and survived longer. At times, new towns have also come to be called ‘satellite towns’, as they are attached to – and function along with – a parent metropolis.

Existing cities have had huge extensions similar to new towns. Some examples are Rohini, Dwarka and Narela as extensions to Delhi; Navi Mumbai to Mumbai; Salt Lake City to Kolkata; and Yelahanka and Kengeri to Bangalore. Noida, Greater Noida, Manesar, Pimpri-Chinchwad, Rajarhat, Dankuni, etc are other examples of such new towns.

Most states in India today have township policies. State governments, instead of developing land themselves, have now started encouraging the private real estate sector to develop them. The West Bengal government for example is now encouraging real estate builders into the cities of Siliguri, Bolpur, Asansol-Durgapur, Gajaldoba (Malda), Garia and Kalyani.

But often, conflicts arise and the basic motive of profit makes the realisation of the social objectives secondary. Unfortunately, most private sector real estate initiatives have ended up in developments which are too small and fragmented, and mostly catering to the wealthy population, making them far from inclusive.

Many industrial townships as part of steel plants or large PSUs have also been developed on modern lines from scratch. Bokaro, Bhilai, Rourkela and Vizag are such examples. In the private sector, Tata Steel’s town at Jamshedpur was the pioneer, and other large Indian corporates have also contributed to town building, largely to house their employees close to their factories. Over a period of time, these industrial townships have successfully provided a reasonably good quality of life to their residents.

The concept of private cities is gradually gaining acceptance in India. If all goes well, India should have at least 30 private cities across the country by the end of this decade. Today, there are private housing and commercial enclaves like those of DLF in Delhi and Hiranandani in Mumbai where the entire security, street maintenance and administration of the estate is managed by the developer.

5. Cities along the High-Speed Corridor

In many cases, if not all, retrofitting old cities with improved infrastructure and playing the ‘catch-up’ game is more expensive and difficult to implement. It is logical and quicker to build entire new smart cities from scratch instead. These new cities can take advantage of new transport infrastructure, such as the high-speed rail (HSR) on the Mumbai-Ahmedabad route. Studies have also been commissioned on six other high speed corridors after which implementation of these projects would begin.

The urban sprawl presently limited to 30-50 km from the city centre will change into 300-500 km long conurbations linking central business districts of multiple cities, forming urban economies of global scale and size. Once complete, HSR will convert southern cities such as Thiruvananthapuram, Bangalore and Chennai into one urban agglomeration with combined economies comparable to state-level GSDPs. Similarly, Delhi will be linked right up to Amritsar via Chandigarh and Ludhiana. People will live in Pune or Ahmedabad and work in Mumbai with HSR making this daily commute possible between cities.

These cities would also be frontiers of modern technology and forward looking urban planning techniques developed around HSR stations. These cities would typically house 0.5- 1.0 million residents over the next 10-15 years, spread over around 100 sq km, similar to the ones being developed along the Delhi Mumbai Industrial Corridor.

Then there are cities along the Delhi-Mumbai Industrial Corridor (DMIC), which will criss-cross six states.

The first of these cities would come up in Dholera investment region in Gujarat, 110 km from Ahmedabad. Others are Manesar-Bawal in Haryana, Indore-Mhow in Madhya Pradesh, and Dighi and Nasik-Igatpuri in Maharashtra -- all along the DMIC.

Later, 17 more cities are planned to be developed along a similar pattern. A total of 24 such new generation cities are being planned for phased development across UP, Haryana, Rajasthan, Madhya Pradesh, Gujarat and Maharashtra. The first phase will see seven of them opening their doors by 2018-19. The processes of acquiring land, getting government clearances and generating investment have already started. Plans are also in place to integrate these cities through new airports, new rail links and arteries of ten-lane highways.

The estimated cost of building the new cities varies from Rs 30,000 crore to Rs 75,000 crore at current prices, depending on their size. The central and state governments will carry the burden of financing trunk infrastructure while a public-private partnership model is being tried out for the first time to build houses, schools, hospitals and other facilities.

For the first time probably, an effort has been made to look at the future by putting in infrastructure ahead of the demand. Each city will have underground utility corridors for parking, sewage disposal and communication lines to give it a neat look and leave enough space for facilities that are missing in most existing cities, like pavements, parks and cycle tracks. Public transportation is designed to discourage the use of private vehicles. Planners have tried to ensure that some form of public transport is available within a 10-minute walk from home or office.

Such cities can also become benchmarks for older cities to adopt, or risk losing people as they would move away to these new centres.

Following the successful operationalization of the Delhi-Mumbai Corridor, similar projects have been planned pan-India. On these lines, the Chennai-Bangalore Industrial corridor and Chennai-Hyderabad Industrial Corridors are being developed. The focus of these corridors will be automobile and ancillaries in Chennai, aerospace in Bangalore and pharmaceuticals in Hyderabad. The Chennai-Bangalore Industrial corridor is expected to cover the cities of Ranipet and Hosur.

Social infrastructure is also encouraged along this corridor, being an integral part of any industrialization. The Karnataka government wants to extend this corridor to Belgaum and Mangalore with plans to integrate mining, food parks and cements as part of the corridor industries. Tamil Nadu government is also planning industrial corridors along the Chennai- Madurai-Tuticorin-Tirunelveli corridor and the Coimbatore-Salem corridor. These corridors are expected to encourage industrialization and integration of regional economies.

Billed as India’s first hill city since Independence, Lavasa is developed primarily by Hindustan Construction Company (HCC), India and is set amidst 7 hills and 60 km of lakefront and spread over 25,000 acres.

This hill station in Maharashtra has diverse work possibilities appealing to the IT and biotech industry, KPOs and R&D companies, and the world of art, fashion and animation. One of the largest private infrastructure projects in India, the city is planned for a permanent population of 0.2 million residents and a tourism inflow envisaged at 2 million per annum.

Gujarat International Finance Tech-City or GIFT is an under-construction city, about 12 kms from Ahmedabad International Airport. It will be built on 500 acres of land. Its main purpose is to provide high quality physical infrastructure (electricity, water, gas, district cooling, roads, telecoms and broadband), so that finance and technology firms can relocate their operations there from Mumbai, Bangalore and Gurgaon, where infrastructure is either inadequate or very expensive.

GIFT is conceptualized as a global financial and IT services hub, a first of its kind in India, designed to be at or above par with globally benchmarked financial centers such as Shinjuku, Tokyo, Lujiazui, Shanghai, La Defense, Paris, London Dockyards etc.