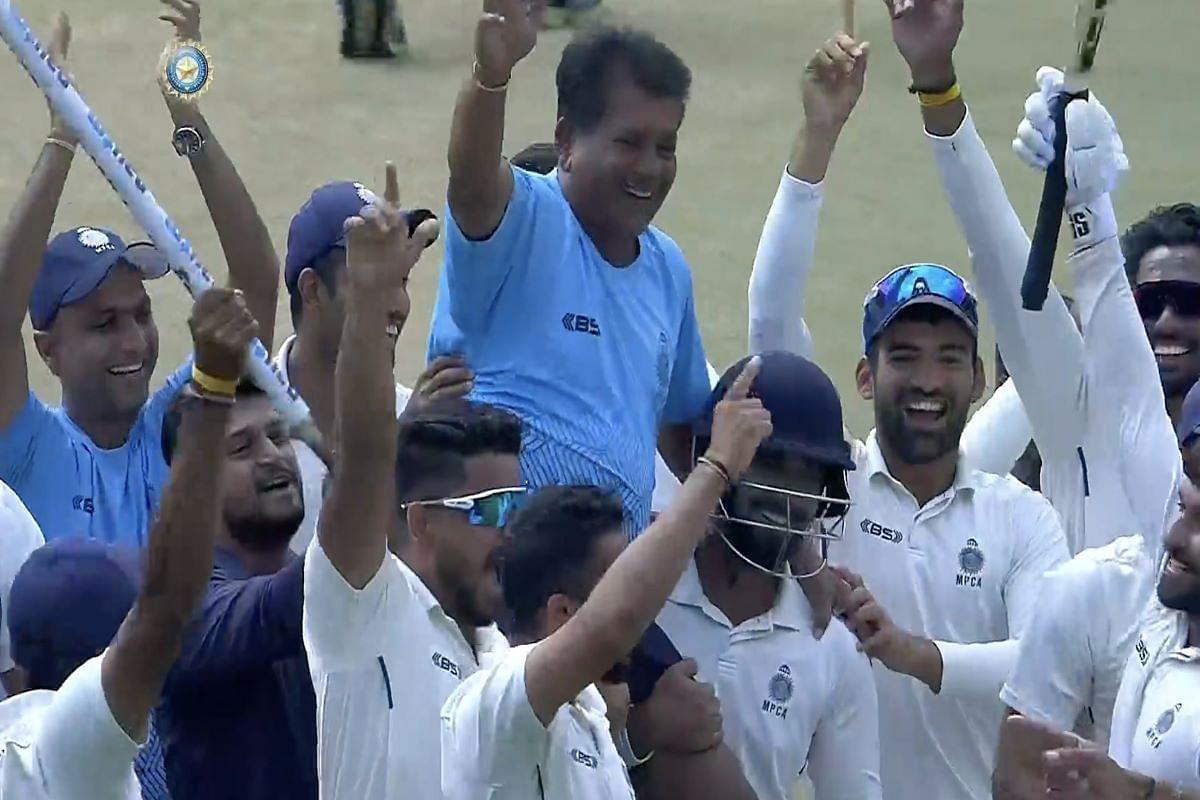 Madhya Pradesh, not considered among cricketing elites during the past decade, on Sunday humbled cricketing domestic powerhouse Mumbai by six wickets in a one-sided Ranji Trophy final under coach Chandrakant Pandit, who exorcised the ghosts of losing one at this very ground 23 summers ago.

On the final day, Mumbai could only manage 269 in their second innings, leaving MP with a paltry target of 108, and they did it in style as Pandit won a record sixth national title as a coach.

Sarfaraz Khan (45), who finished the season with 18 short of 1000 runs and young Suved Parkar (51) tried their bit, but with the need to attack at every opportunity, MP's Kumar Kartikeya (4/98) and the other bowlers knew that wickets would come their way.

While chasing, there were some hiccups, but with just over 100 to get, it was a stroll in the park for the MP team.

As they completed the victory, Pandit was flooded with memories (not happy ones), which he hasn't been able to erase for over two decades and despite winning five trophies as a coach.

It was here at the Chinnaswamy Stadium in the summer of 1999 when MP, despite a first-innings lead of 75, failed to win the game as Pandit, a proud captain, finished his playing career in tears.

Before the final, he spoke to PTI about divine intervention and circle of life and during the five days, sat in one corner with a white towel on his lap.

He has again proved to be an 'Alchemist', after guiding Vidarbha to four trophies (successive Ranji and Irani Cup), with a team that didn't have superstars.

The Yash Dubeys, Himanshu Mantris, Subham Sharmas, Gourav Yadavs or Saransh Jains aren't players who would give you the feeling that they are India prospects, the classy Rajat Patidar being an exception. But they gave enough indication that they aren't ready to concede even a micro millimetre without a good scrap.

They gave the Mumbai men a lesson in perfect execution of tactic with dollops of 'Khadoos' cricket, which many thought was a patent of the 41-time champions.

MP's win once again proved that the Ranji Trophy is often won by sides which don't have too many superstars or India prospects with ambition or wherewithal to play top-flight cricket.

It happened with Rajasthan when they had Hrishikesh Kanitkar, Akash Chopra during their triumph while Vidarbha had Wasim Jaffer and Ganesh Sathish guiding a bunch of youngsters.

In MP, there was no Avesh Khan or Venkatesh Iyer and had only an emerging potential star in Patidar, yet they followed Pandit's 'Gurukul' style of 'My Way or HighWay' coaching philosophy to emerge triumphant.

Since 2010, the Ranji Trophy, barring Karnataka's dominance for a few seasons and Mumbai winning it once, it has been won by teams like Rajasthan (twice), Vidarbha (twice), Saurashtra (once) and Madhya Pradesh, who would never be in contention in the past.

This shows that cricket has moved from the Shivaji Park, Azad Maidan or Cross Maidan in Mumbai, from the National Stadium in Delhi or the state-of-the-art camps in Bengaluru or Kolkata, to the hinterlands.

Bhopal's Yash Dubey, who had problems with his eye-sight during teenage years or Sultanpur's Kumar Kartikeya, who hadn't gone back home for nine years or Hoshangabad's Gourav Yadav, who would beat Prithvi Shaw's bat many times just for fun are men, who haven't had it easy.

When the Ranji Trophy started, the Madhya Pradesh cricket team wasn't even formed and it was back then known as Holkar, a princely state from the British era, which produced the country's finest cricketers – the charismatic Mushtaq Ali -- or the first ever captain of the Indian cricket team -- the great CK Nayudu.

Holkar was a formidable team till the 1950s before it was rechristened as Madhya Bharat and subsequently Madhya Pradesh.

MP, over the years, have produced some fine cricketers – spinners Narendra Hirwani and Rajesh Chauhan -- who had brief but eventful international careers.

Amay Khurasiya, who had finished his cricket some years before the IPL, where he would have been a rocking success.

And then there was the peerless Devendra Bundela, who was one of those unlucky middle-order batters, who played in the 1990s and 2000s when Sachin Tendulkar, Sourav Ganguly, Rahul Dravid and VVS Laxman were in their pomp.

But as a Ranji team, it never looked menacing save the occasional final they played 23 summers back under Pandit's captaincy.

However, this was a team that had enough self-belief and was ready to punch above its weight. They did it with aplomb through five days.

The Ranji Trophy deserves to be in the MPCA cabinet for the next one year.