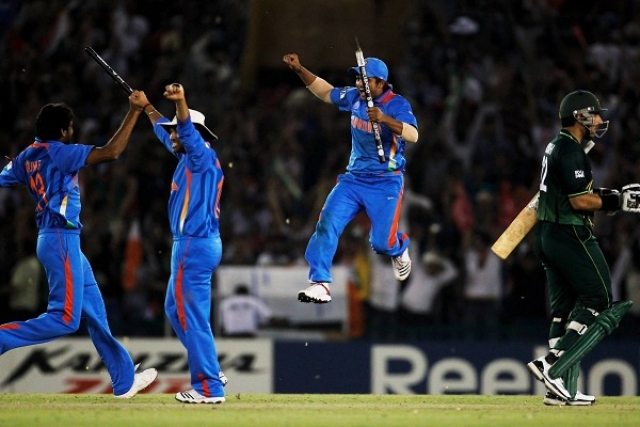 In a nation of 1.3 billion people, not more than a few hundred can claim to have seen a civilian aeroplane fly across the Indian airspace with the flag of Pakistan painted across its fin and rudder. The plane being referred to was flying the then prime minister of Pakistan, Yousuf Gilani, to the Chandigarh Airport an hour before the 2011 semi-final between India and Pakistan got underway at Mohali.

Queued outside the stadium, the spectators turned their eyes towards the plane coming in from the West, descending, as it prepared to land at the airport, only a few kilometres away from the Mohali stadium.

The sight of the plane was met with a huge cheer from the crowd, mostly comprising of Indians, including many who had paid more than Rs. 50,000 for a Rs. 500 ticket to witness history, in person. This was an emotion that transcended philosophy, practicality, and patriotism.

The One-Day International (ODI) history between India and Pakistan is spread across four decades. The first game was played in 1978 in Quetta, Pakistan. The last time these two teams met for an ODI was last year in Dubai, in a game that India won easily. Of the 131 games played between the two nations, Pakistan has won 73 while India has won 54 and 4 of them have ended without a result (perhaps, the 5th is on the cards).

When it comes to the International Cricket Council (ICC) World Cup (WC), they have met six times. In 1992, in a group game. In 1996, in a quarterfinal in Bangalore.

In June 1999, as the armed forces of India and Pakistan engaged in warfare at an altitude of over 8500 feet in Kargil, the two teams met in Manchester, the same venue for this year’s WC game.

In 2003, they met in South Africa, a day when Sachin alone wrecked the greatest ever Pakistani bowling trinity comprising of Wasim, Waqar, and Shoaib. In 2011, it was in Mohali, and in one of the most intense and media-hyped encounters in the history of cricket. In 2003 and 2011, a national holiday was declared across the country for people to enjoy the match.

By 2015, the rivalry found itself diluted by time as a new generation of sportsmen took over. This was the first WC encounter between India and Pakistan that did not feature the great Sachin Tendulkar. Yet, the game garnered sufficient viewership numbers and attention, with India going to win the match, its sixth WC victory on the trot.

The 2019 WC game between the two nations was scheduled over a year ago. Until mid-February this year, not many were even talking about it.

However, after the Pulwama attack, there was a call to boycott the game as a protest against Pakistan for sponsoring terrorism. While the idea was not practical, given the nature of the tournament, there was an opinion amongst many for BCCI to flex its muscles before the ICC and have Pakistan excluded from the WC instead, a point this author raised here.

A few days later, the strikes in Balakot followed. The next day, on February 27, the air-force of both the nations engaged in warfare that led to the capture of Wing Commander Abhinandan Varthaman in Pakistan Occupied Kashmir (POK). Since then, a diplomatic stand-off has prevailed between the two nations.

The last time things were this tense between the two nations before a WC encounter was in 1999, during the Kargil war. However, that was an era without digital or social media and personal internet connections. The world of 2019 is quite different.

Between 2015 and 2019, India has got more than 300 million people online, taking the count of cricket viewers to over 600 million. Thus, the flow of information is as quick as the ball that left Sachin’s bat towards the covers. It is this flow of content that finds the 2019 WC game hyped by online hysteria and ‘petty jingoism’--- as a few have chosen to describe it.

It all started with the jokes around Father’s Day. Then, a Pakistani channel aired a WC advertisement that mocked Wing Commander Abhinandan. This ad, racist and unnecessary, resulted in a surge of creativity on the Indian side. Independent creators got their own versions online, mocking Pakistan in turn. In a span of a few hours, the videos were viral. Suddenly, the game was about Pulwama, Balakot, Wg Cdr Abhinandan, terrorism, and a little bit of cricket.

While the India-Pakistan games, in recent years, did not inspire the same passion or jingoism that was routinely witnessed until 2011, today’s game finds itself burdened by the cricketing legacy between the two nations. This legacy comes sprinkled with the spices of politics, diplomacy, revenues, and viewership.

Firstly, no other pair of teams has such an elaborate history between their countries. India and Pakistan have fought three wars --- one of which resulted in a separate test-playing nation, Bangladesh --- and almost a fourth one this year. Thus, a game on the WC stage finds itself before viewers invested in the history of the countries, even though most of them may have merely read about it and not lived it.

Two, no other teams’ encounters inspire such a viewership. While the official viewership numbers fall in the range of 450-500 million for the 2011 and 2015 WC games between India and Pakistan, it is estimated that over a billion people will have access to the 2019 match on TV and the internet. All in all, over 1.5 billion people, or every fifth person on this planet, shall be an audience, willing or unwilling, to the coverage of the game live or in the print, digital, and TV media later on.

Three, it has always been the first go-to point in the diplomatic warfare between the two countries. In some instances, it has been a bridge. In 1987, the then president General Zia-ul-Haq of Pakistan came to Jaipur to see a test match between India and Pakistan. In 2006, the then president Pervez Musharraf was present at the presentation ceremony after the 3rd ODI in Lahore on India’s tour of Pakistan, where he famously remarked on Dhoni’s hairstyle, asking him not to go for a haircut.

The highest point in this bridge-building exercise came in 2011 when Mohali hosted the semi-final. The then prime minister Gilani from Pakistan and former prime minister Manmohan Singh met the teams before the game began, sat through the length of the game, and used the stage to strengthen diplomatic ties after the 2008 Mumbai attacks.

If cricket has been used to build bridges, it has also been used to destroy them. While the inaugural version of the Indian Premier League (IPL) saw spirited performances from Pakistan players in various teams, for the next 11 years, no players from Pakistan featured in the tournament, even though the support staff and TV show anchors had familiar cricketing personalities from Pakistan. In 2019, amidst the tensions after Pulwama, Pakistan banned the broadcast of IPL in their country.

Thus, cricket between the two nations has always found itself entangled with the current political and diplomatic situation. It’s something that the leaders have chosen to do for over three decades.

Four, it is in the interests of the broadcasters and media to create an artificial hype around the game. For the holders of broadcasting rights, it amounts to enhanced ad-revenues, as ad costs for an India-Pakistan game are far higher than any other India or WC league game. For the media, it is an event to gather greater viewership.

On TV shows with cringe-worthy animation, the result of the game becomes a testament to the geopolitical strength of their respective countries. It is the emotion linked to the game that is capitalised un-apologetically by some media groups on both sides.

Five, and most importantly, there is not much common between the two nations when it comes to competing as nations. Yes, there are the usual encounters in Hockey and Kabaddi, but no other sport or cultural event has the same reach as cricket. Clearly, with nothing to compare on the economic, social, scientific, defence, trade, or cultural front (sans the Coke Studio), it is cricket everyone turns to.

Lastly, the encounter has an emotional appeal to it. As Pakistan’s coach, Mickey Arthur, stated in a press conference yesterday, the game is an opportunity for Pakistan’s team members to become heroes and to go down as immortals in the nation’s cricketing history.

Even with all the practicality, the cricketing greats on both sides have often admitted to the emotions that run amok before such a game in interviews and memoirs. If the battle against Australia is that of skills and wits, against Pakistan it is that of skill and emotions. Clearly, it is no different for the fans.

The cheer that welcomed the sight of Gilani’s plane outside the Mohali stadium in 2011 was a testament to what cricket can do for both the nations. Today, as the countries face off (or hope to face off) for the seventh time on the WC stage, the players, somewhere in their minds, shall carry a fragment of that legacy in their minds. This is a game no team would want to lose.

However, even in defeat, there shall be a tomorrow for either team, as Pakistan learned after their six WC defeats and as India learned after losing the final of the 2017 Champions Trophy. There shall be another day, another game, after a loss, a win, or a washout.

The rivalry is not the end of the world, but today, it is all that shall matter in this world to passionate cricket fans on both sides of the Radcliffe line.