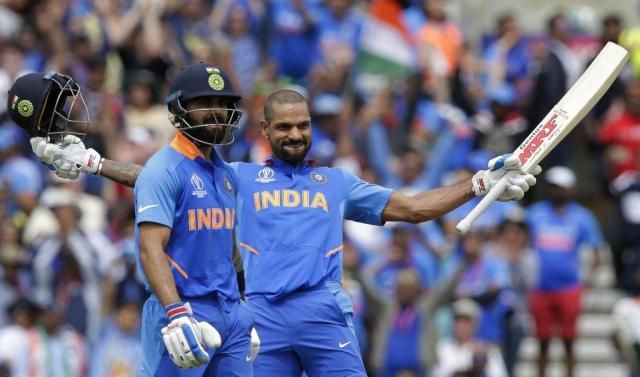 This is a cricket World Cup with many firsts. One, this is the first 50-over World Cup tournament without all the Test-playing nations participating, as Ireland and Zimbabwe find themselves excluded. Two, this is the first time since 1992 that the round-robin format is being used — a format that involves all the teams playing one game against every other team in the tournament — so all ten teams will play nine games each, with the top four making it to the semi-finals. Three, and most importantly, this will be the first World Cup where rain is going to be a bigger factor than the pitch or ground conditions.

When it comes to the round-robin format, it is different from what has been followed in the last six World Cup tournaments. Instead of dividing the teams into groups of four or six teams, the round-robin format warrants lesser number of teams because each team has to play a game against every other team. Thus, this is a format suited only for 10 teams or less, as we saw in the 1992 World Cup, where there were nine teams participating.

The International Cricket Council (ICC) was at the receiving end of a lot of criticism for excluding associate members from the cricket World Cup this year. For some cricketing Quixotes, the loss of associate members was the “death of cricket and its expansion” and the result of the “rogue capitalistic mentality” of the Board of Control for Cricket in India (BCCI). The numbers, however, tell a different story.

If one takes into account the performance of the associate members (currently non-Test playing nations) in the World Cup (WC), the story is that of dismal performances.

A general pattern observed across all previous World Cups — that included associate members — was that the top eight teams (usually from Test-playing nations) were sure to make it through the first group stage to the knockout one. This made the games between Test-playing nations and associate members an exercise in futility, and often, excruciatingly boring to watch.

For instance, in 1996, Zimbabwe (not an associate then) and Kenya from one group, and UAE and Netherlands from the other were played against four stronger teams in their respective groups. Of the 18 (of the 37 total WC) games played by these four teams, 15 ended in a defeat. And two of the three victories came in games played amongst the four teams.

In 1999, due to the change in format, six of the 12 teams qualified for the second stage. Again, Bangladesh (an associate member then), Kenya and Scotland were knocked out without a trace, losing all of their games (five each). The only upset in this WC was Zimbabwe qualifying ahead of England and Sri Lanka from their group.

In 2003, there were four associate members. While Netherlands, Namibia, and Canada sank without much ado, one of the biggest moments in the history of the World Cup cricket came when Kenya made it to the semi-finals, registering five of their six WC victories in 2003 itself. However, it must be noted that it was possible for Kenya to qualify for the semis because New Zealand refused to play in Kenya due to security concerns. Had that game happened, Kenya would have been knocked out in the first stage itself.

In 2007 there were six associate members and a total of 16 teams divided into four groups. In the history of WC tournaments this one touched the lowest point as — amongst other issues that plagued the teams at several points — Pakistan’s coach, Bob Woolmer, was found dead in a hotel room under inexplicable circumstances, India and Pakistan were knocked out in the first stage resulting in a staggering loss of viewership, and the final match was rain-curtailed. Bermuda, Kenya, Canada, the Netherlands and Scotland were knocked out in the first stage. Ireland moved to the second stage amongst the associates and then went on to lose six of their seven games in the round-robin format.

The 2011 version had four associate members. All four — Canada, the Netherlands, Ireland, and Kenya — were knocked out in the first stage itself. The high-point, however, came from the defeat England suffered at the hands of Ireland.

The story was the same in 2015. Ireland, Scotland, United Arab Emirates, and Afghanistan made it to the World Cup. All four were knocked out in the first stage.

Thus, sans a few exceptions, the general pattern from 1996 to 2015 was that of having 12-16 teams play the first stage, and have the top six-eight teams (usually the Test-playing ones) advance into the knockouts. By 2015, the exercise of having associate members had become pointless, for many games used to end in the first half itself.

This was not only having an adverse impact on the viewership, it also impacted the quality of cricket on display, and on the format, which was already struggling against the T20 league. Thus, in 2019, the ICC decided to hold the tournament without the associate members, and the early results are justifying this move.

In 2019, the round-robin format has almost guaranteed the early exit of South Africa from the WC after their first three games. With nine games at stake and six to win for a berth in the semis, the tournament ensures that every game has something at stake, given how instrumental the net run rate (NRR) is in the overall standing.

Justification for removal of associate members in 2019 World Cup tournament

The justification for eliminating associate members and restricting the WC to ten members can be summed up in four ways.

First, the case of Afghanistan. The rise of Afghanistan in less than a decade can be attributed to the giant strides it took in T20 cricket. Thus, for the future, associate members and its players must look to use the T20 stage as a stepping stone to participate or qualify for the 50-over World Cup.

Two, the Bangladesh model no longer works. Bangladesh — a team that has gradually evolved since the early 2000s — is the one that associate members must use as a role-model. However, Bangladesh’s cricketing buoyancy/ascendancy was helped by the long number of years it had to identify and train its teams, inflow of investments, lack of T20 cricket in the 2000s, and most importantly, some impeccable performances by its team members.

Ireland is currently treading on this same path. But unfortunately, the model does not work for Ireland as there are enough T20 leagues in the world that have displaced 50-over cricket at the local level.

Thus, for states like Ireland, Canada, the Netherlands, Scotland, UAE, Nepal, and so on, the focus should be on strengthening their T20 presence and having their players play across the globe in leagues across India, Pakistan, Australia, West Indies, and Bangladesh. None of these teams can afford to invest a decade or two in their 50-over performances alone.

Three, the round-robin format helps the 50-over game and the ICC. The World Cup matches must be about quality cricket played amongst teams that can offer tough competition, at least on paper. The usual exceptions, like that of Kenya in 2003 and Ireland in 2007, will happen, as evidenced by the defeat of South Africa against Bangladesh in the early days of this year’s World Cup. Moreover, the round-robin format will offer greater opportunities for teams ranked at eight, nine, and ten, and therefore, must be encouraged for the future World Cups.

Going forward, the ICC must encourage the round-robin format for the WCs. Already, the 2023 WC in India is slated to host 10 teams.

For the expansion of cricket, the ICC must find a way to partner with domestic leagues across the globe and have a tournament, once in every four years, where top domestic T20 franchises come together for a FIFA-like display. Not only will this help in the global expansion of the game, it will also offer a stage for players from the associate nations.

The T20 International World Cup league, which does not carry any incentive for international cricket — given how popular domestic leagues are — must be replaced with a FIFA-like T20 World Cup with domestic teams.

While some former cricketers have termed the exclusion of the ‘minnows’ or associates as disappointing, the bottom line remains that the cost of saving the game cannot be the game itself.