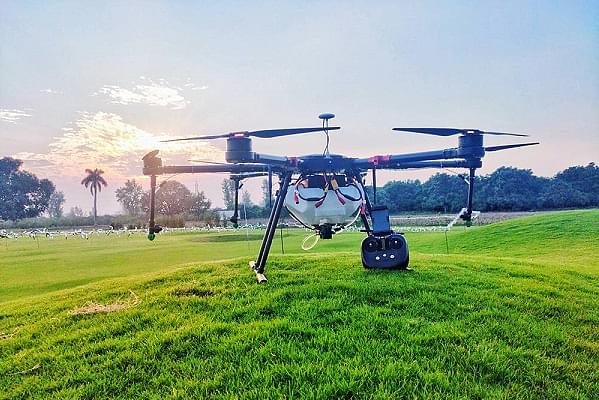 Garuda Aerospace-built White Knight drone has carried a payload of 40 kg in many disaster situations.

This week, four hospitals in Bengaluru have begun to use drones to deliver vaccines and medicines within their campuses.

Beyond their walls, other drones are helping to sanitize large swathes of Central Bangalore — an initiative of local MP PC Mohan.

Chief Minister B S Yediyurappa has promised to extend their use to ferry medicines and vaccines in the Karnataka capital.

Both trials have deployed drones manufactured by Chennai- headquartered Garuda Aerospace, an early start-up in the Unmanned Aerial Vehicle (UAV) space and now a pioneer in what its founder-Managing Director Agnishwar Jayaprakash calls Drones as a Service ( DoaS), operating over 300 drones all over India in agricultural (crop spraying), crowd surveillance and disaster management situations for over 40 — mostly government — departments.

To address the specific needs of the Covid pandemic, Garuda has designed a special drone, “White Knight” that can carry a payload of up to 40 kg with an endurance of 12 hours.

In the Prime Minister’s own constituency, the Varanasi Smart City project used Garuda drones to spray high rise and public buildings with disinfectant.

Garuda Aerospace is not alone, though it ranks among early players in the UAV space who have innovated to tweak the technology of drones to serve India’s special needs.

The state government of Telangana and Apollo Hospitals’ Healthnet Global initiative have jointly partnered with Medicine from the Sky, a World Economic Forum initiative, to enable and scale drone-based medical deliveries in the region.

It was a partnership first sealed two years ago at the India Economic Summit, long before Covid. But now, albeit under tragic circumstances, its time has come.

The first state in India to venture into medical delivery, via drone, Telangana sought interest from consortiums of start-ups and last year shortlisted 16.

Delivering medical goods using drones has been practised for over seven years. In 2014, “Doctors Without Borders” began testing the transport of diagnostic samples between remote clinics and central testing facilities during a tuberculosis outbreak in Papua New Guinea.

A big leap took place in Rwanda, Africa, where pilot projects morphed into national-scale implementations outside the urban centres, delivering blood on demand to those who needed it.

But the biggest opportunity, WEF feels, is within the Indian healthcare system, the equivalent of a $ 300-billion industry.

Writes Vignesh Santhanam, India lead of ‘Drones and Tomorrow’s Airspace’, at the World Economic Forum: “The (Telangana) project could have an immense impact on overhauling India’s cold-chain systems. With drones in place, the country’s healthcare sector could potentially witness large-scale deliveries of blood, long-tail medicines, samples and even organs throughout India and in the region.” (How drones could change the future of healthcare delivery)

The Hindu Businessline reports, on May 1, that Telangana has finally invited eight consortiums to participate in the Telangana project and the Union Civil Aviation Ministry, has granted necessary exemptions for trying out drones for medical delivery.

Trial flights of drones will take place this month in the Vikarabad district of Telangana with the Area Hospital as the take-off point and various Public Health Centres and sub-centres as landing sites.

Each drone will carry some real and some dummy vaccine packages.

A similar permission was granted to the Indian Council of Medical Research (ICMR) for conducting a feasibility study of Covid-19 vaccine delivery using drones, in collaboration with IIT-Kanpur.

That said, doubts have been raised whether effective drone-based delivery of emergency medicines or vaccines (from airport to hotel, avoiding the ground traffic) in the Covid-hit country can make any impact, given the complex regulatory regime and the multiple restrictive conditions imposed by the recently published Unmanned Aircraft System Rules 2021.

Even before any operator can even begin to deploy drones, multiple clearance from the local administration, the Ministry of Defence, the Ministry of Home Affairs, the Airports Authority of India and air defence clearance from the Indian Air Force have been made mandatory (Has no one in government responsible for this, heard of an oft-touted mantra called Single Window Clearance?)

Even were one to obtain all these clearances, every flight of every drone except for the micro light toy-sized drones, requires one to log the flight in advance.

Perhaps, most inhibiting for anyone who would like to address a serious application, all flights are currently limited to a 120-metre height restriction and Visual Line of Sight (VLOS) which effectively limits the range to about half a kilometre.

The Usual Suspects, security and safety, are touted as reasons why the government has restricted even the twin experiments of Telangana and IIT Kanpur to VLOS — for now.

The Economic Times quotes unnamed experts as saying the current clearances are “pointless” and will only delay the deployment of drones for vaccine delivery by at least one year.

So, is it a case of a timely technology throttled at birth by bureaucratic tape? Not quite.

Telangana at any rate is not giving up. As it commences its drone-based medical delivery trials, its Infotech department is hopeful that it will, very soon, be granted a licence for Beyond Visual Line of Sight (BVLOS) operation and this will enable it to launch full-fledged Covid vaccine shipment via drones around October.

NITI Aayog is said to have been apprised of the procedural logjam and has stepped in to try and accelerate the process that will allow India’s drone pioneers to address the immediate challenge of Covid medicine delivery — before it is all too late.

It is also known that even 10 months ago, the Civil Aviation Ministry picked a dozen larger players and gave them the go ahead to carry out drone trials beyond the visual line-of-sight. They included the Reliance-backed Asteria Aerospace, Nandan Nilekani-backed ShopX, Spicejet the airline people, and the Google-backed hyper local delivery player Dunzo.

So push is slowly coming to shove.

Said WEF’s Vignesh Santhanam, even a year ago: “The Ministry of Civil Aviation (has) created a special procedure for expediting drone flight requests for COVID-19 related applications through their online Digital Sky Platform, acknowledging the important role the technology can play in the current crisis.”

Adds Garuda’s Agnishwar Jayaprakash: “ Our drones can work over a range of 20 km and more. Given the go-ahead, I am sure they can bridge such distances, carrying life saving medicines across any terrain, urban or rural.” An alumnus of Harvard Business School and a former UN Youth Ambassador, Jayaprakash sees in the drones that he makes, an opportunity to pay back to his motherland big time, with technology that is at the right place in the right time, to help address a national challenge.

Of the trials due to be held in Telangana starting this week, AGI’s founder, Ankit Kumar says: “This is the first of its kind of trials being conducted. Even during this second wave of Covid, the Ministry of Civil Aviation and Director-General, Civil Aviation, MoCA and DGCA officials approved the trials. The trials would ideally validate the drone delivery mechanism for Covid vaccines. After completion of the trials, this could be adopted by the states and the centre to deliver Covid vaccines to multiple regional corridors on priority.”

Explains Kumar: " The trials will also assist in assessing conditions such as population, degree of isolation, geography etc to identify regions that specifically require drone deliveries."

The grant of these permissions is intended to achieve the dual objectives of faster vaccine delivery and improved healthcare access by limiting human exposure to Covid congested or Covid prone areas through aerial delivery; ensuring access to health care to the last mile, especially in remote areas; improving medical supply chain, especially with a third vaccine expected to be commissioned and millions of doses to be transported across India."