My Face Is My Boarding Pass 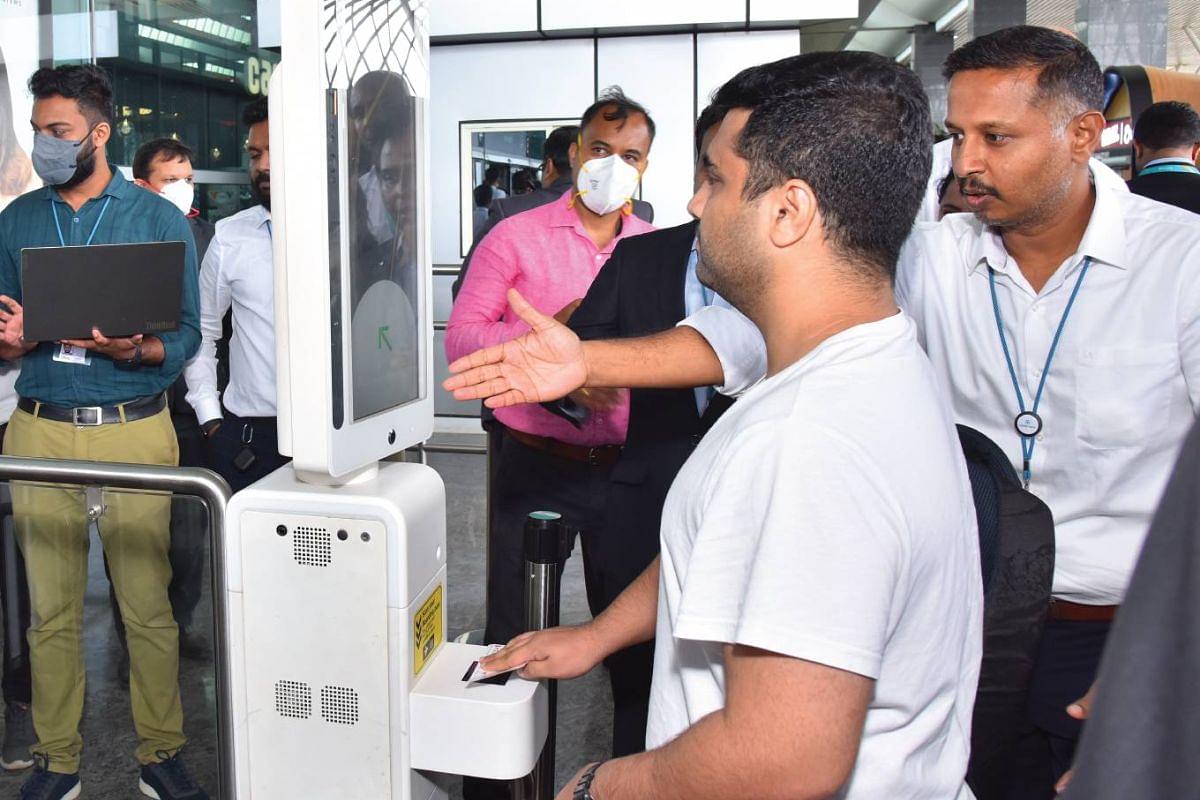 Staff at Kempegowda International Airport Bengaluru guide the first passenger to use the DigiYatra face recognition system on 15 August.

Almost simultaneously at Delhi and Bengaluru International airports on Independence Day earlier this week, a few hundred passengers were able to breeze through various security check points and complete their boarding formalities with minimal hassle.

All they had to do, was to look at scanners which examined their facial features, compared this with selfies that the travelers had uploaded from their homes and confirmed their identity – and all details of their travel document.

The era of facial recognition has come to air travel in India.

Passengers had downloaded an app called DigiYatra, which required them to upload their ticket details as well as a selfie, prior to reaching the airport.

Vistara Airlines and AirAsia are the two airlines that are currently integrated with DigiYatra and the two airports chosen to launch the facial recognition-based passenger processing were Delhi (Terminal 3) and Bengaluru International Airports.

Special gates at these airports were equipped with facial scan processors for entry, check-in and boarding – which allowed the users of the app to almost-entirely avoid queuing anywhere.

The app is currently available on Google Playstore for Android users, and an iOS version for Apple device, is expected shortly. The underlying Digital Yatra Central Ecosystem (DYCE) is the work of the not-for-profit DigiYatra Foundation, set up in 2019, with support from NITI Aayog, the Atal Innovation Mission ( AIM) and Amazon Web Services (AWS).

Its charter shareholders include Airport Authority of India (AAI) as well as the companies operating Kochi, Bengaluru, Delhi and Hyderabad International Airports. So, it’s a reasonable guess that Kochi and Mumbai will be the next in line, to facilitate DigiYatra-based boarding at their airports.

The software has been built on standards defined by the World Wide Web Consortium (W3C) which include Self Sovereign Identity (SSI) with Verifiable Credentials (VCs), Decentralised Identifiers (DIDs) with a trust layer of a Distributed Ledger and ensuring adoption of ‘Privacy by Design’ and ‘Privacy by Default’.

This ensures that passengers can safely share their data as it is fully secured and will be deleted after 24 hours.

As air travel opens up after nearly 30 months of Covid-related restrictions, more passengers are expected to embrace the advantage of a swift and contactless airport entry, check-in and flight boarding, with a simple selfie of their face and a quick upload that is no more cumbersome than a mobile phone or PC-based Web Check-in is today.

Indeed, by enabling face-recognition-based passenger services at airports, India is on the cusp of a global revolution and in the company of many international airports.

Beyond passenger operation, airports are seeing sense in putting face-based access control at many other points for perimeter protection, parking, traffic management and staff access control.

The Covid pandemic has made people everywhere very averse to any kind of physical contact. There was a time when access control to offices and factories using a thumb impression, rather than a human examination of a photo ID, was hailed as the height of technological progress.

Now, workers are reluctant to press their thumb on the same surface as that used by thousands of others: facial recognition is a neat solution to this challenge.

And that is because while the underlying technology is still a work in progress it is good in some situations if not all of them: Picking a wanted face using surveillance cameras, from a large moving crowd in a public place, after comparing in real-time with a database of wanted persons, is something hundreds of law enforcement agencies practice, world-wide.

What they admit to is the low success rate and the many problems caused by wrongful matching.

But in scenarios like this week’s airport initiative or in a typical office entry gate situation, where the back-end database is relatively very small (and the image to be compared is fairly recent), errors of recognition are virtually unknown.

The Vadodara-based Matrix Comsec, is a tech company focused on security and communications solutions for business.

Its made-in-India facial recognition technology and Artificial Intelligence-driven solution, “COSEC FR”, has been chosen by dozens of enterprises in India and abroad (notably in the UAE) for visitor management, staff access control, perimeter security and surveillance.

Matrix won the Time2Leap Award for Research and Development for designing and manufacturing its Face Recognition device.

The award was presented at the MSME Investor, Export and Innovation Summit in Delhi in April this year. The awards are given to companies whose products exemplify the spirit of Atmanirbhar Bharat.

Cutting out queues at expos

In any year, India used to see some 50 major special-interest (i.e. not for general public) exhibitions or expos, attracting crowds numbering anywhere from 20,000 to a lakh each.

Enabling access to pre-registered delegates has always been a logistical challenge, resulting in long queues at the entry points, where badges or credentials needed to be physically checked or electronically scanned.

In September 2019, as a media person, I was scheduled to attend the fourth edition of the "IoT India Congress" at the Lalit Ashok hotel in Bengaluru. The organisers – the UK-based Institution of Engineering and Technology (IET) -- invited delegates (entrance was free) to pre-register online with their official credentials, attaching a recent passport-sized photo.

For those who did – like me—the difference on reaching the venue was palpable.

Those who had not uploaded their photos joined long queues, marked “A to E”, “F to J” etc, sorting them by surname, to have their IDs checked.

Those who had pre-loaded their photos were directed to a special section with no queues, where you stood and stared at a shoulder-level camera which scanned your face and opened the barrier --- all in 5 seconds.

This was the first use case in India of the use of facial recognition for admitting delegates to an event – and my own first exposure to the technology.

Scenting a story, I spoke to the agency which had installed the facial scanning gates and learned that the entire system including cameras and the recognition software was made in the Puducherry factory of Chennai-based Magnetic FAAC India Pvt Ltd, the Indian subsidiary of Schopfheim (Germany)-headquartered Magnetic Autocontrol GMBH.

The intervening Covid years with no physical events may have put some breaks, but in 2022, most big conferences and trade shows have gone hybrid or all physical – one can only hope that facial recognition will be harnessed more widely to lessen delegate hassles, even as other Indian airports get ready for their customers to say: My face is my boarding pass!

Also Read: As Chip Packaging Industry Shows Signs Of Taking Off In India, Here Is A Primer For Beginners