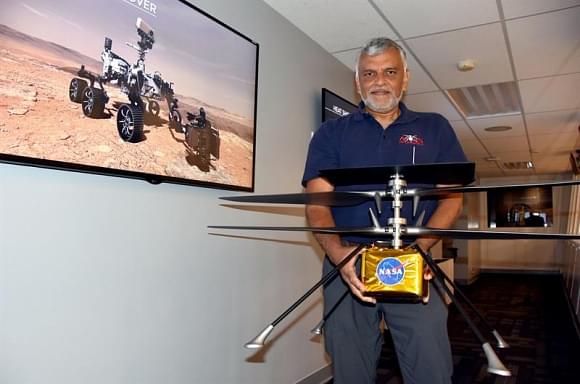 History was created on 19 April when NASA’s ‘Ingenuity’ helicopter took a flight above the dust surface on Mars, making it the first powered flight on another planet.

While the flight success on Mars — NASA's Wright Brothers Moment —turned into one of the most popular topics on social media platforms, an Indian-origin engineer’s name also came under the spotlight who had this idea of flying on the Red Planet for years.

He is ‘Bob Balaram’, the Chief Engineer for NASA’s Mars Helicopter Project.

Balaram graduated from IIT-Madras in 1980 and studied B.Tech, Mechanical Engineering at the prestigious institute.

After graduation, he did his master's and PhD in computer and systems engineering from Rensselaer Polytechnic Institute.

Since his childhood, he was fascinated by rockets and the interest in space grew more than ever when he heard about the Apollo Moon mission on the radio.

His passion came to fruition on Monday after a robotic helicopter named Ingenuity made space exploration history on Mars.

Balaram has been working at NASA's Jet Propulsion Laboratory for 35 years as a robotics technologist.

The idea of developing a helicopter dawned upon Balaram during a conference in the 1990s. As per NASA JPL, a veteran in robotics technology and Stanford professor Ilan Kroo talked about a miniature airborne vehicle for Earth applications called "mesicopter" during the event.

That was the time when Balaram thought that why not use such miniature spacecraft on Mars.

Later, he came up with a joint proposal with Stanford for a NASA Research Announcement submission and recruited a company called AeroVironment for the same.

But at that time the proposal did not get selected for funding and almost remained forgotten for over a decade and a half.

Several years later, then JPL director, Charles Elachi had a similar idea of flying drones and helicopters on Mars.

He came to know about Balaram’s research in the same area. He asked the Indian-origin engineer to submit a new proposal for the space agency’s 2020 Mars mission.

The small spacecraft was first selected for technology development and risk reduction.

Later, when Mimi Aung became Mars Helicopter project manager and the team of engineers worked on risk reduction, NASA agreed to fund the helicopter for flight as a technology demonstration.

But the challenging part was to make sure that the helicopter can fly in the ultrathin atmosphere of Mars.

So as a result, a 19.3-inch-tall, four-pound rotorcraft was designed that included four specially made carbon-fibre blades, arranged into two four-foot-long counter-rotating rotors which spin at around 2,400 rpm.

The project manager, Aung said: "Bob is the inventor of our Mars Helicopter. He innovated the design and followed up on that vision to its fruition as a chief engineer through all phases of design, development and test."

She also said that whenever the team encountered technical roadblocks, Balaram was there to propose potential solutions.

However, the man behind this history-making spacecraft is the recipient of two NASA awards and eight New Technology awards.

Since the preparation started to develop the Ingenuity helicopter, he monitored all phases of design, development and test as chief engineer of the project.

According to NASA, “Over the next three sols, the helicopter team will receive and analyze all data and imagery from the test and formulate a plan for the second experimental test flight, scheduled for no earlier than April 22.”