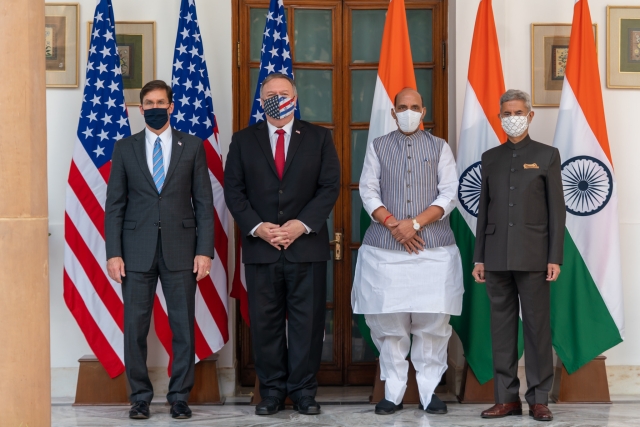 The US and Indian delegations.

The 2+2 dialogue between the Indian defence and foreign affairs ministers, which is intended to checkmate Chinese expansionism, has an echo of sorts in the e-tailing sphere.

Here, though, it will be 2 vs 2, with two Indian giants squaring off against two US giants at the (possible) cost of the Chinese.

The Tatas and Ambanis will take on Amazon and Walmart, and it will come at the cost of Chinese companies if it continues its military brinkmanship on India’s borders.

The future of retailing is omnichannel, and it needs loads of cash. If anyone needed any convincing about this reality, the proposed takeover of Big Basket, the online grocery delivery company, by the Tatas for around $1 billion for a majority stake should dispel any doubts.

Before this report, we had Amazon trying to block the sale of Future Group (Big Bazaar, etc) to Reliance Industries for nearly Rs 25,000 crore; Walmart-backed Flipkart pipped Amazon to obtain a 7.8 per cent stake in Aditya Birla Fashion and Retail for just under Rs 1,500 crore; it had additionally bought 27 per cent in Arvind Brands for Rs 260 crore; Amazon (along with private equity firm Samara) bought a controlling interest in Birla’s other retail outfit, the More supermarkets chain, for over Rs 4,000 crore and is now investing even more.

We got intimations of the great consolidation between online and offline when Jio Platforms grew out of the Jio telecom network to create a platform for e-commerce that included Jio Mart; the subsequent efforts to get foreign investors into Reliance Retail, coupled with the (now stuck) purchase of Future’s Big Bazaar and related businesses, showed that Mukesh Ambani no longer thinks of his telecom, platforms and retail businesses as unrelated to one another.

It is a high-stakes game, and it is now clear who the big boys will be in Indian retailing, logistics and warehousing.

There will be two big domestic players, Tatas and Ambanis, and two big foreign players, US-based Walmart (through Flipkart) and Amazon.

One could have visualised a fifth Godzilla in the same space, but given the state of India-China border tensions that could still lead to war, the Chinese have essentially locked themselves out of the Indian market.

Thank you, Xi Jinping. That was smart strategy if the end-goal was to abandon your biggest growth market to western and Indian rivals.

In fact, if the Tatas ultimately get a majority stake in Big Basket, they will be sidelining the Chinese Alibaba group, which is currently the biggest investor in this grocery delivery company.

The Tatas are doing India a favour by elbowing out Alibaba, which is subservient to Chinese dictates. The grocery outfit will now complement the offline Tata apparel retailing company WestSide, Titan, and the consumer products businesses of Tata Chemicals and Tata Global Beverages, which are merging into one megacorp.

From manufacturing to retailing, the Tatas will now have an end-to-end linkage.

The only thing Ratan Tata will be regretting is the sale of his FMCG company Tomco to Unilever (then Hindustan Lever Ltd) in the 1990s, and Lakme later in that decade.

Today, FMCG, apparel, groceries and electronic goods are the route to retail volumes, whether online or offline. Tata is buying his way back in after exiting many of these businesses for a song a quarter century ago.

The key to running any omnichannel business — offline, online — is cash. Oodles of it.

Building a long-term franchise for effectively commoditised products that are delivered to the home at deep discounts needs long-term, ultra-patient capital, and this means the groups getting into this area must have sources of endless cash.

The reason why Kishore Biyani of Future Group, and Kumar Mangalam Birla have had to bail out is that they don’t have these cash gushers within their groups.

Reliance has this in its oil-to-chemicals business, which is what enabled it to fund Jio, Jio Platforms and Reliance Retail.

Now both these businesses will attract their own share of patient capital for the next investment binge.

Amazon and Flipkart, of course, have their cash generating US businesses to bankroll their cash-guzzling Indian operations.

In the case of the Tatas, their only big cash generator is Tata Consultancy Services, which is 74 per cent owned by the group holding company Tata Sons.

But Tata Sons has two challenges looming ahead: it has to buy out the Pallonji Mistry group, which owns over 18 per cent in Tata Sons, and thus a similar proportion in TCS.

The second challenge is to fund some of the capital requirements of those parts of the Tata group that still need cash infusions, including Tata Power and Tata Motors.

But the Tatas do have patient capital of their own. As long as they don’t blow it up in losing businesses, including a possible purchase of Air India, they can keep their hat in the retail ring.