70 Years Of UN Resolution 181: When The World Stamped Its Approval For Formation Of Israel 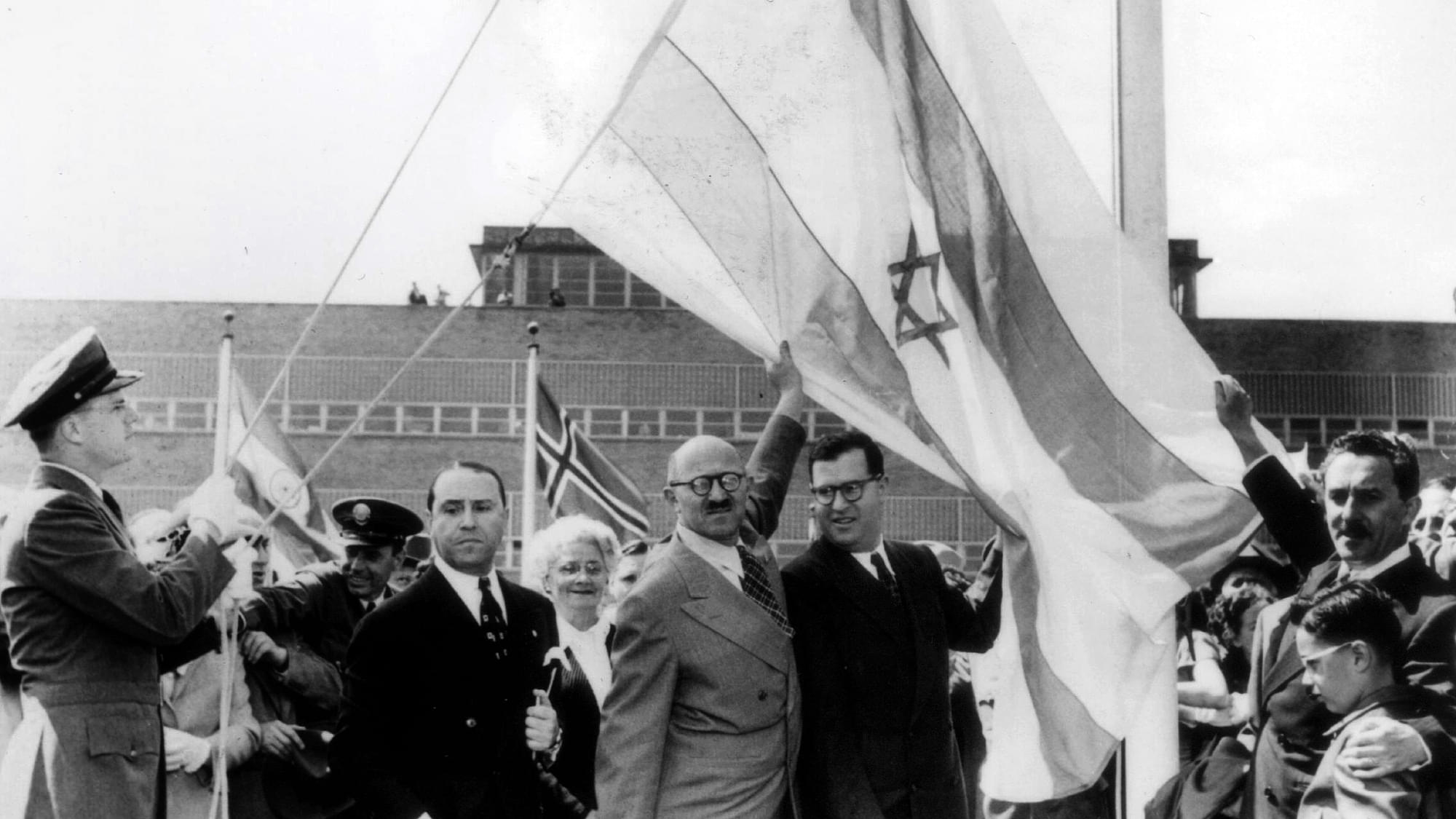 Moshe Sharett (C), Abba Eban (2nd R) and David Hacohen (R), raise what would become the Israeli flag after the United Nations decided to approve the partition of Palestine November 29, 1947 in New York. (Photo by GPO via Getty Images)

Panama...yes; Paraguay...yes; Peru...yes. As Philippines voted next in favour of the partition plan for Palestine, cheering broke out across the yishuv in the British mandate of Palestine. It was late in the evening as the news from Flushing Meadows crackled over radio sets in the Middle East. In essence, the British had announced their intention to abandon the Mandate and it was up to the locals to pick up the scraps of civilisation from the mess left behind. On 29 November 1947, United Nations Resolution 181 created legal ground for the formation of a Jewish state partitioned from the Arab domains of the region. The State of Israel had not been declared yet - that would have to wait until 14 May 1948 - or the fifth of Iyar if you want to get all Jewish about it - the day before the British mandate formally ended.

Seventy years hence, there is an air of inevitability around the story of the partition. Israel's march from strength to strength makes the tense moments of its past seem like mere signposts to the present generation. However, the United Nations resolution came in the midst of tumult among even Zionist ranks, not all of whom were supportive of the partition plan. The Levant was a powder keg, something that would become customary over the decades. International opinion had been against the Jews and flipped at the last minute with some impressive Zionist diplomacy and an inexplicable Soviet change of heart. Although the United States has long been presented as Israel's saviour at this crucial moment, the Soviet Union (and its four satellite nations) had a larger role to play than many realise.

In the immediate aftermath of the Jewish diplomatic victory in New York, riots broke out across Palestine. Angry Arab mobs attacked Jewish shops and residences to punish them for the partition plan and to dissuade them from further political audacity. The formal war would come later, the day after the declaration of the State of Israel, when the fledgling Jewish state's six Arab neighbours would invade it. In the meantime, however, Jewish blood flowed in a frenzy of disorganised violence. In a single week in March 1948, over a 100 Jews were killed.

Zionist leaders had predicted such a reaction and had prepared themselves well. In their experience, the British government could not be trusted - in the past, they had stood by as Arabs massacred Jews and even intervened to disarm Jewish defence groups to place them at the mercy of the Arabs. In April 1947, the Haganah had little more than 10,000 rifles and less than 3,000 machine guns of poor quality and varying calibers; by independence, David Ben Gurion had almost tripled the Jewish arsenal and even added a couple of dozen Messerschmitts left over from World War II. In addition, a fund-raising drive by Golda Meir in the United States had garnered $50 million for the new Jewish state.

The plan to "save Israel" had been put into play since at least July 1945, when Ben Gurion met with 18 millionaires at the residence of his friend, Rudolph Sonnenborn. Under the guise of shipping medical equipment to hospitals, the Sonnenborn Institute would collect funds to purchase arms for the future Israeli military. Ben Gurion was fully aware that Washington's feelings on Zionism were lukewarm at best and he was willing to evict the British, weakened by war, from Palestine by force if necessary. London, however, announced in February 1947 that it would leave Palestine by 15 May of the following year.

When war did break out six months after the passing of UN Resolution 181, the Western powers imposed a strict embargo against arms in the region. This seemingly fair step only helped the Arabs, who not only had established armies but also had British officers to consult with and train under. Israel had to use some clever tricks to procure arms: in one case, a sympathiser posed as a Hollywood producer interested in making a war film and smuggled all the props of his set to Israel. The bulk of the assistance came, as several of the founding generation attested, from the Soviet bloc. A vital purchase from Czechoslovakia, obviously approved by Moscow, saw Israel through the darkest days of its short existence.

Diplomatically too, as Martin Kramer has recently written in Mosaic, the creation of Israel was forged largely through unexpected Soviet support. Zionist leaders such as Ben Gurion and Chaim Weizmann had long argued the Jewish case at the court of the Red tsar, particularly through the Soviet envoy to Britain, Ivan Maisky, but lack of sufficient access to Soviet archives has kept still kept a mystery the reason Stalin eventually allowed the vote to play out as it did. Despite their egalitarian dystopia, the Bolsheviks were only marginally less anti-Semitic than the prevailing currents in Europe. The vote, therefore, was a total surprise even to experienced Eastern Europe hands among the Zionists.

The United States' role in the creation of Israel has been hyped beyond compare, Harry Truman even anointing himself a modern-day Cyrus, after the Persian emperor who liberated the Jews from Babylonian captivity, in a November 1953 speech to the Jewish Theological Seminary in New York. Yet like the British Balfour Declaration, a seemingly pivotal moment in Jewish history tarnished by its context of the White Paper of 1922, the US vote in favour of the creation of Israel was followed by a declaration that partition was impossible to implement and the British mandate be temporarily passed on to the United Nations. Even on the eve of Israeli independence, US diplomats were still busy warning Zionist leaders to defer from statehood.

Besides the superpowers, the international community - perhaps with some transient shame for the Shoah - voted overwhelmingly in favour of the partition of Palestine into a Jewish state. Only Cuba, Greece, and India, along with Muslim countries, voted against partition. The final tally was 33 countries for the resolution, and 13 against, with 10 abstentions and one absence.

The military and political dimensions aside, Resolution 181 was not a completely kosher proposal even in its terms. The Arabs resented it for obvious reasons - they saw European Jews as usurpers of the land, if not a theologically inferior people - and there was no way the holy sites of the Scriptures could be surrendered to them. There was also some power play involved in the Arab position: Haj Amin al-Husseini aspired to build an independent Palestinian state out of the partition, while King Abdullah of Transjordan (Jordan attained its modern name in 1949) sought to annex the remains of Mandatory Palestine into the rest, which was his own kingdom. To this end, the king even negotiated in secret with Jewish representatives to foil Husseini's bid for a separate state.

A not insignificant minority of Zionists were also unhappy with the partition plan. They argued that the mandate had already been partitioned once in April 1921 when Arab Jordan was created from 77 per cent of the Mandatory domains; why should there be a further partition to deprive the Jews of even the little that was left? If the Arabs wanted a state out of the Mandate, they already had one in Jordan.

The Revisionist Zionists, led by Ze'ev Jabotinsky until his demise in 1942, had argued that Israel should extend across the river Jordan such that all the Biblical holy sites fell in the Holy Land. The Smol Ha'Yarden, a poem by Jabotinsky that later became one of Betar's famous songs, encapsulated this ideal extent of Israel's borders as that of the British Mandate. Several Zionists were unwilling to give up Judea and Samaria, what is today more commonly known as the West Bank, because it holds so many of their religious places.

This was not an uncommon view even among those who were more receptive to Resolution 181. Ben Gurion, Israel's first prime minister, pleaded with his colleagues that they accept the UN resolution as it would constitute a formal international endorsement - for the first time - of the Jewish state. If the boundaries of the plan were not to their liking, he told them, they could later be redrawn. It was with careful thought, thus, that the boundaries of Israel were not announced in the declaration of independence. In fact, one of Ben Gurion's biographers, Michael Bar Zohar, reveals that the prime minister clung to this notion even during the Suez Crisis of 1956, withdrawing Israeli forces from Sinai with great reluctance and only after repeated pressure from US president Dwight Eisenhower. The southern boundary was finally set, despite fierce domestic disapproval, only in 1979 during the Camp David accords between Menachem Begin and Anwar Sadat.

Between the in-house Zionist squabbles, the Arab machinations, and the international warm-up to the Cold War, a narrow window of opportunity opened for a brief moment for the creation of Israel and was quickly shut. The political tumult of the past is obscured in the light of Israel's military, economic, and political successes. Almost two thousand years after the last Jewish king - Herod Agrippa II -  had ruled, Israel would rise up again. And just as when it had fallen last, it had no allies but those it might be lent for a fleeting moment by time. Like Galba, Otho, and Vitellius; like Maisky, Andrei Gromyko, and, perhaps, Stalin.